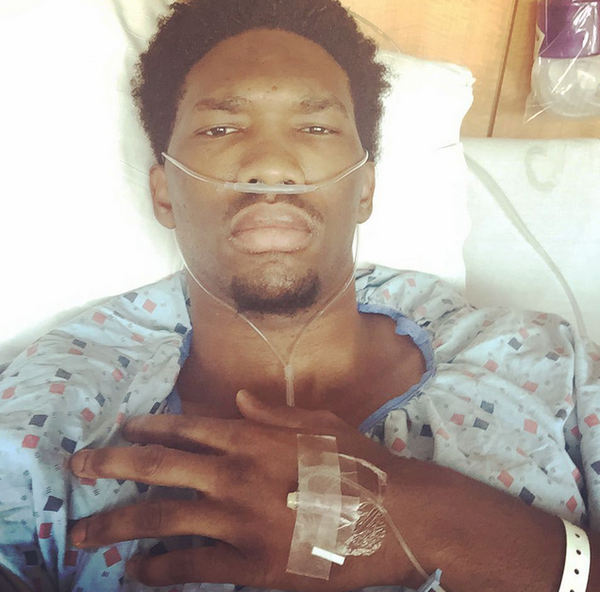 Well, we hope he did, at least.

Late Tuesday night, the Sixers released this statement regarding a surgery update on Joel Embiid, being remarkably transparent rather quickly given how the team [Hinkie] has been so secretive of Embiid’s injury.

“Everyone involved – our organization, Joel, and his agent Darren Matsubara of Wasserman Media Group – worked diligently to assemble this highly sought after group of professionals. The goal was simple: Provide the best possible care for Joel to maximize his opportunity for a long and successful NBA career.”

Well, that’s a sigh of relief. I think. Maybe. More.

“Joel Embiid underwent a procedure this morning to address the existing fracture site of his right foot navicular bone.

“Visual inspection suggested good vascularity of the bone. We replaced the two existing screws and performed a bone graft of the site using bone from his hip.

“We were able to identify that bone’s integrity was even better than expected and has been put in a great position to support full recovery.

“The entire procedure lasted approximately three hours and there were no complications.”

“Following the procedure this morning, I had a chance to debrief with the medical staff, Darren Matsubara and Joel’s parents.  All of us were collectively encouraged by the feedback we received.

Yoooohoooooo! I need one. Those chocolate drinks are amazing. But, really, the best Sixers move this offseason was releasing a statement regarding the team of surgeons they drafted to try to fix Embiid’s foot.

I guess that’s something?