The Phillies have officially announced and introduced their new GM, Matt Klentak. Klentak becomes the 11th Phillies GM and has worked with Andy MacPhail before, in Baltimore.

Klentak and MacPhail have worked together before to complete transactions for a rebuilding club, but MacPhail said they he did not hire him to be a “yes-man.” He was looking for someone whose goals and expectations aligned with his but who won’t back down or shy away from disagreeing with him.

I really like the way he speaks directly, intelligently, with confidence and purpose. Who knows if this is the guy that will turn this all around, but God I sure hope he is. Also, yes he is young, but we should not hold that against him. Shouldn’t the fact that he’s young and risen steadily to this point be considered a good thing?

Quotes from the press conference:

Klentak on the rebuilding process and timeline:

“Look at what’s on display in the World Series right now. Two clubs that have gone through very disciplined rebuilds, but two clubs that have had very different time frames for doing it. And I think it’s important to realize — and I’m not saying it just to say it — the players will dictate that.”

Klentak on the current state of the Phillies roster:

“There’s a really strong foundation of players in this organization, some of whom are in the big leagues and some of whom are coming. I think that, coupled with the first pick in the draft, the largest international bonus pool this year, the first priority in the waiver period, the first pick in the Rule 5 draft, et cetera, et cetera, creates some inherent advantages, at least in the short term, that are incredible. And I think if we do our jobs right, we will turn this into a winner and it’s gonna be fun for a long time.”

Klentak on having a vision for a roster:

“Sometimes that came with making tough decisions, such as trading Howie Kendrick, who was an All-Star-caliber player in the prime of his career. Trading Mark Trumbo, who wasn’t even yet arbitration-eligible, for two young pitchers. Those are tough organizational decisions, but you make them when you know what you’re trying to build towards. I feel like a combination of all of my career stops fit very well with this organization, both what is needed today but also what we hope to grow into in the long term.”

Middleton on former operating flaws of the Phillies:

Middleton on whether the Phillies were late to the analytics game:

“Yeah. It was kind of a cultural thing. It’s just the way people viewed their jobs.”

Middleton on catching up to other teams:

“It’s like Alice in Wonderland. You keep running faster and faster and stay in the same place. So the teams that are ahead of us, they’re not sitting still. The aggressive ones are trying to improve and get better. We have to run faster and faster.”

Middleton on winning being cyclical:

“Our objective is to challenge that. If you look at St. Louis, they found a way to sustain it. And if St. Louis thinks they’re cycling down, if you look at their down years, their down years aren’t our down years. So we need to figure out what they’re doing, so if they’re not in the playoffs or if they’re not a legitimate contender going into a season, how do they stay up at a higher level of being down than we have?”

Middleton on building through free agency:

Here are some more take aways from the introduction: 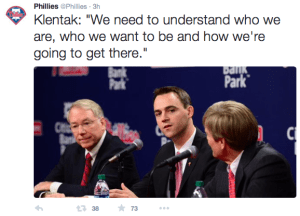 Pretty excited after that press conference. Klentak seems poised and sharp. John Middleton is the man, he gets it. I'm pumped @johnmiddleton

And a funny one for good measure:

Quotes via Phillies and CSN Philly