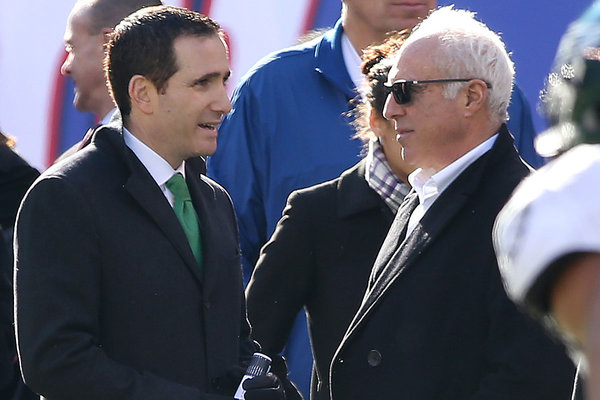 Sal Paolantonio joined Mike Missanelli on 97.5 The Fanatic yesterday for his weekly spot, and even though the two had a heated exchange last month on the air that resulted in Missanelli hanging up on Sal Pal, it seems like all is good in Fanaticland. For the moment.

Paolantonio had some interesting things to say during his stop with Missanelli, which included the possibility of the Eagles trading down in the draft in an effort to “recoup” what was lost from Chip Kelly trading away this year’s second round pick last year.

Now, we know Sal Pal’s notorious for slinging some shit across the airwaves. Hell, while listening to him on the radio, you might have felt and smelled something rancid on your face while listening to him talk. But this is interesting, because it’s what SAL IS HEARING! And it might, just might, have some credence to it.

Sal Pal: I think draft-wise, in my opinion – what I’m hearing, from what they might consider doing – is at 13, try to drop down a little bit and recoup the loss of that second round pick that Chip Kelly shipped to St. Louis for Sam Bradford. Pick up an extra pick – maybe an early third, maybe a late second.

Missanelli: And still take an offensive lineman in that situation?

Sal Pal: Absolutely. No question. But in free agency, in my view, what I hear is that they’re gonna go guard. Guard, safety, linebacker, maybe corner.”

That wasn’t all Paolantonio had to say. He also said the team is considering moving Eric Rowe back to safety from the cornerback position.

What I’m hearing, Michael, is that they’re interested in moving Eric Rowe back to safety. And if they do that, they won’t sign a safety. They’ll go after a corner, or draft a corner, or both.

Rowe played safety his first three years in college, which is described as Rowe’s “natural” position. This could mean the Eagles might try to retain Walter Thurmond, but they’d have to be pretty creative to afford him, according to Thurmond himself. Maxwell, Thurmond, Rowe and Jenkins in the secondary? Not too shabby.

Listen to the entire Sal Pal interview, courtesy of 97.5 The Fanatic, below.