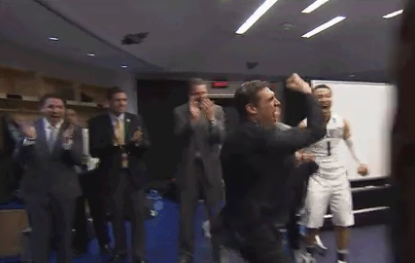 Villanova is heading to the Sweet 16 for the first time since 2009. They absolutely dominated an Iowa team that in all likelihood shouldn’t have been playing them after Adam Woodbury blatantly pushed off Mike Gesell to put in a buzzer-beating shot. And nobody can say that he didn’t:

St. Joe’s lost a heartbreaker to number one seed Oregon, but it wasn’t nearly the type of game anyone expected. St. Joe’s had Oregon down for the count and let them back up and then decided to play some pretty bad basketball at the worst part of the game, and wound up losing. There’s not much to say here other than St. Joe’s pretty much gave the game away. They should’ve won. They gave Oregon the opportunity to get back in the game. They had a 7 point lead with minutes left. Then they got tight and turned the ball over way too many times.

It’s just infuriating. Would anyone have expected them to win? No. But that doesn’t make it any better. Like, at all. It makes it even more heartbreaking. But, “That’s Philly,” am I right, Cliff Lee?

We’ll have a recap of each of their respective games a little bit later.

Godfatherlocks.com:March Madness is almost here! Why wait to place a wager during tourney time, when GF is making money now. NBA & NCAA hoops are in full swing, be sure to check out Godfatherlocks.com now!

When your team is down at the half, but you're still feeling it 🔥

This is how you erase a 12-point deficit in 35 seconds. https://t.co/l3eJ83wDDB #MarchMadness

Heartbreaker. The downside of March.

Texas A&M was down by 12 points with 44 seconds left in regulation, by the way.

Phil Martelli asked a reporter after Friday’s win if they sold marijuana in Spokane.

A nasty scene occurred in Maryvale, Arizona yesterday as the Brewers and Dodgers played a spring training game. Rymer Liriano, outfielder for the Brewers, was hit by a fastball in his face accidentally by Dodgers pitcher, Matt West. He was apparently

Here’s video of the incident:

We couldn’t really see it from the field. The guys were saying that his nose was gushing blood and it really hadn’t stopped when he came in here,” Elmore said in the clubhouse.

“They said it just ticked the side of his helmet and got his cheek area. You know that the sound is different. That slap against the flesh. That’s when you know it’s not good,” he said.

There’s a report floating around that the Sixers allowed Joel Embiid to delay his second surgery so he could enjoy his summer last year. More on that later.

In terrible news, Ravens cornerback Tray Walker passed away after getting in a dirtbike accident.

Some people forget stuff that isn’t a couple days old. That was the case late last week when news from last year made its way to the forefront locally for some reason. And here’s really everything you need to know.

RG3 could be Cleveland bound.

"Jay Wright is fired up" might be underselling this fist pump pic.twitter.com/iFqd2xX507

I might or might not be in the majority in this, but Adam LaRoche retiring because his son couldn’t be by his side on and off the field is just weird. And what’s even weirder is that MLB clubs agreed to an apparently stipulation that Drake LaRoche must be allowed to do whatever he wants at all times.

Now, certain players have said Drake was never in the way and his involvement was never a problem. So, did the White Sox just decide this, three weeks into spring training, out of nowhere? I doubt it. Anyway, the fact this story got so blown up is ridiculous.

The Flyers hit a wall on Saturday and were completely dominated by the Penguins. Not something many people around here was looking forward to. They still have two games left against the Penguins and one against the Red Wings, so it isn’t over by a long shot. But Saturday’s game – one of the Flyers’ worst of the season – could have some damaging effects down the stretch.

Speaking of the Flyers, goaltender Michal Neuvirth will be out three weeks with a lower-body injury.

A recap of your Eagles’ stories for the week.

Kevin Durant said he loves being in Philly. And we went ahead and had some fun with it.
Here’s a fantastic column by Joseph Santoliquito on WWE announcer Mauro Ranallo’s battle with bipolar disorder.

Everybody in Brooklyn became a huge fan of young sports writer Max from SI for Kids. Especially the Villanova team! pic.twitter.com/bsejdgxb1p

Everyone should hate Notre Dame for this ending yesterday. And guess who visited the locker room after the game? Our favorite terrible politician, Chris Christie. [Washington Post]

But this time, the New Jersey governor has a pretty good excuse. Not only does his daughter Sarah attend that university, she’s apparently a student manager for the men’s basketball team. In addition, he is close with Irish head coach Mike Brey.

On the other hand, not only does Christie love the Cowboys, but he’s also the most prominent politician who has come out strongly in support of Donald Trump. So, yeah, shameless front-runner.

Gawker was ordered to pay Hulk Hogan $115 million in damages after a Florida jury decided the website posting a sex tape of him from years ago was a little too much of an invasion of privacy. Gawker’s expected to appeal the decision.

But that’s not all. Punitive damages leveed against Gawker could inflate Hogan’s settlement a lot more.

The jury will decide next week how much to tack on by way of punitive damages, which are designed to punish defendants for intentional wrongdoing.

The Florida Supreme Court generally tolerates punitive damage awards that are 2 to 3 times the amount of compensatory damages. Anything more than 3 times is dicey … the Court often slices excessive judgments down to size.

But 3 times compensatory damages would be a whopping $345 million, added to the $115 mil compensatory judgment, that would give Hulk a grand total of $460 million.

Atlanta won’t get a Super Bowl if Georgia passes an Anti-Gay bill.

This is pretty awesome. Reigning National League Rookie of the Year, Kris Bryant, pranked a college baseball team as he posed as a transfer student trying to make the team at Mesa Community College in Arizona.

These two somehow walked away from this crash during a Forumula One race.

Nothing good happens after midnight.

Taylor Swift had a busy weekend.

Donald Trump protesters shut down an Arizona highway for a period of time on Saturday ahead of of one of his rallies.

Video posted on news website Arizona Central’s Facebook page showed a truck driving through a large group of protesters. Officers from the county police department worked to clear demonstrators from the motorist’s path.

A woman is seen crying and shouting for officers to take responsibility to stop the vehicle, while a deputy sheriff shrugs at the suggestion.

No surprise, it was an old, white guy.

That deputy sheriff is either a wanker, or a Trump supporter. One in the same, actually.

It’s quite a scene when Trump supporters get so butthurt they don’t know how to handle it except punch and kick people.

Check out myself and Vaughn Johnson at McFadden’s at the Ballpark tonight before WWE’s Monday Night Raw. We’ll be heading over to McFadden’s around 5 P.M., so come say hey.