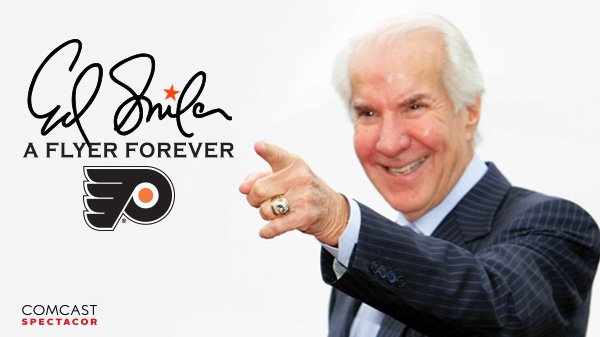 We have sad news to report here. Flyers Chairman Ed Snider has passed away at the age of 83 after his fight with Cancer. On Saturday, a few days before Snider’s passing, the Flyers found a way to make the NHL Playoffs, where they will play the Capitals. A bunch of the players had mentioned that some of their motivation recently was in part due to wanting to fight for Snider. Snider will go down as one of the best Owners ever. He was the heart and soul of the team and he would do anything for this team.

Together with Comcast Spectacor, we mourn the loss of Chairman and Founder Ed Snider → https://t.co/V5X6QibEO4 pic.twitter.com/vr5bVd7PEa

His children released the following statement:

“We are deeply saddened to announce that our father, Ed Snider has died after a two year battle with cancer. He was 83. Our Dad was loved and admired for his big heart, generosity of spirit, and dedication to his family. Despite his considerable business achievements and public profile, he was first and foremost a family man. He never missed a birthday, important family event or the opportunity to offer encouragement. We turned first to him for advice in our personal and professional lives. We grew up tagging behind him in arenas, stadiums and locker rooms; and his players, management and team personnel were our extended family. He treated his employees with respect regardless of rank or position, and the man they called “Mr. Snider” always would have preferred simply to be called “Ed.” From him we learned the importance of helping others and the value of supporting our community and beyond. He was a man with deep convictions and never hesitated to promote causes in which he believed. His children and grandchildren will continue his philanthropic mission for years to come through the work of the Ed Snider Youth Hockey Foundation (Snider Hockey) and the Snider Foundation. Revered in his adopted city of Philadelphia, we too were captive in the orbit of his brilliant light and magnetic personality. During his lifetime, he cultivated a cherished circle of friends whom he loved dearly–and who loved him back–whether in Washington, DC, Monmouth, Maine, Philadelphia or Montecito, California. Unrivaled, however, was his love for the Philadelphia Flyers Hockey Club, the team he created 50 years ago and to which he remained fiercely devoted through his final days. With every game during the push to make the playoffs this spring we hoped he would survive to see the Flyers win just one more game. He gave the last ounce of his indomitable energy and strength to live through this hockey season, but now the Flyers must win without him. He fought his last years, months and days with courage and grace and recounted his love for many including his Flyers family and fans. We are grateful for the outpouring of love and support from the community, his friends and all those who were fortunate to have been touched by him in some way, large or small.”

Comcast Chairman and CEO Brian Roberts said, “This is a very sad day for Ed’s family, the Flyers, Comcast Spectacor and his many fans in Philadelphia. Our business partnership lasted more than 20 years, which seemed improbable at the time, and ultimately transcended into a cherished and special friendship. We are so sad but relish the many accomplishments Ed achieved during his amazing lifetime. He was completely unique, incredibly passionate and will be terribly missed.”

Comcast Spectacor President and CEO Dave Scott said, “Ed Snider was and will always be the heart and soul of our company. His entrepreneurial spirit was the foundation for many contributions to the sport of hockey and to the sports and entertainment industry in general. He will be forever remembered for his loyalty and his impact will endure forever in the hearts of countless Flyers players, coaches, team and company employees, both past and present. In addition, Ed was a generous philanthropist who cared for people in ways the public never saw. His enduring legacy through the Ed Snider Youth Hockey Foundation will live on in generations of young people who will learn about his values of integrity and hard work. Our thoughts and prayers are with his wife, Lin, his children — Craig, Jay, Lindy, Tina, Sarena and Sam; and all of his grandchildren.”

Philadelphia Flyers President Paul Holmgren said, “Today, the Philadelphia Flyers, the city of Philadelphia and the National Hockey League have lost a true icon. Mr. Snider is the face of the Flyers franchise. He is revered and loved by all of his current and former players and has the utmost respect of the entire hockey world. Mr. Snider’s passion and drive to be the best has made the Flyers brand one of the most recognizable in all of sports. His desire to always have the best team possible for this city and for our fans is a true testament to his passion for the Flyers and his will to win. On this sad day, our thoughts and prayers are with Mr. Snider’s wife, Lin; his children — Craig, Jay, Lindy, Tina, Sarena and Sam; as well as all of his grandchildren. Mr. Snider will be truly missed by all of us but his spirit along with the culture he created and instilled will live on with the Flyers organization forever.”

Per the website, “Funeral services will be private. There will be a public remembrance ceremony at the Wells Fargo Center in the near future to celebrate Mr. Snider’s incredible life. In lieu of flowers, contributions may be made to the Ed Snider Youth Hockey Foundation and the Philadelphia Flyers Charities.”

R.I.P. Ed Snider! You will be missed.