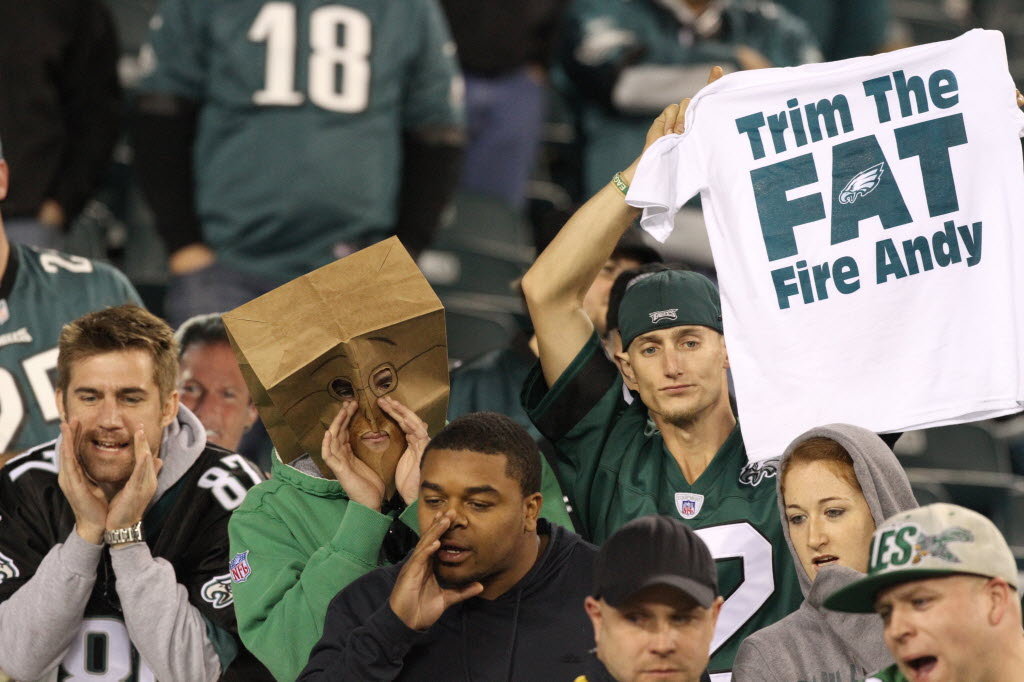 Every time a new incident occurs – when that one asshole throws a beer bottle at Ryan Howard, when a select few toss batteries at J.D. Drew and when some drunk [maybe not all drunk] idiots toss rubber bracelets onto the ice during a brutal playoff beatdown – we’re reminded of our past.

Then come the columns and lists of the 10 worst Philadelphia sports fans moments.

“They threw snowballs at Santa.” That’s always the first joke. Seriously, how sick are you of hearing that? It’s not original and it happened 48 goddamn years ago. Get some new material.

Tim McManus of Philly Mag wrote a great piece Friday about the player-fan dynamic in Philadelphia. It’s just different here. The culture and atmosphere can be a shock to an athlete’s system.

McManus quoted some Eagles players about this, and there’s some pretty riveting and eye-opening stuff.

I loved this one from Connor Barwin:

I think the unique thing about Philadelphia compared to other places, a lot of cities — especially if you look down south — Houston, Charlotte — if you look at the history of our country, they’re really kind of newer cities and there’s a lot of people moving to those cities,” he said. “Philadelphia is the birthplace of America, right? Football has been here for what 80, 90 years. It’s a lot of the same families, the same fans for decades on top of decades on top of decades. So that’s where I think you see the difference from Philadelphia compared to other cities. Even New York City, you have  a lot of people moving in and out of New York City. Philadelphia, it’s generations upon generations of the same families that have been following the Eagles.”

Barwin gets it, but not too many else do.

Jordan Matthews believes there are just two reasons for a fan to get on an athlete, bad attitude and lack of effort. Considering Philadelphia is a blue-collar town, an athlete can become easily beloved if he puts forth a little effort. Just don’t lollygag and join the other side of the spectrum.

Matthews also explained that “nobody’s a tougher critic on a top athlete than himself”:

You think Ryan Howard goes out there and he wants to bat whatever he’s batting?…I can go from personal experience: we come here every day and we want to get a job done just as bad as anybody. Nobody is a harder critic on a top athlete than himself. So as many beer bottles as you want to throw, we’re throwing just as many at ourselves personally. So there’s no reason for it.”

Not that they’re naive as to where some of the frustration comes from. Our conversations over the past week, in fact, revealed that a good number of the current players are very much in tune with the city they play for. Matthews likened the fans to a proud father who just wants to see his boys do well. “Mess up he’s pissed, but that next Sunday, get back out there! Do your best!.” Brandon Graham also linked it to family. “It’s like a love-hate relationship: love you one minute, hate you the next, but they’re always going to ride with you,” he said.

The second paragraph from McManus was very well put. With a lot of losing and a lot of heartbreak comes baggage. We’ve been scarred, battered and bruised. It’s seemingly one countless disappointment after another in this town.

McManus delved into a theory that you have to be wired a certain way to make it in this city. While most of the Eagles players agreed with that assessment, Jon Dorenbos was the one who didn’t:

Not true. I don’t think you have to be wired a certain way, you just have to know how you’re wired, and then be true to that,” he said. “And also be true to the fact that these fans care. So just understand the different dynamics and the different interpretation of what the team means to you as a player and what the team means to them as a fan, and if you can understand and appreciate that, then the player will embrace the fan and the fan will embrace the player.

“Just because a fan boos doesn’t mean they don’t care, it doesn’t mean they’re not knowledgeable, it doesn’t mean any of that. It means they want to win just as bad as we do. They eat, drink and sleep Philadelphia Eagles. They have a passion for it. And you know what? As a fan, too, it’s more than just a game to them, it’s a tradition. It’s spending time with their family and friends since they can remember. It’s maybe the one time that the uncles and aunts got together and laughed and had fun and barbequed and maybe that was every Sunday, who knows?

“It goes a lot deeper than just a game. When you embrace yourself in that culture you become one of them, and it’s cool.”

A lot of what Dorenbos said is how I feel. This is Philadelphia. We’re just more passionate than everybody else.

So, what do you guys think? Do you think the players make sense? Do you agree or disagree with their assessment? How do you think the relationship between the professional athletes in this city and its fans should be? Is it fine the way it is? More respect? Too much respect? Let us know.

Even though we have that select few which puts our reputation at risk every time they do something despicable, it’s not like we’re the only fan base that does it. It’s all a matter of perception.

For every idiot who throws a beer bottle at Ryan Howard, there was the scene earlier this season of LeBron James receiving a standing ovation for becoming the youngest player to reach 25,000 points. He might be despised, but he’s respected.

You won’t be seeing any lists of the 10 best Philadelphia sports fans moments, however. Seriously, type that into a google search and find out what pops up.

And speaking of respecting effort and that blue-collar mentality. How about when the Sixers fans applauded a loss to the defending NBA Champions Golden State Warriors this past year?

You won’t be seeing any columns on that either.

These are just a pair of examples off the top of my head, there’s countless others. The perception of the Philadelphia sports fan is never going to change. Sports Illustrated is going to continue naming us the most hated fan base in the country. We’re going to continue to get bashed every time some imbecile does something foolish.

It is what it is.

We just had to pelt Santa with snowballs.