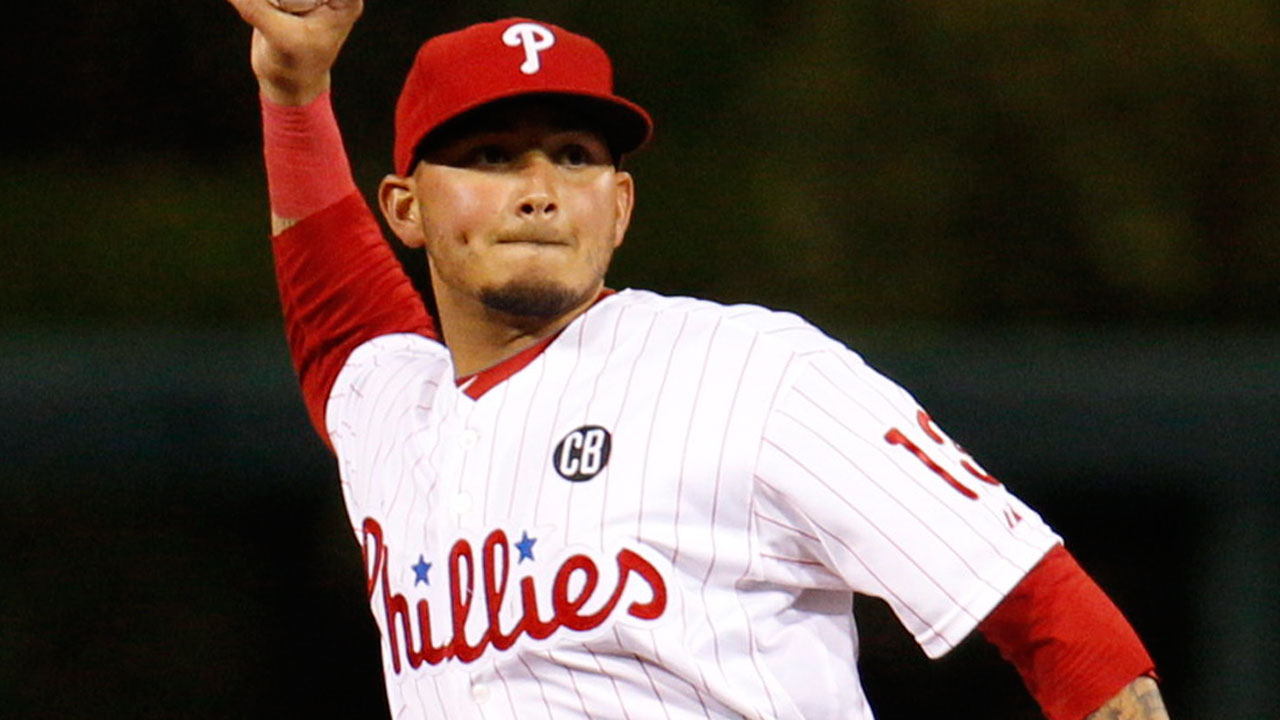 With the 2016 season over for the Philadelphia Phillies, it is now time to quickly reflect on who currently has lockers to clean out and if that player will even have  a locker in Philly in 2017. Over the next few days, we’ll look at each position group, as it 25-man roster stood on the final day of the season, and evaluate whether that player will be back with the major league club next season or not.

To start, we look at the infielders.

Andres Blanco: Blanco has been involved with the Phillies organization since 2012, working his way up the ranks. His one-year deal he signed last winter to avoid arbitration is done and both he and the team have a decision to make. Blanco earned $1.45 million in 2016, which was reasonable for a player who logged just under 200 at-bats and hit .253 this season. The 32-year old served multiple roles as a pinch-hitter and as a utility infielder, making multiple starts at third base while Maikel Franco was sidelined with injuries this season. I’d expect Blanco to want more more for another one-year deal, and may even command that with a small market for him this off-season, however, I don’t think the Phillies will be interested in an aging utility infielder with multiple young players available in the infield. Blanco won’t return in 2017.

Emmanual Burriss: Burriss is becoming a journeyman at a relative young age of 31. The Phillies are the fourth team for the 31 year old in just four years of major league service. The D.C. native signed a one-year minor league deal for $925,000 for the 2016 campaign, but saw plenty of playing time in the majors. Burriss didn’t exactly take advantage of his opportunities in the show, however, especially at the plate. He was 5-45 hitting and scored three runs as he was utilized more for his defensive abilities. Burriss’s struggles in 2016 mean he won’t be a hot commodity this off-season, if the price is right, the Phillies would be interested in bringing him back on another one-year, minor league deal, for 2017.

Maikel Franco: Oddly enough, Franco is set to become a free-agent this offseason. According to Baseball Prospectus, Franco signed a one-year deal worth $517,500 for the 2016 season. At that price point, the young hot corner general was a steal this season. Despite being plagued by nagging minor injuries throughout the season, Franco managed to hit .255 this season, hit 25 homeruns, and drive in 88 runs. The Dominican Republic native is a big cornerstone of the future for the Phillies and should be in line for a solid payday in the coming months. Franco is back for 2017 and the foreseeable future.

Freddy Galvis: Galvis served as the Phillies starting shortstop this season with a roller coaster season. He did finish strong though to boost his season numbers. He finished with a .241 batting average and a .274 on base percentage. The 26-year old Galvis seems like he has been part of the Phillies big-league club for longer than he actually has, but does he have a future with the team? He signed a one-year deal for 2016, to avoid arbitration, worth $2 million, so he could be on the move. Galvis has been a Phillie his entire career, as the team signed him as a free-agent out of Venezuela. He has had one-year deals his entire career and I think that will happen again for 2017.

Cesar Hernandez: Just like the aforementioned Galvis, Hernandez has been a Phillie for the duration of his career, making a living off of one-year deals. 2016 was his sixth year with the organization and his deal was worth $525,000, which is a great deal for the Phillies, considering Hernandez was the top-of-the-lineup hitter and starting second baseman for the entire season. Additionally, Hernandez was the leading hitter on the team with a .294 average, not including A.J. Ellis, who played only 11 games in red pinstripes this season. This deal worked out well for the Phillies, who I suspect will bring him back again for 2017, maybe even for a little bit more money.

Ryan Howard: You all know the answer to this one and it simply comes down to a numbers game. Howard was given his rightful send-off during the last game of the season, marking the end of an era. The Big Piece was due $23 million in 2017 if he played for the Phillies, but he is still in line for the $10 million buyout as it appears his days in the City of Brotherly Love are over. I believe Howard will find a home in the American League next season, but he will not be back at first base for the Phillies in 2017.

Tommy Joseph: As we saw Joseph replace Howard in the ninth inning of the season finale to allow for one last ovation for Howard, that was also symbolically passing the torch of first base from Howard to Joseph. Joseph was here on a one-year deal and exceeded expectations in the major leagues. He finished the season with a .257 batting average and 21 homeruns, showing he deserves the full-time starting position. Joseph will be back in 2017.

Darin Ruf: With each passing day, Ruf is becoming more and more like Dom Brown. Once highly regarded as one of the best prospects in the Phillies system, Ruf has flatlined in the last 18 months, showing that he may never sustain success in professional baseball higher than Triple-A. Ruf started the season in the majors, but was quickly sent down after struggling mightily at the plate. He finished the 2016 campaign back on the big league roster, but with only 83 at-bats and a .205 batting average. According to Baseball Prospectus, Ruf had a one-year deal for 2016, leaving the door open for his departure this off-season. It is going to be a somewhat tough decision for GM Matt Klentak and the front office, however, I believe they will close the book on Ruf and chalk him up as another one of Ruben Amaro Jr.’s failures. Ruf will not be back in 2017.