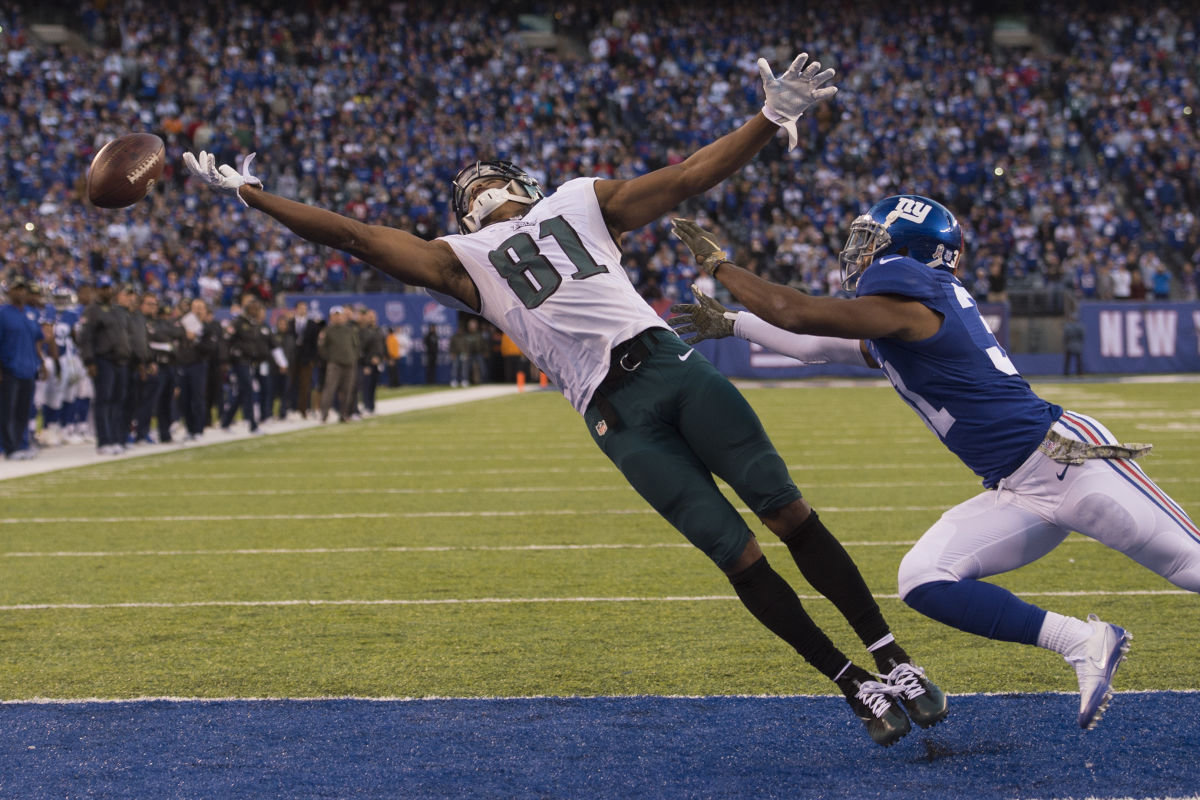 What a giant letdown.

Eli Manning threw for 257 yards and four touchdowns and the New York Giants hung on for a 28-23 win over the Eagles Sunday afternoon at MetLife Stadium.

The Eagles had been a perfect 5-for-5 on fourth down heading into the game, but were unable to convert a 4th-and-2 and 4th-and-1 in the second quarter. Philadelphia finished 1-of-4 on fourth down in this one.

You knew these two missed 4th down conversions would come back to bite the Eagles in the ass. Very frustrating! @AdrianFedkiw pic.twitter.com/F1rpz9AmvM

Not only should you take the points on the road, I also wasn’t crazy about the calls. I’m not a big fan of running the ball laterally instead of up the middle and the Eagles did it both times. And why is the diminutive Darren Sproles in there on fourth down?

Pederson’s fourth down play-calling weren’t the only frustrating decisions he made. He ran the ball on a 3rd-and-5, 3rd-and-4 and 3rd-and-3, none of which moved the chains. He called a wide receiver screen to Jordan Matthews on a 3rd-and-10 and there were several other third downs where the Eagles threw it short of the sticks.

Philadelphia finished 3-of-15 on third down.

Due to Manning’s quick drops, the Eagles struggled to generate pressure and the secondary was exposed again. Leodis McKelvin had a very rough afternoon.

Carson Wentz settled down after tossing a pair of interceptions early on, which helped the Giants race out to a 14-0 lead. He failed to set his feet and the bail sailed, something that we’ve been seeing too much of over recent weeks. The rookie finished 27-of-47 for 364 yards.

“I airmailed them,” Wentz said of the interceptions.

To give Pederson some credit, the Eagles did attempt to get the ball more down the field, tallying seven 20-plus yard receptions. Undrafted rookie Bryce Treggs, activated after Josh Huff was released from the team Thursday following his arrest, hauled in a 58-yarder among his two catches.

We’ve been begging for the deep ball all year, Wentz to Treggs for 58 yards @AdrianFedkiw pic.twitter.com/NsICV4B58w

Despite all of that, the Giants opened the door twice for the Eagles to steal the win in the fourth quarter.

Nolan Carroll wrestled the ball away from Odell Beckham at the 10:21 mark of the frame with the Eagles trailing 28-20, but the Birds wound up going three-and-out.

Great play by Carroll to wrestle it away from Beckham pic.twitter.com/dlEof5t4lJ

After Philadelphia forced New York to go three-and-out, Pederson went for it on a 4th-and-9 and Matthews picked up 25 yards on an out-route. Caleb Sturgis’ 38-yard field foal trimmed the deficit to 28-23 with 3:51 to play.

Doug goes for it on 4th and 9 and Matthews picks up 25 yards. Gutsy, gutsy call. I would’ve punted. @AdrianFedkiw pic.twitter.com/WUESYuqmuL

Then the Eagles defense came up big again, with Jordan Hicks coming up with an incredible diving interception at the Giants’ 34-yard line after Connor Barwin tipped Manning’s pass up into the air at the line of scrimmage.

Barwin with the tip, Hicks with the diving pick and an Eli face @AdrianFedkiw pic.twitter.com/j6wODVk5zI

Philadelphia, however, wasn’t able to pull it off in the end as Matthews couldn’t come down with Wentz’s toss into the back right corner of the end zone on 4th-and-10.

4th and 10 pass for Matthews falls incomplete and the Giants win. Doug left 6 points out on the field and the Eagles lose by 5. pic.twitter.com/9vfVqD1gxy

The Giants raced out to their two-touchdown lead just over five minutes into the game, but the Eagles scored the next 10 points to get right back in it. Sturgis split the uprights from 34 yards out and Ryan Mathews did a nice job of bouncing to the outside on his 8-yard touchdown scamper early in the second quarter.

Nice bounce to the outside by Mathews for the touchdown. Eagles cut deficit to 14-10 pic.twitter.com/lICZSjRBOi

New York, though, answered with a touchdown on their ensuing series when Beckham’s 1-yard score capped a 6-play, 86-yard drive for a 21-10 advantage.

Both teams found paydirt on their opening possessions of the second half. Nelson Agholor picked up 23 on a hitch route before Kenjon Barner fought his way into the end zone.

Agholor with the YAC and Barner with great effort on the 3-yd TD run @AdrianFedkiw pic.twitter.com/IDv3znZi4N