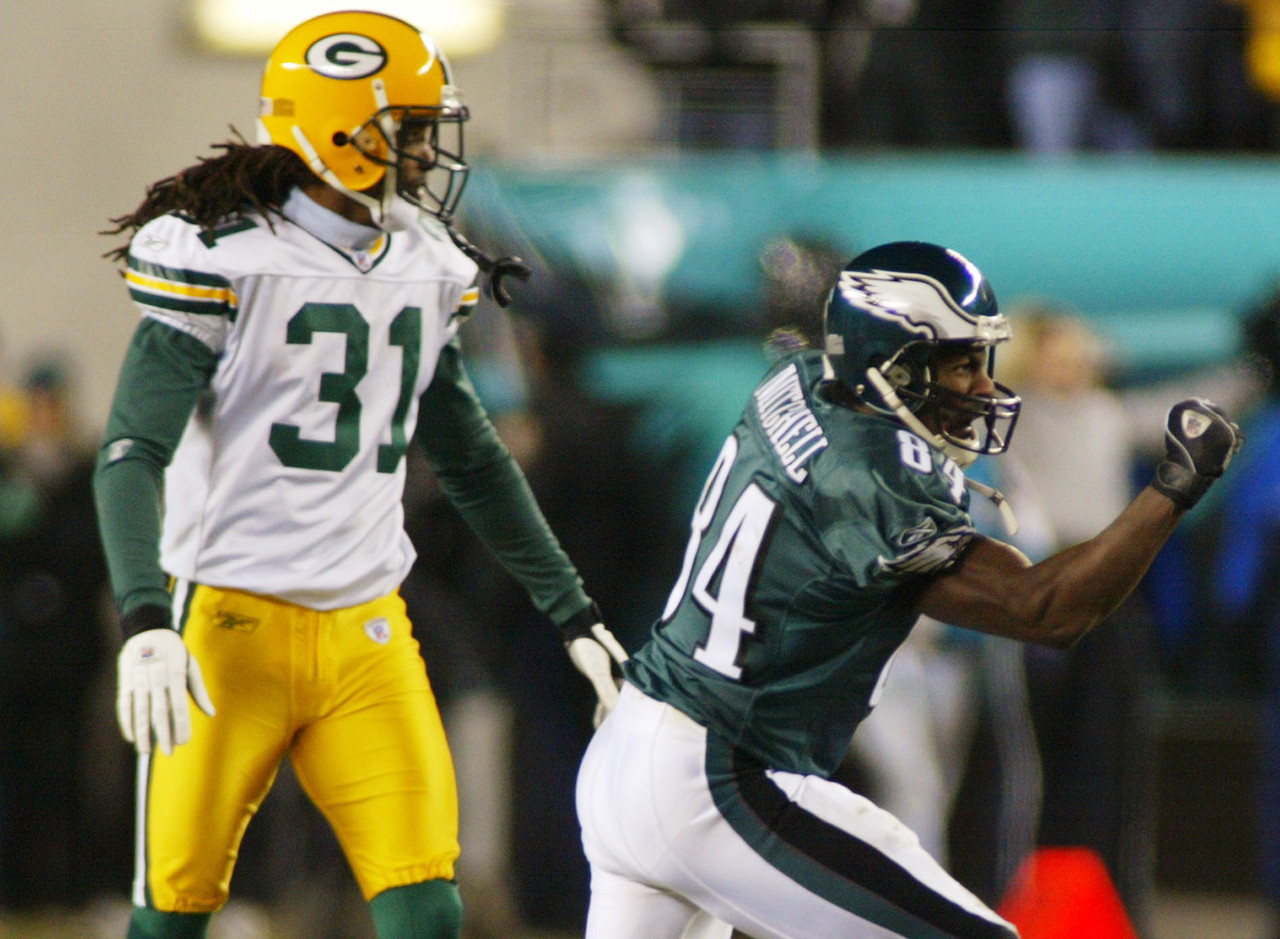 A day removed from Thanksgiving, I’m still in a thankful mood. I’d just like to take a second and thank Freddie Mitchell for his hands.

Do I need to say more?

Mitchell kept the season alive with a miraculous 28-yard reception in the fourth quarter and David Akers sent the Philadelphia Eagles to their third straight NFC Championship Game with a game-winning 31-yard field goal in overtime as the Birds beat the Green Bay Packers 20-17 in the 2003 NFC Divisional Playoffs.

Here’s Mitchell talking about that catch.

Prior to the 4th-and-26 catch, the Packers had a chance to essentially put the game away if they would’ve converted a 4th-and-1 at the Philadelphia 41-yard line with 2:30 left in regulation. The way Green Bay had been running the ball all afternoon, it seemed like the right thing to do. The Packers gained 210 yards on 37 carries, with Ahman Green leading the way with 156 yards on 25 totes. The offensive line had been dominating, but Green Bay head coach Mike Sherman instead elected to punt the ball instead. And as you’ll see, it was much to the relief of Eagles head coach Andy Reid.

Why the reluctancy? Probably because the Eagles had stopped Green shy of a touchdown on a 4th-and-goal from the 1-yard line earlier in the game.

But check out the chunks of yardage Green and Najeh Davenport had gobbled up all afternoon.

We can thank Mitchell’s hands for converting the fourth down, but we can also thank Sherman for caving in and punting the football. Then it took the Eagles only one play to get past the 40. After Josh Bidwell’s touchback, Duce Staley broke off a 22-yard run off left tackle. The 4th-and-26 conversion was needed after Bhawoh Juh sacked Donovan McNabb for a loss of 16 yards. Mitchell’s 28-yard completion put the ball in Packers territory and a subsequent encroachment penalty moved it to the 41-yard line. Mitchell then hauled in a nine-yard reception to put the Eagles in field-goal range and a 10-yard pickup by Todd Pinkston later in the drive made Akers’ kick more manageable.

With all of the momentum heading into overtime, Brian Dawkins intercepted Brett Favre on Green Bay’s first drive and returned it 35 yards to the Packers’ 34. Akers then put the finishing touches on the first playoff game at Lincoln Financial Field with his 31-yarder.

McNabb, who was sacked eight times, threw for 248 yards and two touchdowns on 21-of-39 efficiency and added 107 yards on the ground.

Pinkston caught seven passes for 95 yards and a score for the Eagles, who were without their dynamic running back Brian Westbrook after he suffered a torn tendon in his left arm in Week 17.

Philadelphia would go on to lose to the Carolina Panthers a week later, 14-3, in the NFC title game, their third consecutive defeat with a trip to the Super Bowl hanging in the balance.

Favre finished 15-of-28 for 180 yards with two touchdowns and an interception for Green Bay, which raced out to a 14-0 advantage.

The Eagles started off very sluggishly offensively, recording three-and-out on their first two possessions and and McNabb fumbled on the third play of the third series. Cornerback Mike McKenzie shot into the backfield unabated on a blitz and McNabb lost control of the ball while attempting to scramble to his left. The turnover led to a 40-yard touchdown to Robert Ferguson on the very next play to open the scoring midway through the first quarter.

The Packers carried the ball six times for 49 yards on the march, which included a 26-yard jaunt from Green. Favre finished it off when he floated another touchdown pass to Ferguson, this time along the left seam for a 14-0 Green Bay margin late in the first.

Philadelphia finally got on the scoreboard midway through the second. McNabb found Pinkston along the left sideline for a 45-yard gain before Staley scored from seven yards out on a shovel pass a play later.

McNabb singlehandedly helped the Eagles tie the score at 14-14 on their 8-play, 89-yard trek, which took place during the late stages of the third and briefly bled into the fourth. McNabb was 5-of-6 for 72 yards and added scrambles of 13 and 22 yards on the series, which he finished off by eluding several Green Bay would-be tacklers while being flushed to his right and finding Pinkston in the front right corner of the end zone.

The Packers went back in front two possessions later. Javon Walker came down with a jump ball for a 44-yard completion, which led to a Ryan Longwell 21-yard field goal and a 17-14 margin with 10:25 to go in the fourth.