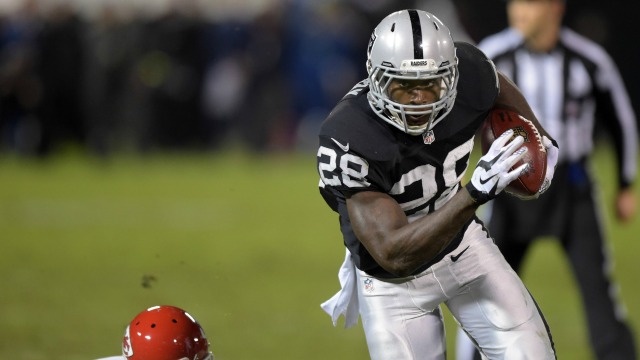 The New England Patriots got a superstar back and are now laying their claim to Lombardi. The Minnesota Vikings lost a superstar and are starting to look like basement dwellers pretty fast. Nothing is ever predictable in the NFL. Will the Cleveland Browns win a game this year? Will Gus Bradley and Chip Kelly have an NFL job next year? The questions this year continue to grow with every first down and every punt. Thankfully, we have our fantasy football teams to cheer us up. Sometimes.

We have now entered the part of the season where the risks should be at a minimum and your weekly starters should be locked in. Let’s take a look at the recap for Week 9 below to see how some of the old reliables fared and how the rest of the “big name” guys disappointed again.

Colin Kaepernick – Well, Kaepernick went from Blaine Gabbert’s water boy to a serviceable quarterback all in a few weeks. He put up some flashy numbers in an offense that’s as easy to run as a game of Candyland. Yep, Chip is that predictable. Here’s to Kaepernick as he hopes to keep landing on the peppermint. If not, there’s always Gatorade!

Latavius Murray – Murray for most of the season has been a part of a RBBC for the Raiders, but this week he was a touchdown monster. Jack Del Rio is one the toughest coaches in the NFL and Oakland’s O-Line, the best in the league, will continue to feed off each other as they bring back a smash-mouth running attack we all sorely missed. The Raiders could be this year’s biggest surprise.

Dez Bryant – Dez fooled me again. As the Cowboys stomped all over the imaginary Browns, the star receiver could only muster ONE catch. Instead, Jason Witten, who couldn’t outrun a kid in a potato sack race, looked like Usain Bolt catching everything thrown his way. Bryant has become synonymous with the consistent letdown and could eventually warrant benching for another hot hand. Owners beware.

Jarvis Landry – As Miami has found a running game, Landry has found empty hands. The normally hot handed receiver has been playing second fiddle to Jay Ajayi and his numbers are starting to show it. Last year’s short possession passes are now becoming hard-fought runs. Hope is fading fast.

–Melvin Gordon 2015 is finally born – This is the guy we drafted last year. What a reverse of the sophomore slump. One word: BEAST!

–Allen Robinson shows life – Don’t look now, but we had a Mr. Robinson sighting this weekend. Through the trials and tribulations of Blake Bortles’ elbow, the odd sight of a screwball made of pigskin crossed the goal line to its favorite receiver. Even Big Red himself had to chuckle. Maybe the best is yet to come.

–Any 49ers running back will produce – One thing about Chip Kelly is he will lean on any running back at any time. Down 34-0, let’s run the ball! Going for it on fourth and 24, let’s run a draw! Whether it’s Carlos Hyde or DuJuan Harris, the numbers will come. See the college comparison!

The Cleveland Browns are still winless and Donald Trump is president … Tony Romo will continue to run ice baths and wash towels, as long as Dak Prescott keeps winning … Greg Hardy indicted for cocaine? No way … The legend of Melvin Gordon in San Diego keeps growing and Antonio Gates is still dropping dimes … Green Bay reverted back to Week 3 again and Jordy Nelson still can’t run … Doug Pederson forgot how to set up for a field goal and continues to give away points like Whose Line Is It Anyway? Because, you know, the points don’t matter … DeMarco Murray has turned his tears into dollar signs … New England looks like they will be fitted for another ring and the Vikings are sinking faster than the Titanic. Bring on Week 10!