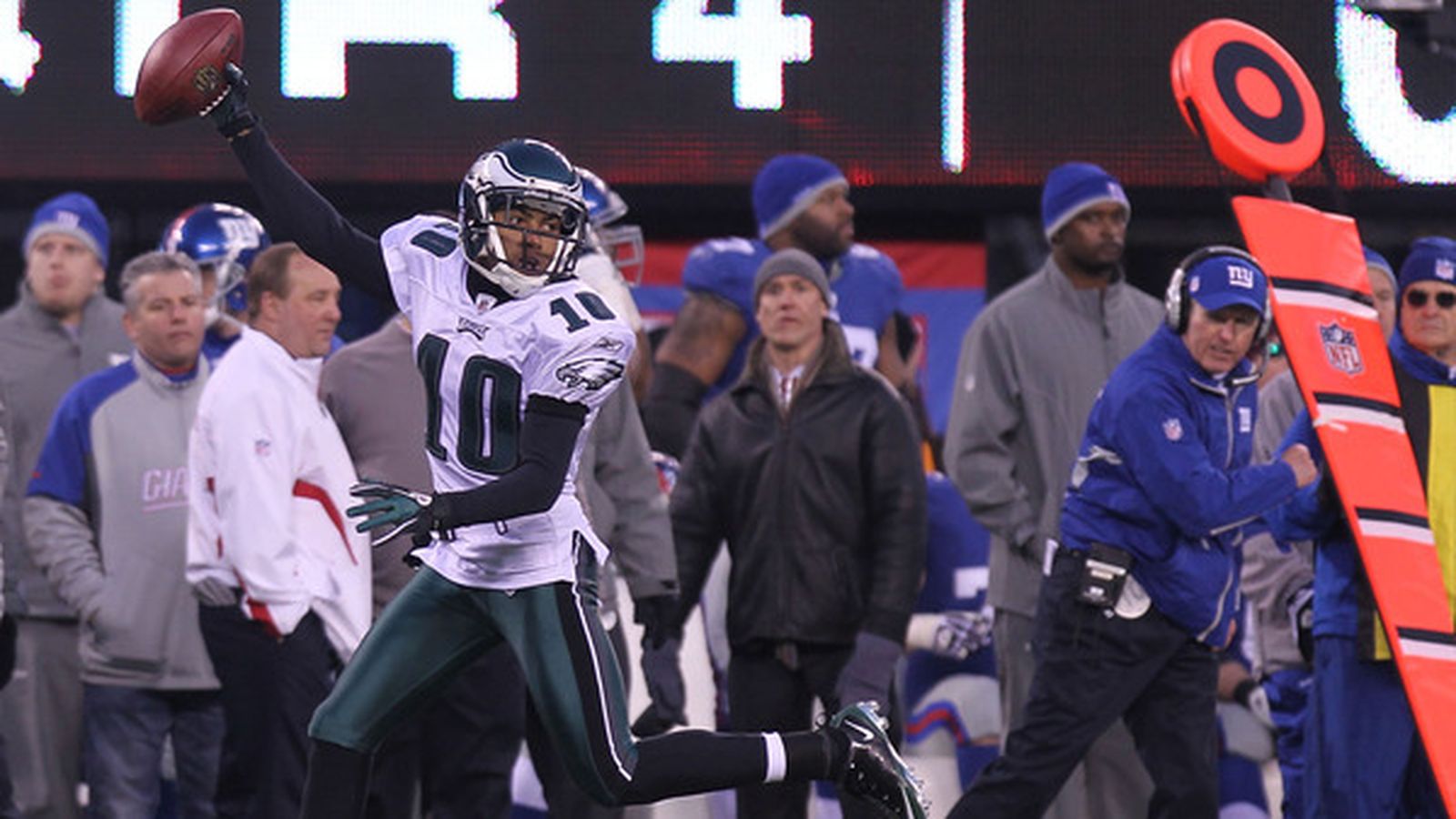 I think you guys know the rest.

DeSean Jackson’s 65-yard touchdown return on the final play lifted the Philadelphia Eagles to an improbable 38-31 win over the Giants in a key NFC East clash in Week 15 of the 2010 season.

The victory allowed Philadelphia (10-4) to sweep the season series and move a game ahead of New York in the NFC East standings with two games remaining.

The comeback began when Kenny Phillips whiffed on a tackle attempt on Brent Celek, which allowed him to rumble down the field for a 65-yard touchdown.

Riley Cooper recovered the ensuing onside kick and the Eagles were back in business. Michael Vick hit Jackson for a gain of 13 yards, took off up the middle for a 35-yard pickup and scampered in for a score four plays later to cut the gap to 31-24 with 5:32 left.

The Eagles forced a pair of incompletions and Trevor Laws sacked Eli Manning on third down before Jackson took his punt to the house. An agitated and irate Coughlin confronted his punter after the play.

Vick finished 21-of-35 for 242 yards with three touchdowns and an interception, while also gaining 130 rushing yards and a score on 10 carries. Maclin caught seven balls for 89 yards and two touchdowns.

Manning, meanwhile, was 23-of-39 for 289 yards with four touchdowns and a pick for the Giants, who lost again the following week to the Green Bay Packers and missed the postseason with a 10-6 record.

Not that the Eagles fared better. They didn’t win another game, losing to the Minnesota Vikings and Dallas Cowboys to close the regular season prior to their Wild Card loss to the Packers.

The Giants struck first during the latter stages of the opening frame, converting a trio of third downs prior to finding the end zone. Manning found Hakeem Nicks for a 22-yard completion on a 3rd-and-11, hit Mario Manningham for a gain of 10 on a 3rd-and-7 and lofted a 35-yard touchdown to Manningham on a 3rd-and-8 along the left sideline.

Quinten Mikell’s intercepted Manning when Darryl Tapp deflected a pass at the line of scrimmage and it led to a David Akers field goal for lone Philadelphia points in the first half.

New York rattled off the final 17 points of the half.

A pair of 9-yard runs from Ahmad Bradshaw moved the ball to midfield and Manning slid to his right before flipping a 15-yard completion to Nicks on a 3rd-and-12. Manningham then hauled in a deep comeback, broke a tackle from Dmitri Patterson and headed into the end zone for a 14-3 Giants margin midway through the second.

After Lawrence Tynes booted through a 25-yard field goal with 52 seconds left before the break, Jeremy Maclin fumbled on the second play of the Eagles’ ensuing series. The miscue led to an 8-yard score to Nicks.

The Eagles crossed the goal line for the first time with 4:06 to go in the third. Manningham put the ball on the turf and Philadelphia took advantage three plays later when Vick hit a wide-open Maclin for an 8-yard touchdown.

The Giants capitalized on a third Eagles turnover. DeSean Jackson fumbled when he lost control of the ball on his dive on the turf. Kevin Boss’ 8-yard score increased the New York lead to 31-10 with 8:23 remaining.