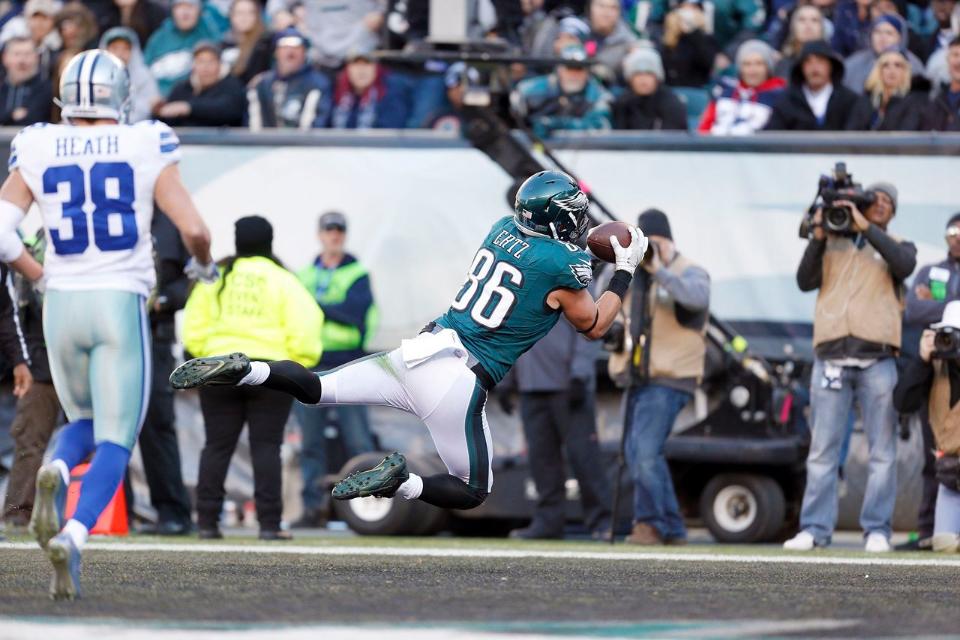 After Wentz lofted his second touchdown to Zach Ertz on Sunday afternoon, Wentz ran over to Trout and handed him the game ball before the two shook hands and Trout pounded his chest.

Fantastic diving catch in the back left corner of the end zone by Ertz for his 2nd TD and Mike Trout gets the game ball. @AdrianFedkiw pic.twitter.com/Pag29A4aHr

The regular season finale between the Philadelphia Eagles and Dallas Cowboys might’ve been meaningless, but beating Dallas never is. Ertz had 13 receptions for 139 yards as the Eagles downed the Cowboys 27-13 at Lincoln Financial Field.

Ertz had a fantastic final month of the season, hauling in 31 receptions for 364 yards over his final four games.

Zach Ertz had 13 receptions for 139 yards and 2 TDs. Finished with 31 catches for 364 yards over his last 4 games. pic.twitter.com/YVWxHBeNZw

Wentz talked about his developing rapport with his tight end.

Linebacker Jordan Hicks continues to be a Cowboy killer. He had a pair of first half interceptions to go with five tackles.

Wentz was 27-of-43 for 245 yards and two touchdowns in an up-and-down performance for the Eagles, who won their final two games to finish the year 7-9. Darren Sproles, Byron Marshall and Terrell Watson carried the load in the backfield with the injury to Ryan Mathews. The undrafted Marshall led the way with 10 carries for 42 yards.

Some solid running and cutting by Byron Marshall on this drive @AdrianFedkiw pic.twitter.com/fUi3OFiMMq

Watson, who recorded his first career touchdown, toted the rock nine times for 32 yards. If you don’t know about his incredible story, give this story a read from the Eagles’ website.

Head coach Doug Pederson is happy with the way his team fought down the stretch.

I challenged the team a couple weeks ago as far as let’s finish the season the right way, and our last month of the season has been definitely heading in the right direction. It’s great to finish strong, two division opponents, and get two wins this way. Kicking off the year the right way.

Despite the 7-9 mark, Pederson feels like the team is close to competing.

We’re very close. We’re very close. And when you talk to coaches around the league, they see it. They see it on the outside. Even though the win-loss and everything is not in our favor, I think we lost six games this year by a touchdown or less, and we’ve just got to learn to finish those games. We’ve got to learn to make more plays and finish those games, but I think we’re extremely close, extremely close to being a team that can compete each year for not only the NFC East but for the postseason.

According to the box score, defensive end Brandon Graham posted just two tackles, but he was making mincemeat of right tackle Doug Free all afternoon to get pressure on the quarterbacks.

Dallas had already locked up the NFC East and homefield advantage throughout the NFC playoffs coming in. Running back Ezekiel Elliott never played and Dak Prescott, Tony Romo and Mark Sanchez all saw playing time at quarterback for the Cowboys. Here was the list of inactives.

Prescott played two series, Romo led the Cowboys down the field for a touchdown on his only possession and Sanchez played the rest of the way. Sanchez was 9-of-17 for 85 yards and a pair of interceptions.

Tony Romo is in pic.twitter.com/zRHfb5SzCo

The Cowboys led 13-10 after Dan Bailey booted through a 23-yard field goal at the 9:18 mark of the third quarter. The Eagles scored the final 17 points of the game.

Ertz’s diving touchdown in the back left corner of the end zone capped a 10-play, 89-yard march toward the latter stages of the third and Marshall carried the ball four times for 22 yards on a key field goal drive to put the Eagles up 20-13 with 2:18 to go. Philadelphia then unleashed its fury on Sanchez on Dallas’ ensuing touch and Steven Means blocked a punt before Watson put a bow on the proceedings with his score.

Means easily sliced through the middle of the line on his punt block.

Means slices through the middle and blocks the punt @AdrianFedkiw pic.twitter.com/3QI2Ytjf3i

Earlier, with the game tied at 3-3, Romo completed 3-of-4 tosses during his only drive and hit Terrance Williams for a 3-yard touchdown.

Romo to Williams for the TD and a 10-3 Dallas lead pic.twitter.com/ptdmcvbqdl

Wentz flipped a 6-yard score to Ertz with seven ticks left in the half to knot the score at 10-10 heading into the break.