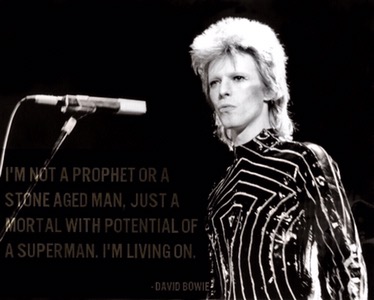 Whether it’s his music, his performance, or his unforgettable words, the legacy of David Bowie is one of greatness. The English singer, writer and actor began his professional music career in the 1960s. Through the years he reinvented his image, revolutionized musical genres, and in the process, became one of the world’s best-selling musical acts of all time. With those periods of success and rejuvenation, also came periods of contemplation, reflection, and introspection.  Today we celebrate the birth of this entertainment icon, and highlight a few moments that the musical titan spoke on the progression of his life, artistry, love, and more.

The world has seen David Bowie adorn many costumes and shuffle his appearance many times. Bowes’s face was usually the noticeable detail on his album covers and materials. If he had a bold look or was dressed simply, one of his distinguished features was his eyes.  Here Bowie tells about the youthful scrum over a woman that led to his memorable feature:

The Meaning of Ziggy Stardust

His hair was a striking reddish-brown, his outfits were elaborate, and cultivated a cult-like following. His name was Ziggy Stardust. Onstage with the Spiders from Mars, Bowie combined strands of rock and light futuristic sounds to create a version of glam rock. Bowie amassed wide success and stardom utilizing his larger than life alter ego. Here he talks about Ziggy:

David Bowie toured in the United States for many years and ultimately moved there for a short time in the mid 70s. Bowie recored several songs in Philadelphia which spawned the album Young Americans. The work included many singles including the hit “Fame”. Later Bowie desired to tour back in the UK.  He faced a return to a home country in musical change:

Bowie maintained his massive success and his music continued to blossom and broaden. He appeared on several television broadcasts and award shows, including being one of the first acts of his genre to perform on the variety show Soul Train. Fans saw several shades of the chameleon like and ever changing  artist. He was thoughtful, thought-provoking, and often humorous:

On Being an Artist

David Bowie often stated he ran from the term of being a musician. He believed he didn’t play very well. Often, he found it remarkable when the random sounds in his head be came tangible and beautiful works. He was extremely creative and gifted. Here he remarks on the instability and process of what being and artist entails:

The creative genius accomplished so many feats in music in film. His years of acclaim  and stardom gave him many insights when it comes to the continuity of an artist’s work and its depth. Bowie often thought of the how popularity and fame of some artists influenced their work and the the future of music. Here he speaks on “playing to the crowd”:

David Bowie married Iman in 1992. The pair was often private about the details of their romance but their enduring love for one other was a constant anchor for Bowie throughout the latter portions of his life. He was an endearing father to two children. Here he speaks on marrying Iman and how fatherhood changed him:

After all his achievements, Bowie exuded such a glorious appreciation for the great things he experienced along the way. He was righteously content with the love in his life, his family, and the fantastic journey that led him to share his artistry with the world.

David Bowie is missed daily. His passion for living, his creative spirit, and unflinching vision will be remembered forever. It’s on this day that we don’t just reflect on the loss of a man but we celebrate all the wondrous things he gave us.