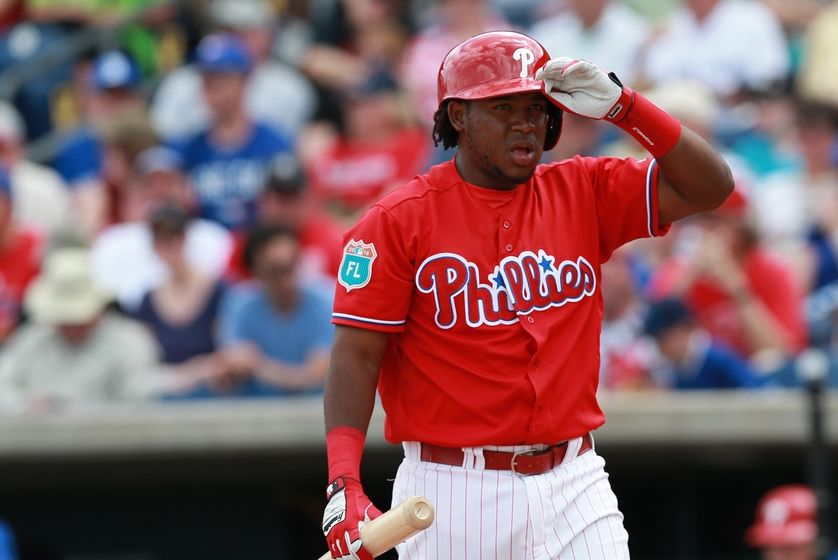 Looking ahead to the fantasy baseball season, I decided to take a look at the Philadelphia Phillies roster and breakdown which players could serve as useful picks in the upcoming drafts. Last week it was Tommy Joseph, and this week, I’ll turn my attention towards Maikel Franco. Could he be a consistent source of power at the hot corner in 2017?

The Phillies haven’t had consistency at the hot corner since the days of Scott Rolen. Rolen actually had the chance at being “The Next Mike Schmidt” in Philly, but instead stomped his feet like a whiny two-year old and ran himself out of town. Schmidt is the last power hitter at third base The City of Brotherly Love has seen in over 30+ years. We have gone through names like Greg Dobbs, Pedro Feliz, Dave Hollins, and Charlie Hayes – all of which had their moments – but fall way short in comparison to the potential of Franco.

In 2015, Franco burst onto the scene and could have started his own recording company with the constant sampling of the phrase “Rookie of the Year” being heard all over Major League Baseball during every highlight show on radio and television. Even Chris Berman needed to add an extra chord to his infamous home run bellow to satisfy Franco’s freakish power. The third baseman smacked 14 home runs in only 80 games that season, before suffering a hand injury that forced him to be shut down for the remainder of the season, his only ambition to be ready for the 2016 season.

The off-season hype for the future All-Star on a team that needed a boost was more than one could have imagined. This was a 24-year-old phenom who, up to that point, wasn’t even thought of to be in the rebuilding mix. One of the most impressive things in his rookie campaign was his plate discipline for a power hitter. He hit an impressive .280 while sticking to a strikeout rate of 15.5%. This is very impressive when you look at the third basemen who are ranked around him, particularly Miguel Sano of the Twins who topped off at 36% in 2016. This is a credit to Franco, but after a down year of 16.8%, it is something that he needs to tighten up.

When analyzing the approach to the plate and his upswing to produce an unprecedented source of power, I have come to my own conclusion that we could be looking at our own version of José Bautista. Early in his career, Bautista also showed flashes until he hit that power switch and everything came together at once. With every fearless leg kick and swing, Franco gives me hope that he could be our next “40 Homer Man,” making the left field pricing level the hottest tier at Citizens Bank Park.

Looking into the stats below, you can see some similarities for each players’ first two productive years. [Courtesy of Baseball Reference]

Interestingly enough, during a down year in 2016, Franco still managed to pop 25 home runs and give the fans, along with the fantasy owners, a preview of his growth. Franco is a young power hitter with plenty of room to improve and was the product of a supporting cast that just wasn’t viable. In his sophomore year, he tried to do it all and couldn’t make the adjustments needed to outsmart the pitchers that he was torching a year prior. The amount of weight on this youngster’s shoulders last year cannot be underestimated and his stride is in the early stages of growth. He is an integral part of the Phillies’ growth, and, just like Bautist, could be warming up for a grand finale.

It has been reported that Franco jumpstarted a new workout regimen this winter and is looking in phenomenal shape. Assuming this is the case, is a rebound year in 2017 that far-fetched?

The Phillies, while still mired in mediocrity at best, added some fuel to their lineup this year. With a surging Tommy Joseph and some left-handed power in Michael Saunders, the protection for Franco is already in place. In 2016, he was drafted as high as the fourth or fifth best third Baseman in many drafts, but this year, he will certainly drop. Nabbing him in the middle teen rounds is the perfect place for a guy who has 35+ home run potential and the prospect of being a team leader. I know we talked about the Phillies making a run at Bautista in the offseason, but what if we were lucky enough to have the same player in our own backyard? If he pans out to be another Joey Bats, the Phillies will be able to sell their advice on the open market to the highest bidder!