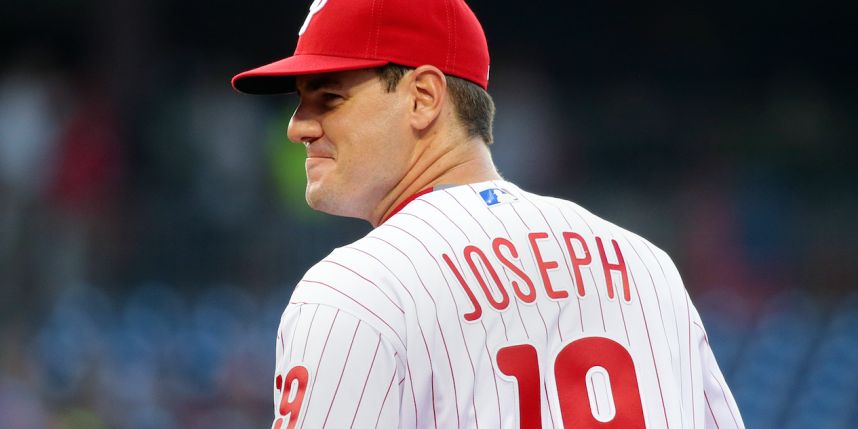 As we get ready for the fantasy baseball season, we have to look at values all across the board and wonder who is a player we can steal. In a shallow pool of talent at a position like second base, finding a gem may not be too easy. Typically, some of the deeper positions are known to be at third base, outfield and first base. Since this area is full of talent, letting the higher players come off the board and waiting for the sleepers could be the right route to go. Speaking of sleepers, one of the more interesting ones could be sitting in our own backyard.

It was five years ago that the Phillies were in the midst of cleaning house and decided to ship Hunter Pence to the San Francisco Giants in exchange for minor league catcher Tommy Joseph, major league outfielder Nate Schierholtz, and class-A right-handed pitcher Seth Rosin. Joseph was the key to this deal as the young catcher the Phillies sorely needed at the time. Below is the scouting report that was made public at that time, courtesy of SB Nation prospect guru, John Sickels.

Grade B-: Borderline B: I like the way he improved his defense, also has standout power, hit 22 homers in High-A at age 19/20. Strike zone judgment remains poor and precludes higher grade, but he projects as a regular catcher if he can improve his approach.

And, in his mid-season evaluation of his pre-season prospects, Sickels wrote:

Joseph started his minor league career with the Phillies under an unforeseen black cloud. While trying to prove himself as an important part of the future, the injury bug struck and concussions ended his days as a catcher. After dealing with multiple head injuries, it was a given that his catcher days were behind him and first base or the outfield became a more practical home.

For Joseph, 2016 started off fantastic as he crushed Triple-A pitching, hitting .347 with 11 runs, six home runs, 17 RBIs and a .981 OPS in 95 at-bats. It wasn’t long before he was called up and the platoon with Ryan Howard was put in full motion. Even though he eventually landed the starting gig, his plate appearances suffered and left him without an opportunity to hit his full potential – literally.

In the majors, he had 315 at-bats and hit .257 with 47 runs, 21 home runs, 47 RBIs and a .813 OPS. Joseph has remarkable power, but only ranked 29th in ESPN’s end of 2016 rankings among first basemen. Yet, with 21 home runs in such a small sample size, I truly feel the 30 home run mark in 2017 is certainly not out of the question. The Phillies’ first baseman showed good contact and is going to be a bargain in 2017 fantasy baseball drafts. When you look at first basemen around the game, many will be drafted in the high to mid rounds of a standard draft leaving Joseph as a sleeper in the later rounds.

While the Phillies are rebuilding, there are some interesting fantasy players that need to be on your radar and I will do my best to profile some of them in the weeks ahead. Joseph is one of my favorites and should offer ultimate value in an offense that is revamped and a park that is very hitter friendly.

Think about this: in preliminary drafts, Joseph is being drafted as late as Round 18. This offers the potential to snag a 30+ home run player in the latter part of a draft when people are drafting prospects still in Triple A. Be cautious, but keep his name in your queue and get ready to hit that draft button before someone else steals him. Could he be the second coming of Pat Burrell?