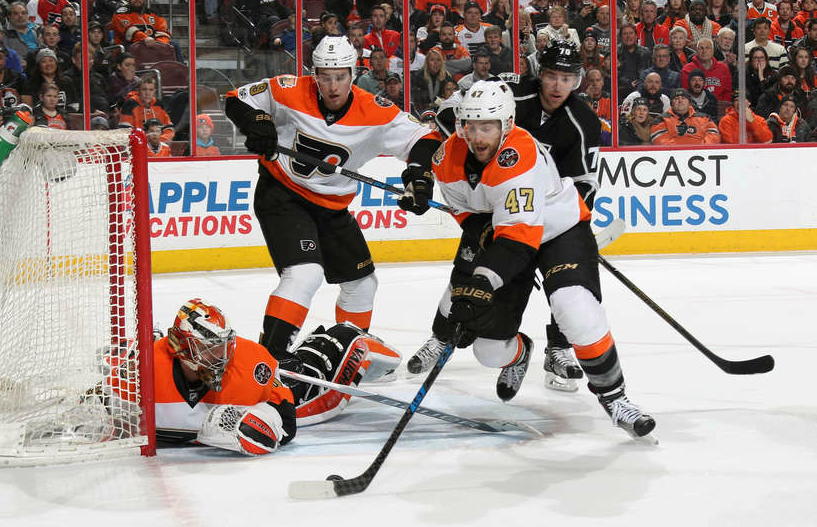 The Philadelphia Flyers, coming off a strong win against the Montreal Canadiens Thursday night, looked to continue their strong play at home this season in a Saturday matinee against the Los Angeles Kings.

Saturday’s game was the second of a five-game homestand over the next week.

Flyers head coach, Dave Hakstol, decided to continue with the lineup that got them a win and scratched Travis Konecny and Shayne Gostisbehere for the second consecutive game, along with starting Michal Neuvirth in net for the second game in a row. This would hopefully be a chance for the two young guns in Konecny and Ghost to see the game from afar and change some of the defensive mistakes they’ve been making so far this year,

The Flyers would hope to recreate their 4-2 win against the Kings back in October, but they faced Peter Budaj who has done an excellent job in the absence of an injured Jonathan Quick.

The Flyers should somehow introduce legislature in order to not allow ex-players into the Wells Fargo Center, because it always seems to end up biting them. This game would be a defensive game, which is always expected from the Kings, but not from the Flyers.

Both teams would squander two power play chances each during regulation but Jeff Carter would ultimately score the game winning goal 2:35 into the overtime period to give the Kings a 1-0 win. Both goalies played phenomenal games but eventually one of them had to falter.

The first period turned into a goalie battle in which neither team was able to put a puck into the net. Both Neuvirth and Budaj shut down great chances from both teams.

The only power play of the period went to the Kings as Claude Giroux took a tripping penalty 11:20 into the first period but the Flyers were able to successfully kill the penalty and the Kings never got a chance to set up.

The first half of the period was controlled by the Kings as they spent most of the first 10 minutes in the Flyers zone but after the Flyers killed the penalty they gained some momentum and were able to get some great chances of their own and end the period ahead 9-8 in shots.

The Flyers would look to carry that momentum into the second period to see if they could break the 0-0 tie.

The second period would bring more of the same as both goalies would continue their clean sheets by the end of the period. However, both teams had great chances as Jeff Carter hit the crossbar and then right after that at the other end Sean Couturier hit the post on a breakaway.

There were two more penalties in the second period, one by each team. Dustin Brown took a slashing penalty which led to a Flyers power play, but on a bad change, the Flyers took a too many men bench minor, which abbreviated the odd man chance.

Neuvirth was able to make an incredible save on Dustin Brown after a horrendous turnover by Jake Voracek. Neuvirth sprawled out to make a glove save on the goal line to keep the game tied and at the same time put himself in the talk for the “Save of the Year” candidate.

Both teams had some great chances in the second period and someone would have to break this defensive battle going into the third.

The game continued to be a defensive battle as there would only be one penalty on Brayden McNabb which did not result in a Flyers power play goal. Unfortunately, the Orange and Black were unable to capitalize on their chances.

Neuvirth made another phenomenal glove save to keep the game tied at 0-0, and it would stay that way as regulation came to an end.

It was evident that without Gostisbehere in the lineup, the first power play unit for the Flyers is out of sync.

Overtime ended 2:35 into the extra frame as Jeff Carter would tap in a goal past Neuvirth, from a ridiculous angle, for the game-winner.

Neuvirth was able to keep his team in the game through 60-plus minutes but they could not get him a single goal. Missing offensively-minded players such as Gostisbehere, Konecny, and Michael Del Zotto seemed to hurt the Flyers as they were not able to muster much offense save for a breakaway chance by Couturier.

The Flyers have a quick turnaround on Monday against the St. Louis Blues, continuing their homestand in which they now have a 1-0-1 record.

I would not be surprised to see the young guys back in the lineup as the Flyers need some fire power up front if they want to continue to compete for a playoff position.