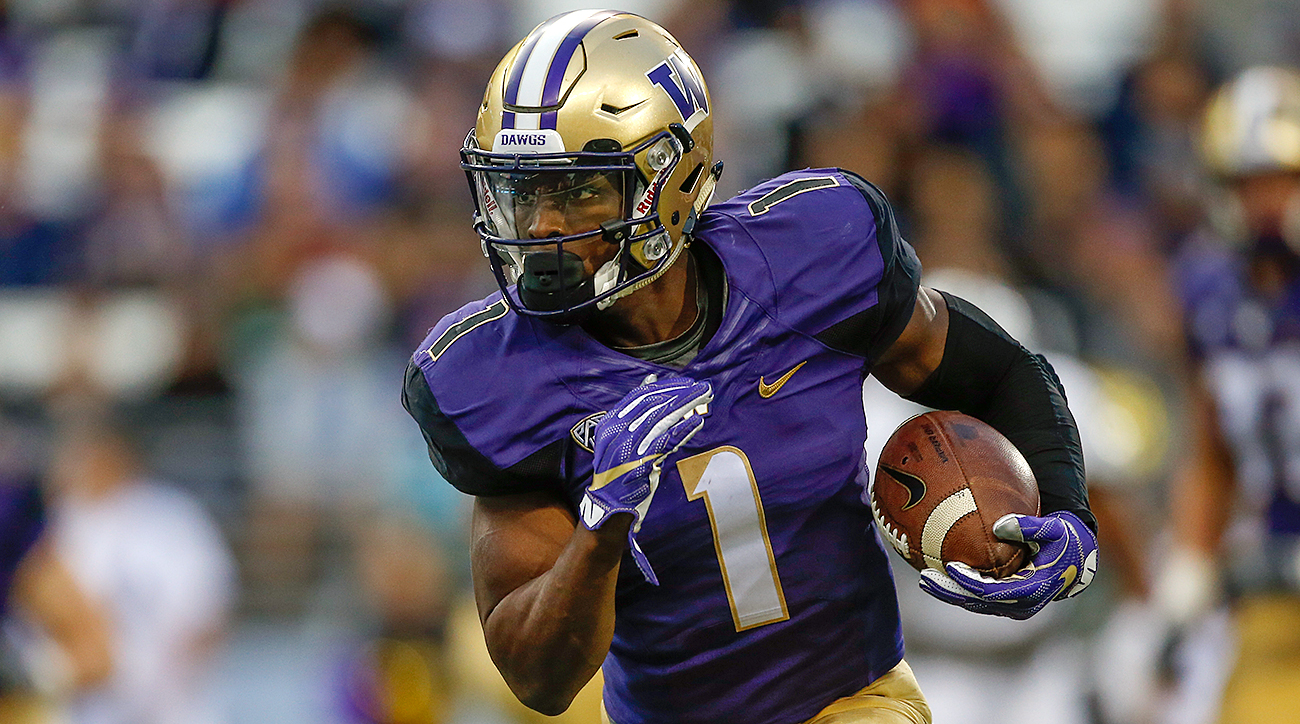 That lightning-fast 40 time at the NFL Scouting Combine broke Chris Johnson’s record and most likely solidified John Ross’ status as a top-20 draft pick, but will that speed translate to the next level? It did for Johnson, the previous record holder that ran a 4.24 40, but not so much for guys like Dri Archer, Darrius Heyward-Bey and Yamon Figures.

The Washington standout caught 81 passes for 1,150 yards and 17 touchdowns in 2016. He played in the slot and also split out outside, while also running the full assortment of the route tree. The Huskies used his blazing speed by vertically stretching the field with fades and post patterns and by immediately putting the ball in his hands with screens and reverses.

Let’s check out the tape …

Possessing blistering speed helps with more than just running vertical patterns, it also makes it easier to complete shorter routes because cornerbacks will play so far off of Ross due to his ability to stretch a defense.

Ross tracks the ball really well in the air when making spectacular over-the-shoulder catches. Due to his burners, he’s underthrown a lot and adjusted to those tosses well.

Ross is very elusive with the ball in his hands using that exceptional quickness. He drops his hips suddenly following a reception to stop on a dime and change direction. What he does in tight spaces is absurd.

At 5’11, 188 pounds, Ross is far from Hercules, but cornerbacks struggle to jam him at the line of scrimmage because of his phenomenal initial quickness. What he did to USC’s Adoree Jackson earlier this season was flat out cruel! It’s the first clip, ankles broken! He also uses that quickness to accelerate out of his breaks, especially on the out-routes.

I talked about Ross’ ball-tracking prowess, but when a pass gets underthrown, he’s not going to go up for a contested catch and win a jump-ball situation. He waits for the over-the-shoulder snag instead.

Ross is not a consistent hands catcher and lets the ball come into his body far too often. He also drops the football. His hands are only 8 3/4″, which is in the bottom 10 percent of all the wide receiver prospects.

Ross does have an injury history. He tore the ACL in his left knee prior to the 2015 season and missed the entire year. He’s also endured a pair of meniscus tears and tore his labrum in 2016. People immediately bring up his size as a reason why. His diminutive stature also doesn’t serve him well as a blocker.

While a lot of people like to make the Brandin Cooks comparison with Ross, I’m going to go with John Brown instead. Brown, like Ross, tracks the deep ball well and uses his quickness to accelerate effectively in and out of breaks. When it comes to funnest players to watch in this draft, Ross might be No. 1. Unlike a lot of the pure speed players that can’t run much more than a go-route, Ross is versatile and can run everything. He can also switch gears. The concern and what could turn Ross into a bust is the injury history.

But if he can stay on the field, Ross should be a very productive pro.

As for a potential fit in Philadelphia, Ross would be the perfect complement to Alshon Jeffery. Jeffery is a physical receiver that is going to high-point the football and be physical, while Ross is the opposite and uses his speed to beat corners. At pick No. 14, however, I believe there will be better players on the board.