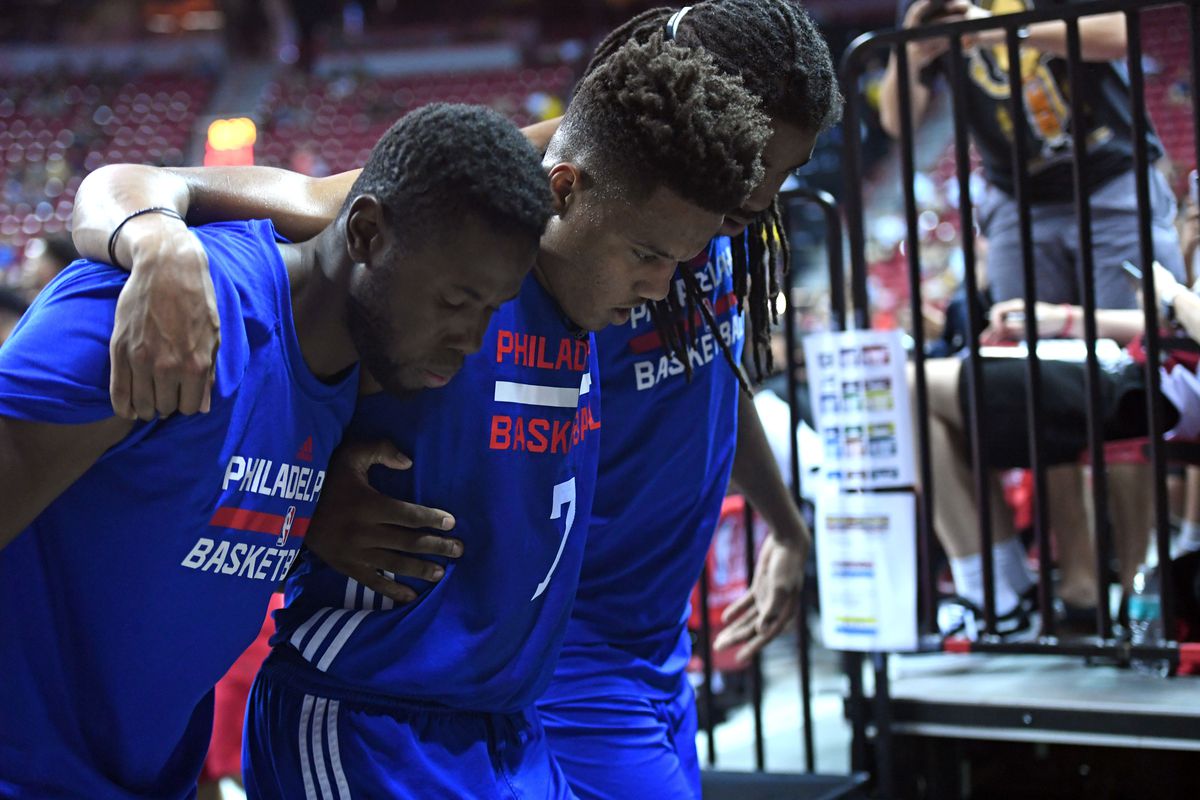 I’m in the bathroom at work shortly after midnight last Saturday into Sunday morning, just waking up from a nap on the lobby couch. I’m brushing my teeth and all of a sudden, a colleague walks in and says, “I’m not worried about Markelle Fultz.”

I think to myself, “Well no kidding, neither am I. The kid should be great.”

But then I say out loud, “What happened?” I slept through the 76ers-Warriors summer league game because of the late start time.

I’m told Fultz sprained his ankle and needed a wheel chair to help him to the locker room. Instantly without knowing the full details I go, “Well, he’s done for the season.”

It’s not hard to think that way with the Sixers considering their recent history of injuries to top picks. And while hokey, it’s not farfetched to believer they’re cursed for repeated “tanking” and lack of honesty.

The Fultz situation is clearly unfortunate and a witch doctor may be in order for this unlucky franchise. However, it’s not make or break on a season that should include the debut of Ben Simmons, reemergence of Joel Embiid and continued steadiness of Dario Saric.

Not to mention, the Sixers made solid off season additions in J.J. Redick and Amir Johnson, not to mention Richaun Holmes, T.J. McConnell, Robert Covington and Nik Stauskas should be another year better.

Basically, Fultz or no Fultz, the Sixers should make the playoffs.

But looking at the greater scheme of things and going beyond the basketball court itself, the Fultz injury will be a perfect indicator as to whether or not the Sixers changed their ways in terms of transparency.

The team says the sprain ankle will prevent Fultz from doing basketball activities one to two weeks. In that case, Fultz better be running up and down a floor by next weekend. He was also seen by CSN Philly’s Jessica Camerato taking shots during shootaround Friday. That’s a great sign.

If he doesn’t miss any of the season, it’s great first step for Bryan Colangelo, the medical team and the organization to show they can be trusted with information. It’ll prove the Sixers are truly no longer a joke and it’s time to take their word seriously.

It’ll be impossible not to “Trust The Process” anymore.

-The Sixers aren’t perfect, no matter how transparent they can show they are with the Fultz injury. The three tiered fan membership program, including a season ticket waiting list, is egregious. How can a franchise that has 75 wins the last four seasons charge non-refundable money to be on a waiting list for season tickets? It’s remarkable a team with that little success is selling out season tickets, and that’s more a testament to the fan base and not the organization. There are so many ways to purchase single game tickets today, regular season or playoffs, you shouldn’t feel the need to be in a special club. If the team wins, the likelihood of advancing off the list is small and if they lose, thus resulting in less season ticket packages, will you want them anyway?

-Carson Wentz is proving himself to be more of a leader every single day. From his workouts with teammates in North Dakota, to his new foundation and his statement on WIP that the Eagles have the talent to win the NFC East is a great sign for this Eagles season. They’re about to take over the town with training camp. There’s no reason you shouldn’t be really excited.

-Would you give up on the prospects of Dylan Cozens, Nick Williams, Roman Quinn, Mickey Moniak, Adam Hasely, Odubel Herrera or Aaron Altherr? Would you be willing to absorb the contracts of Christian Yellich and Giancarlo Stanton from the Marlins for nearly $340 million dollars, as Ken Rosenthal presented it as on Facebook? I would not. Yellich and Stanton are proven major leaguers who sometimes play at All-Star levels. But, I’m not blocking any outfielder who’s getting groomed in the Phils minor league system for players under those contracts. Yellich is intriguing. Stanton is less. I’d rather bank on a “Bash Brother” and other promising players in the Phils farm system.