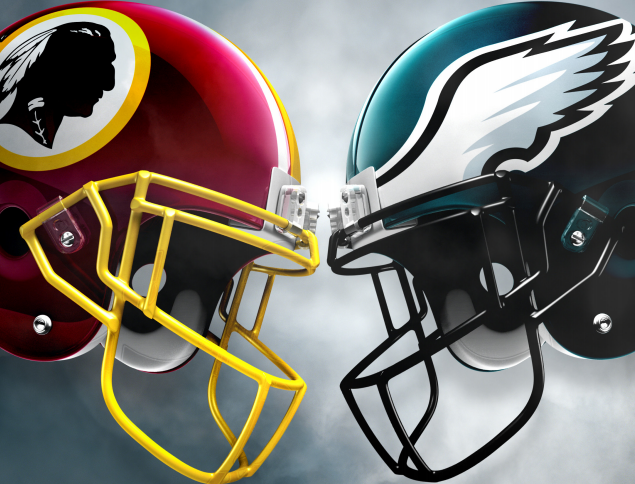 This week, the Birds will fly into Monday Night Football and host the Washington Redskins for another NFC East matchup. Since the Eagles defeated the Redskins in Week 1, they have been involved in some very tight games. They showed they can overcome adversity, mostly on the road. This is the first of a three-game home stretch to where the Birds can really separate themselves from the pack.

But Washington has something to say about that, and their fans are a bit puffy-chested out there about this week’s game. I guess they have to be.

All that said, this is gonna be a good one.

RELATED: Check out our predictions for last week’s Eagles vs. Panthers game. How’d we do?

For the last few weeks I said “If we get past Carolina, Washington is dead.” Well, we won last week and my stance has not changed. It’s Monday Night Football. We’re at home, against a division rival, and we’re better. Washington may be limping into this game down their starting two corners. Wentz and the boys roll.

It will be a typical, old fashioned NFC East slugfest, as these matchups usually are. Monday will feature two ‘R’ words. The Birds will be rested, but rusty. It’ll show early on after not playing for 11 days while having everyone in the world say how good you are. Fact is, the Eagles are good, yet the Redskins are improved. In the end, Carson Wentz will pull out the victory and the defense will force a big fourth quarter turnover. Helps to have the home crowd behind you after a long layoff. But then again, Birds fans seem to be everywhere these days. They’re just as impressive as their football team.

It will be 11 days since the Eagles stepped on the field for their first true test of supremacy and now they gear up for Round 2. This season has been nothing short of remarkable when you take into consideration several different contributions from several different positions. It really is the “Next Guy Up” policy, something we haven’t seen work since Big Red. However, we aren’t even having this conversation if it wasn’t for Ginger Jesus himself, Carson Wentz.

This team will only take them as far as the Chosen One lets them. With every missed assignment, blown screen, and head-scratching play call, Wentz just improvises like the great ones always do. He will be tested again with a long week off and a Redskins team who are better than their 3-2 record states. I was on record as saying this was the one team I was worried about and now it could be a reality. The receivers are finally starting to hit their stride and Chris Thompson is an Eagles killer.

With the long layoff and theory that the Eagles have to lose a game here and there, I feel this could be the let down we’ll talk about all next week. As much as I believe in my prediction, I sure hope I am wrong!

This is a recipe for success. The Eagles have a few extra days to rest and prepare for the Redskins in a prime time matchup. The Linc will be rockin‘ come Monday night.

I predict more of what worked in the first matchup and then some. Look for the run game to be dominant and Wentz to keep working his magic downfield. The Redskins are probably going to be missing Breeland, Norman, and Jonathan Allen.

Lane Johnson is returning for the Eagles so the ‘Skins best pass rusher could be stymied all game.

Zach Ertz will catch his first touchdown against the Redskins and the Birds will walk away victorious with their talons clinched around the throats of the NFC East. Birds by a touchdown.

I’m really curious how this Eagles team comes out on Monday night because the narrative has changed, they are no longer seen as an underdog but the favorite to win the NFC and Carson Wentz is the favorite to win MVP. It’s 11 days between games and the Birds have certainly generated a lot of buzz lately. I don’t see a letdown, however, because this is a game the Eagles have to win so I don’t think they take the Redskins lightly. The Eagles will win this game because, on paper, Washington has too many injuries on defense to keep pace with their explosive offense. I think Cousins will have a big game for the ‘Skins, but Wentz will out-duel him and the Birds win a shootout.

I still think the Redskins are a good team – but there are maaaaaany people in the Washington DC area that are touting their team a little too much. They like to talk about schedules [they basically play the same one], and their little five-game winning streak against the Birds has them puffing their chests out even more now than they were before Week 1’s match. You know, when the Eagles beat them, 30-17.

I have a more comfortable feeling heading into this Monday night matchup. Not because it’s at home – we all know that home field advantage hasn’t meant much for this team really since The Linc opened. But this year just seems different. It feels different. I actually think the Eagles win here, and the game isn’t really in doubt. Maybe Washington scores a late touchdown, or even two to try and close the gap, but the Eagles win Monday night pretty handily.

This game is so important. Win this game and the NFC East is a wrap! A lot of people seem to forget how Week 1 went down, but I think it’s more of the same. Eagles roll on offense try to make the ‘Skins keep up. Eagles win a close one.