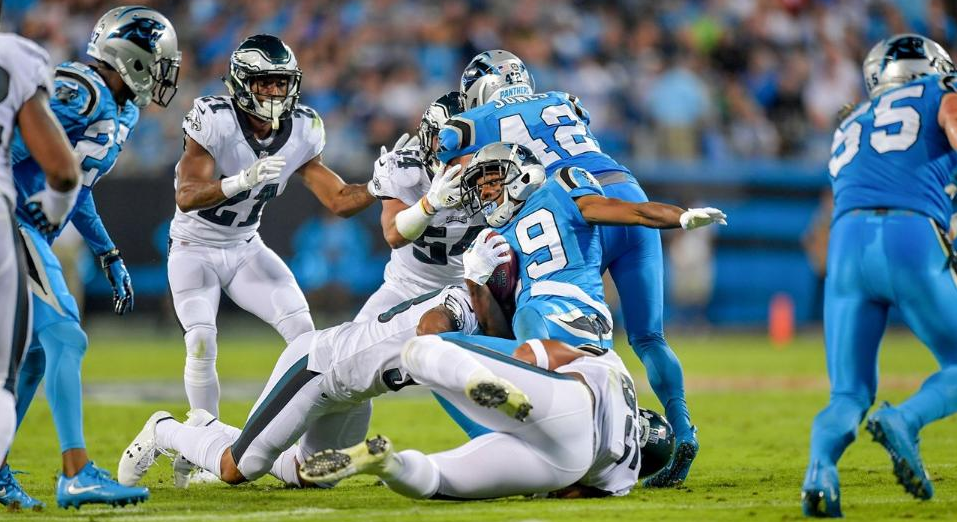 The Eagles traveled to Carolina to take on the 4-1 Panthers on a short week and came out the proud owner of a 5-1 record. This win did not come easy, it was downright ugly at times, but at the end of the day a win is a win.

The Eagles solidified themselves as the top dog of the NFC East and a legitimate contender in the NFC. That said: let’s dive right into my ten takeaways.

After being on the receiving end of an illegal formation call Doug Pederson could have elected to take the penalty on the kickoff. Instead he took the ball at the one yard line and went for two. This gave the Eagles a 5 point lead.

I think it’s great that Doug has the guts to do things like that. I’d rather my coach be too risky than play it safe too much.

2. This defense is damn good.

Jim Schwartz’s unit is crushing it. Three interceptions (should have been at least 4) defensive line was getting pressure all night long, and they only allowed 80 rushing yards.

Nigel Bradham specifically had a great game. He was flying around the field tackling, breaking up passes, and preventing the Panthers from making plays.

This team … Bradham with the deflection on 3rd down and pass falls short on 4th. Game, Eagles win 28-23!! pic.twitter.com/xJRztmP7yn

Jordan Hicks didn’t play at all in the second half, he sat out with an ankle injury. At one point Nigel Bradham (the GOAT) was sidelined with a shoulder injury. Brandon Graham took some time off as well with a shoulder injury of his own. Finally, special teams aces Chris Maragos and Mack Hollins were injured covering punts. Call it a short week, call it what you will but the birds can’t afford to keep losing players at this rate. Not to mention they are down Lane Johnson, Wendell Smallwood, and Ronald Darby.

Anyone with two eyes could see that the referees were not on our side tonight. Pete Morelli and his crew were incredibly inconsistent. There were some ticky-tack calls that were made and some obvious penalties that were missed. I tend to not be a “blame the refs” guy, but tonight was almost insufferable.

Take for instance this clip:

Blount just got flagged for pancaking a guy, this is football!! pic.twitter.com/ByDxeWQvju

LeGarrette Blount got a 15 yard penalty for a pancake block. A few plays later Blount got thrown to the ground well after the whistle with no unsportsmanlike conduct on the Panthers.

On this play Alshon Jeffery is held up and interfered with when he goes to catch the ball, no flag. I get wanting to let them play, but the Panthers had one penalty for 1 yard. No one plays a game that clean. No one.

I said it. He’s doing elite quarterback things. He just took the Eagles into Carolina, on a short week, threw three touchdowns and no interceptions, and walked out with a 5-1 record. He will be one of the best quarterbacks in the league sooner than later and anyone who disagrees with that is a hater. Looking at you, Skip Bayless and Cian Fahey. Carson Wentz is the real deal Holyfield.

Zach Ertz also (single-handedly) killed the drive after the Mills interception. He got called on a false start to move the offense back five yards, then whiffed on a block to let the running back get blown up in the back field.

At this point you have to live and die by Zach Ertz. This is a risk I’m very willing to take.

Well, to be fair no one looks good at right tackle except Lane Johnson. However, Big V is not a good tackle (yet). He let up the strip sack on the first drive. He looks outmatched and is a liability on the right side of the line. It’s safe to say the Eagles need to invest a high draft pick in a tackle prospect in the near future.

Can't leave Big V on an island against Peppers pic.twitter.com/M7DcWvMghS

Rasul Douglas and Derek Barnett had decent games tonight. They were both hot and cold, but chalk it up to the inexperience.

Rasul Douglas got his second career interception and Derek Barnett logged his first career sack. On the flip side, they both looked rough at points.

The obvious: Derek Barnett took an awful roughing the passer penalty on a play where the Panthers should have been called for a delay of game. This could have been one of those times where Pete Morelli’s crew could have blown their whistles loud enough, soon enough to not have our rookie defensive end run into Cam Newton. At any rate, it was a rookie mistake by Barnett that cost the Birds seven points.

On one play Rasul Douglas is in the right place, on one play he gets torched or takes a bad holding call. I like what I see out of Douglas: he has the heart, measurables, and he’s constantly around the ball. I can’t wait to see what this kid does in the future.

9. Nelson Agholor is heating up … for real.

Bruh. He’s been playing fantastic as of late. He’s been targeted a lot by Wentz and he’s been making the most of his opportunities. If this is the real Nelson Agholor this offense will be set for years to come.

I said it. Doug Pederson was the better coach tonight. Doug had his players ready for war tonight and they responded.

Rivera didn’t help his own case, he wasted a challenge on a (superb) run by Cam Newton where he almost scored. It cost him a timeout in a situation where he had a first and goal anyway. The timeout could have came in handy later in the game.

Rivera making dumb decisions or not, Doug Pederson is a good coach. The gameplan was there again, his team was ready, and it’s about time he gets the respect he deserves.

The Eagles have a “mini-bye” coming up which is huge. They have a little extra time to get healthy before their home Monday night matchup against the Washington Redskins on the 23rd.