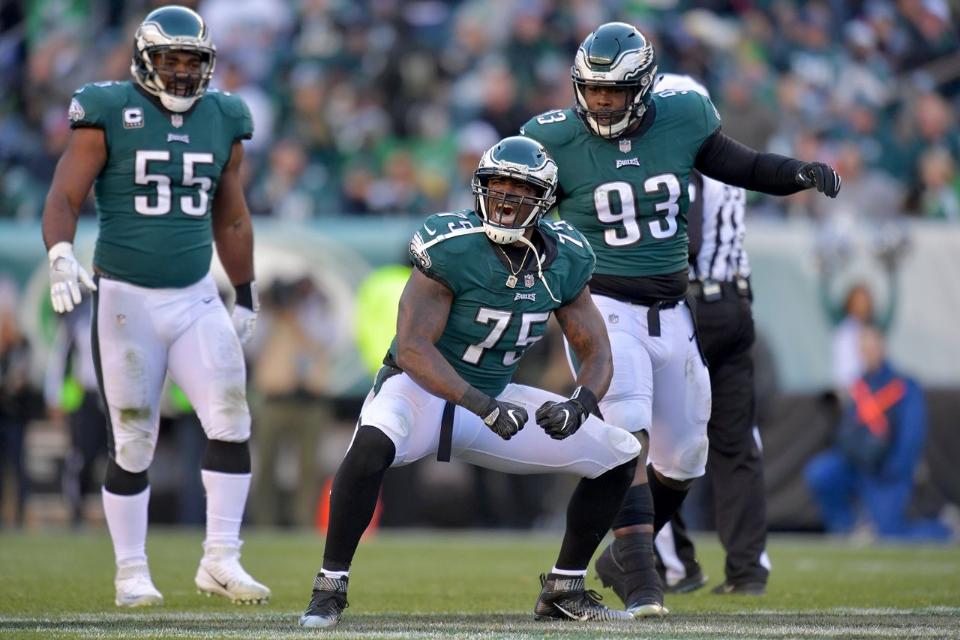 As temperatures drop in the crucial football month of December, the Eagles’ defense is falling just as rapidly.

For a team that went from Week 3 to 14 without allowing more than 24 points a game, it let up 64 in back to back wins that felt like losses.

I’ll reiterate that the Birds Super Bowl chances remain strong with Nick Foles behind center. The 28-year-old is smart, talented enough and a winner. The cloud that Chip Kelly and Jeff Fisher cast over the Texas native should most certainly be over looked. Foles belongs in the NFL and is more capable of starting than many across the league.

None of that will matter though if the defense is holding up a red matador flag going “Ole!”

Not that the electric slide contributed to the defense’s regression, but it’s kind of ironic the unit started struggling the very next game.

Instead of tackling, the Birds’ defenders are sliding. Opponents are converting third downs and scoring touchdowns in the red zone. The electricity the defensive line once sparked is minimal. The secondary can’t stay with anyone.

On my podcast, “Full Disclosure,” I shared similar sentiments about how this magical run will quickly end if the defense remains porous.

It was received as a resounding, “Duh!”

Yes, this might be an unoriginal take that just about everyone shares. However, unfortunately for the Eagles, their great run will come to an end sooner than you like if the defense doesn’t regain its form.

Time To Dump Brett Brown? I think not.

In last week’s column, I wrote how if Brett Brown’s 76ers can figure out the puzzle that is winning with a young, talented, inexperienced NBA team, watch out. That was after their overtime victory in Minnesota. Since then, the Sixers dropped three straight, two of them to lowly Sacramento and Chicago. They’re on a stretch of seven losses in eight games, regressing on defense and turning the ball over like it’s carrying germs.

I get the sense from listening to the radio and hearing some opinions of fans, that the patience with Brown is running thin.

Let’s not beat around the bush. The Sixers are underachieving at 14-16 heading into their really tough home-and-home with the very good Raptors.

However, this slide is not Brown’s fault. His players need more time to gel and build chemistry, Joel Embiid already missed nearly a third of their games, they always seem to basically “red shirt” top picks and the team lacks an abundance of players that can create their own shots.

In this recent slump, Embiid was absent in four out of six games. The Sixers are 1-6 without the big man heading to Thursday against Toronto, a game which he’s listed as questionable due to back tightness. It’s remarkable and unfortunate a 23-year-old is dealing with this much back discomfort.

The Markelle Fultz mystery continues. There is no timetable on how long the 19-year-old’s shoulder rehab will take or any indication if the No. 1 overall pick can play in the NBA.

J.J. Redick and Robert Covington are catch and shoot players. Dario Sharich is not even two years into the league.

After going through four dreadful seasons, most of which with a revolving door of players, Brown deserves until at least December 2018 to get this team right.

They are capable of making the playoffs. Just like many were patient during the “process years,” give Brown time to coach a real roster. The man earned that right.

Blame the medical staff instead for lengthy injury reports that are often handed to reporters. Transparent Sixers? Yes. But, why in the world are they always so battered?

• The Phillies’ acquisition of 31-year-old firs baseman Carlos Santana was surprising and confusing. While Santana’s power numbers are nothing eye opening, his ability to walk and rack up on base percentage is impressive. Santana most certainly makes the Phils lineup better, even if a reported $20 million a year is a bit pricey for him. The big problem is moving Rhys Hoskins to the outfield and creating a log jam. Gabe Kapler and Matt Klentak are preaching evolution and mixing and matching. They make it seem like players will be fine not playing everyday or only playing parts of games. I’ll believe that when it happens. My prediction is Aaron Altherr will be traded.

Meantime, the Phils gave Santana the No. 41 he wore in Cleveland. World Series winning manager Charlie Manuel wore that number. Shouldn’t the Phillies treat 41 as they appear to treat No. 6, 11, 26, 35 and 51?

• After going 10 games without a win, the Flyers reeled off seven victories in eight games. Heading into Thursday night, they are two points back for the last wild card spot. The Flyers claim they were playing well at moments during their slide. If that’s the case, can you imagine where they’d be if they actually finished some of those games on top?

Speaking of the Flyers, they generate the least amount of sports talk of the city’s four teams, yet they’re still drawing good numbers. I attended Wednesday’s victory over the Red Wings and sat in 221A. Without knowing for certain, it appears there are regular season ticket holders who sit in that section. They were knowledgeable, passionate and without question in love with their hockey team. This is why it’s imperative for the Orange and Black to always make the playoffs. You may never hear people talk about the Flyers on the radio, but the fans absolutely care.

Since this was the first Flyers game I attended this season, I was surprised to hear the Ric Flair “Woo’s” are still vibrant at Wells Fargo Center. Not only that, the Flyers themselves played a Flair pump up video in the third period. The franchise is embracing the “Woo” movement that started last season. However, it seems the “Woo’s” are more appealing to younger fans. The traditional Flyers faithful sitting in the row in front of me, people I suspect to be season ticket holders, really despise the “Woo’s” and clearly want them to stop. Fascinating.