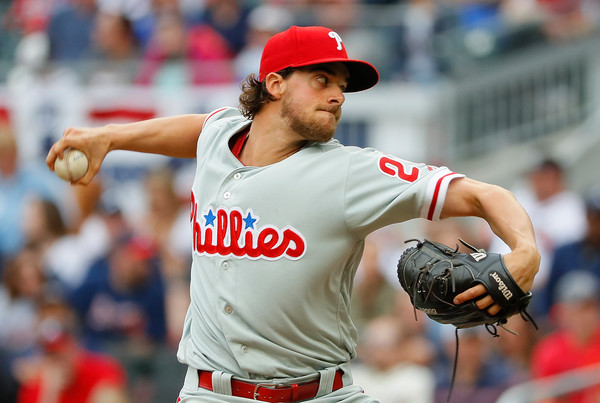 The Phillies jumped out to a 5-0 lead on Opening Day only to see the Braves steal the game in the ninth inning. The game was a wild ride; Rhys Hoskins batted in the first run of the season, Aaron Nola threw five innings of shut out baseball, and through seven innings it looked like all the hype surrounding the Phillies was real. Then the eighth and ninth innings happened where the Phillies (bullpen) allowed six unanswered runs and ultimately lost the game.

It’s easy to look at the last two innings of the game and get pissed off and be pessimistic about the outcome of the game. Trust me, I was super aggravated about it. There’s no way the Phillies should have lost on Opening Day; they were dominating the Braves through the majority of the game. Unfortunately you have to play nine full innings and the Phillies only played seven.

I’m here to remind all of you that there are some positives that came out of the first game of the season. Here are six things to keep in mind as we watch our Fightin’ Phils play 161 more games.

1. Live and die by the analytics.

The Phillies are going to live and die by analytics, Gabe Kapler made that adamantly clear by his Opening Day decisions.

Aaron Nola (more on him later) was pitching a gem going into the sixth inning. Through five full innings Nola had three strikeouts, two hits, and one walk. He let up a lead off double in the top of the sixth inning then recorded the next out. Kap pulled him in order to let Hoby Milner take on Freddie Freeman.

My knee jerk reaction was to be upset. Keep in mind, much like other Phils fans, I’m huge on Nola. Since I saw him pitch his first MLB game I thought he would be this organizations next Cole Hamels. I was mad that Kap took our ace out of the game. Then after a minute or so, I was okay with the decision. Kap knows more than we do, whether we like to think so or not. Pitching a lefty vs a lefty is, on paper, a better matchup than Nola on 68 pitches.

Hoby Milner started the at-bat strong registering a 1-2 count. He then threw back-to-back low and outside balls to draw a full count against the Braves best player. Unfortunately Freeman took the next pitch deep and cut the lead to 5-2.

*looks left*
*looks right*
*whispers* I don’t hate Kapler pulling Nola in favor of a lefty. If Milner K’s up Freeman (it was a full count, remember) no one says a word. It’s the first game of a long, long season.

This decision is a microcosm of the Phillies DNA. The Phillies are going to live and die by the analytics. More often than not, the Phillies will come out on the right side of the decisions. Unfortunately today the Phillies ended up on the wrong side.

2. Aaron Nola is the real deal.

Henceforth I will refer to him as “Future Cy Young winner Aaron Nola”.

If Kapler lets Nola pitch to his potential (instead of pulling him after 68 pitches), Aaron Nola will do some damage to opposing lineups. He is the best pitcher on the Phillies roster and one of the top up-and-coming pitchers in the MLB.

He looked incredibly comfortable on the mound In 5.1 innings he threw 68 pitches, struck out three, allowed three hits, one walk, and one run. He pretty much picked back up where he left off last season. In my opinion, this season will be a successful one for the 25-year old. When Nola takes the mound it will be must watch TV, which is a first since the Roy Halladay (RIP)-Cliff Lee-Cole Hamels days. It’s exciting just to say that.

3. Rhys Hoskins is a beast.

Hoskins went 2-3 with two doubles, one run, one RBI, and one stolen base on Opening Day. Had he hit a homerun he would have picked up where he left off last season too.

Hoskins looked the part in left field to boot. He made a couple nice plays out there, including tracking down a long fly ball.

HOSKINS WITH HIS FIRST RBI OF THE SEASON. Santana scored on a Hoskins double

It seems like the sky is the limit for this kid. His play should be enough to keep fans looking on the bright side.

4. Cesar Hernandez will hold off Scott Kingery for a while.

Cesar went 2-5 with a homerun. He played sound defense and showed why he is the Phils leadoff hitter. He’s proven in the past that he will hit around .300 and 10 HR while playing good defense at second base. Unfortunately for Kingery that will be enough to continue playing. Not many people can turn down a .300 hitter who plays solid defense.

Luckily for Kingery, he knows that he is the future of the franchise at second base. The good news here is that the Phillies can get the max out of Hernandez. This is beneficial because they will get a plus-second baseman who can be flipped for pitching. I wouldn’t be shocked if the Phillies package Cesar, another player, and a prospect for a top of the rotation pitcher at the deadline. If this happens Kingery can take over at second and they will strengthen one of their weaknesses.

Here’s hoping Hernandez can keep it up.

5. Carlos Santana is worth the money.

I know what you’re thinking, Santana went 0-5 at the dish today. Despite that, he looked comfortable at the plate on Thursday afternoon. He hit into a fielder’s choice in the first inning, advanced to second on a wild pitch, and scored on Hoskins’ double.

Santana had an elite day in the field. He’s the best first baseman the Phillies had since 2009-2011 Ryan Howard. The end of the first inning through the second inning Santana recorded three straight outs.

Carlos Santana earning his money through one inning of baseball. #Phillies up 1-0 after one.

The hits are going to come for Santana. Where he is going to make his money is in the locker room. He is a mentor to Maikel Franco who is trying to have a break out season. It’s been reported that the two are working well together. Under Santana’s tutelage Franco is trying to be a force at the hot corner and in the middle of the Phillies batting order. (For what it’s worth, Franco drew two walks on Thursday afternoon. Chalk it up to Santana’s leadership, the batting coach, or a natural maturation, Franco is already looking like a different player).

1/162 or .0062% of the season has passed. A lot of people are out here calling for Gabe Kapler’s head. This was his first Major League game as a manager. I’ll admit that he did overthink some things at some points, but chalk it up to a rookie mistake. I thought he made a lot of smart decisions (I’ll stand by pulling Nola until the day I die). He also made some silly decisions (I’ll never understand why he pulled Hoskins in favor of Herrera). I think Gabe Kapler is smart enough to learn from his mistakes today and be better in the future. It’s an incredibly long season. Things didn’t go his way this time, but who’s to say that they won’t go his way next time? If the bullpen doesn’t fold under pressure and blow a 5-0 lead we’re not having this conversation. Regardless, Kap will take a lot of things into consideration moving forward and do his best to put his team in the best position to win the game. This could mean riding a starter later into the game. It could mean leaving his best hitter in the lineup. It could mean relying on “his dudes in the bullpen” to secure the win.

It’s his first game, how about we cut the Skip some slack? No? Alright then… https://t.co/s6BvnNBmV7

Next time you think you want Kapler gone, just remember how you felt about Doug Pederson at the end of the 2016 season. Were you happy with Doug after the Birds went 7-9? Not many people were. This past Eagles season was about pushing for a playoff position, not winning the Super Bowl. How do you feel about Dougie P now?

I’m not saying the Phillies are going to go on a World Series run, but cut the man some slack. It was his first game as a manager. This loss hurt, don’t get me wrong, but I’m ready to move on and be stronger because of it.

The Phillies return to action on Friday night at 7:35 in Atlanta.