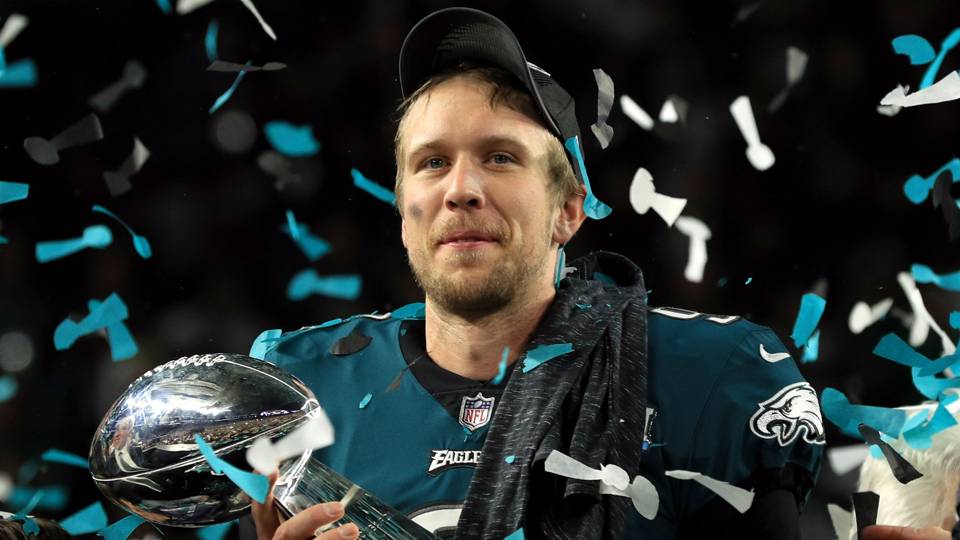 The 2018 ESPY Awards took place on Wednesday, July 18th, live from the Microsoft Theater in Los Angeles. Host Danika Patrick took to the stage for a
night of jokes, performances, and trophies.

Philly was well represented with nominations and presenters throughout the entire evening. As the red carpet began to fill up, several key players from the region made their presence felt. 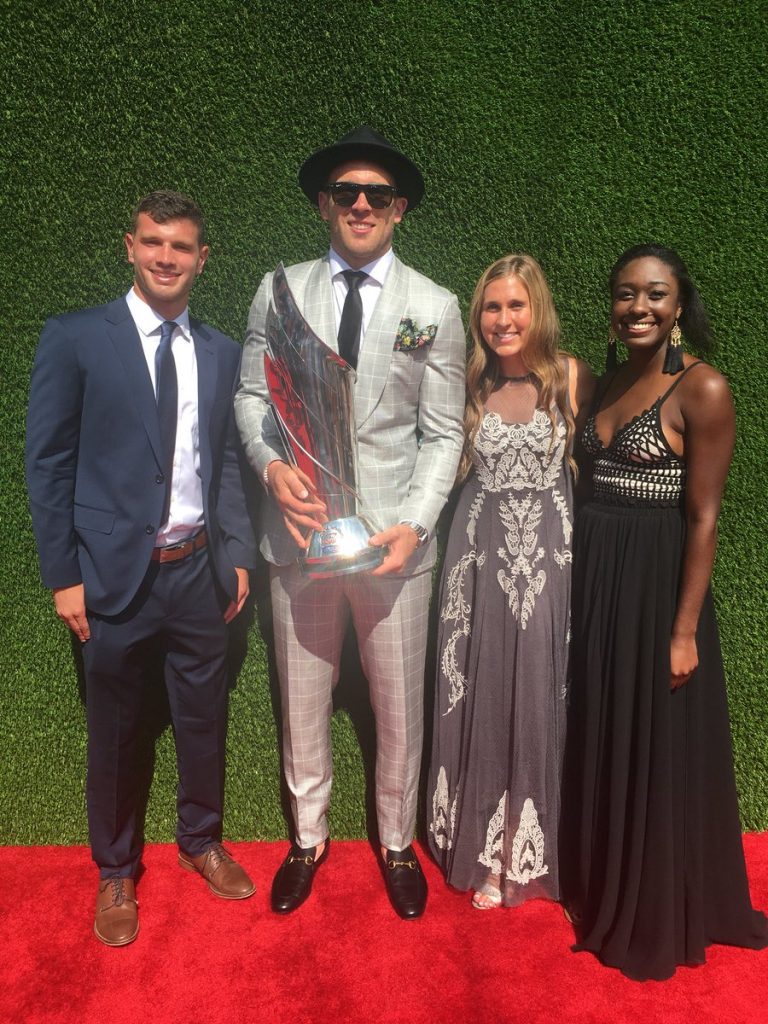 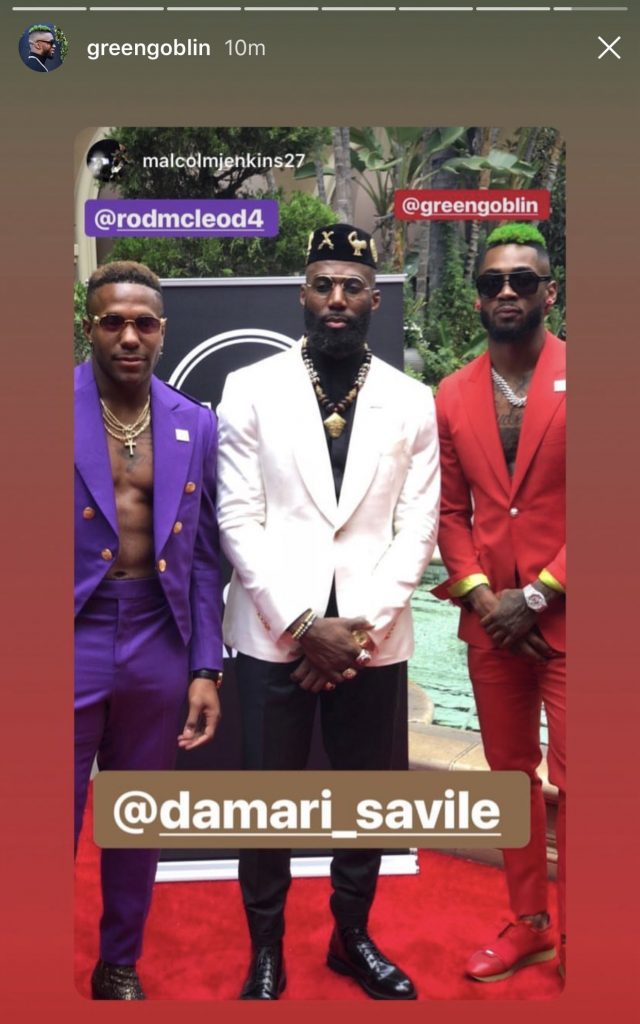 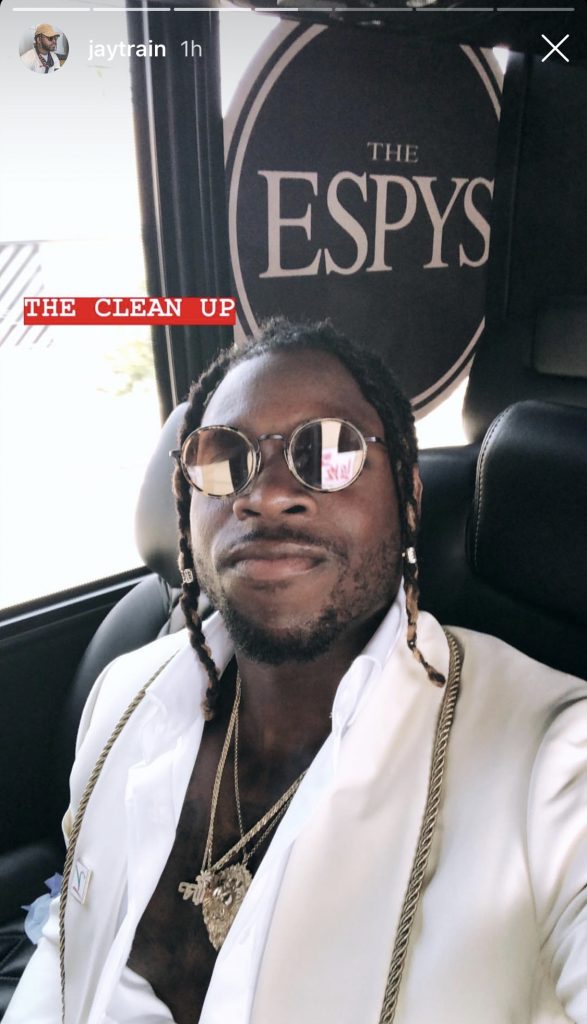 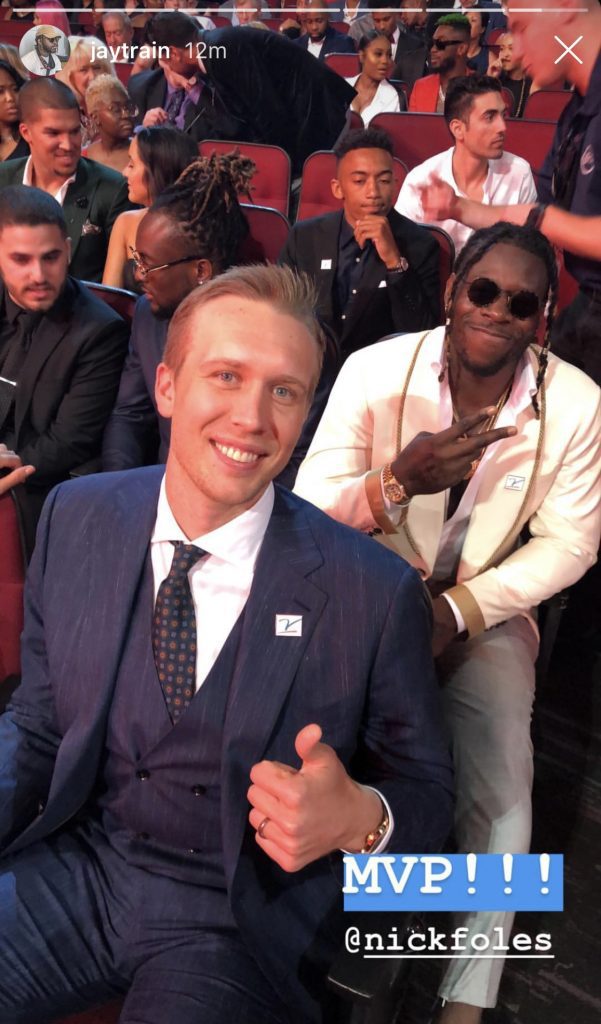 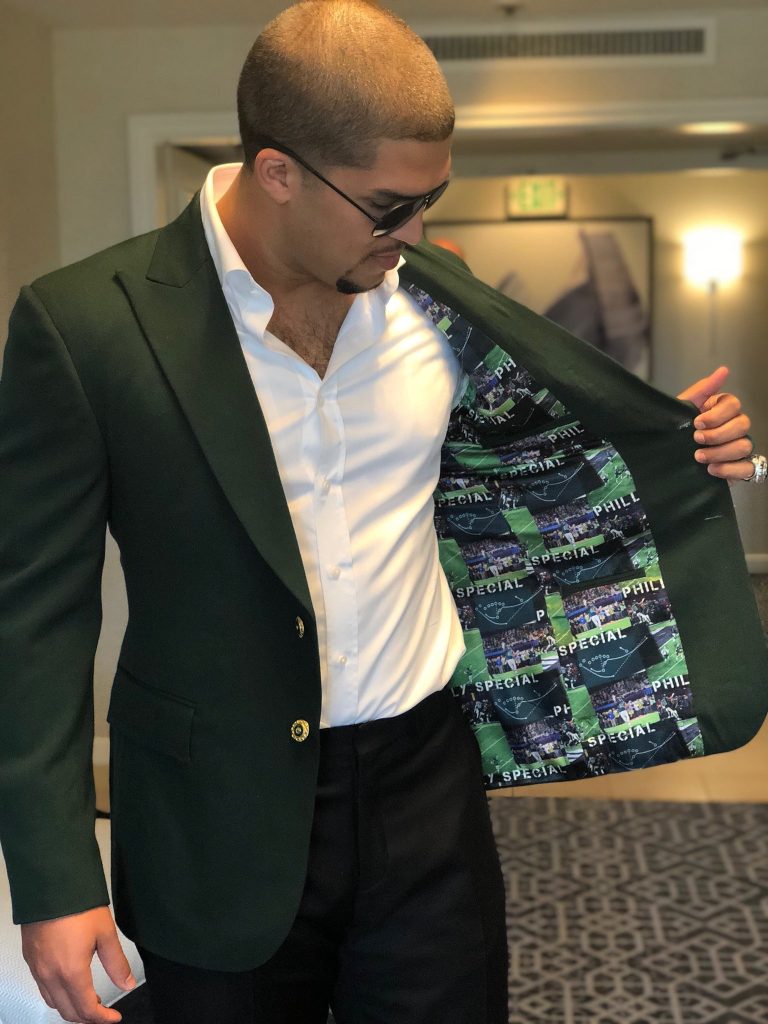 And it wouldn’t be a pre-show without a slow-mo cam:

The @Eagles are hoping to add to their trophy case at the #ESPYS as Best Team.

The night began with a little of a surprise. Donovan Mitchell won Best Breakthrough Athlete over Alvin Kamara, Sloane Stephens, and Ben Simmons. However, the region and fanbases were well represented: 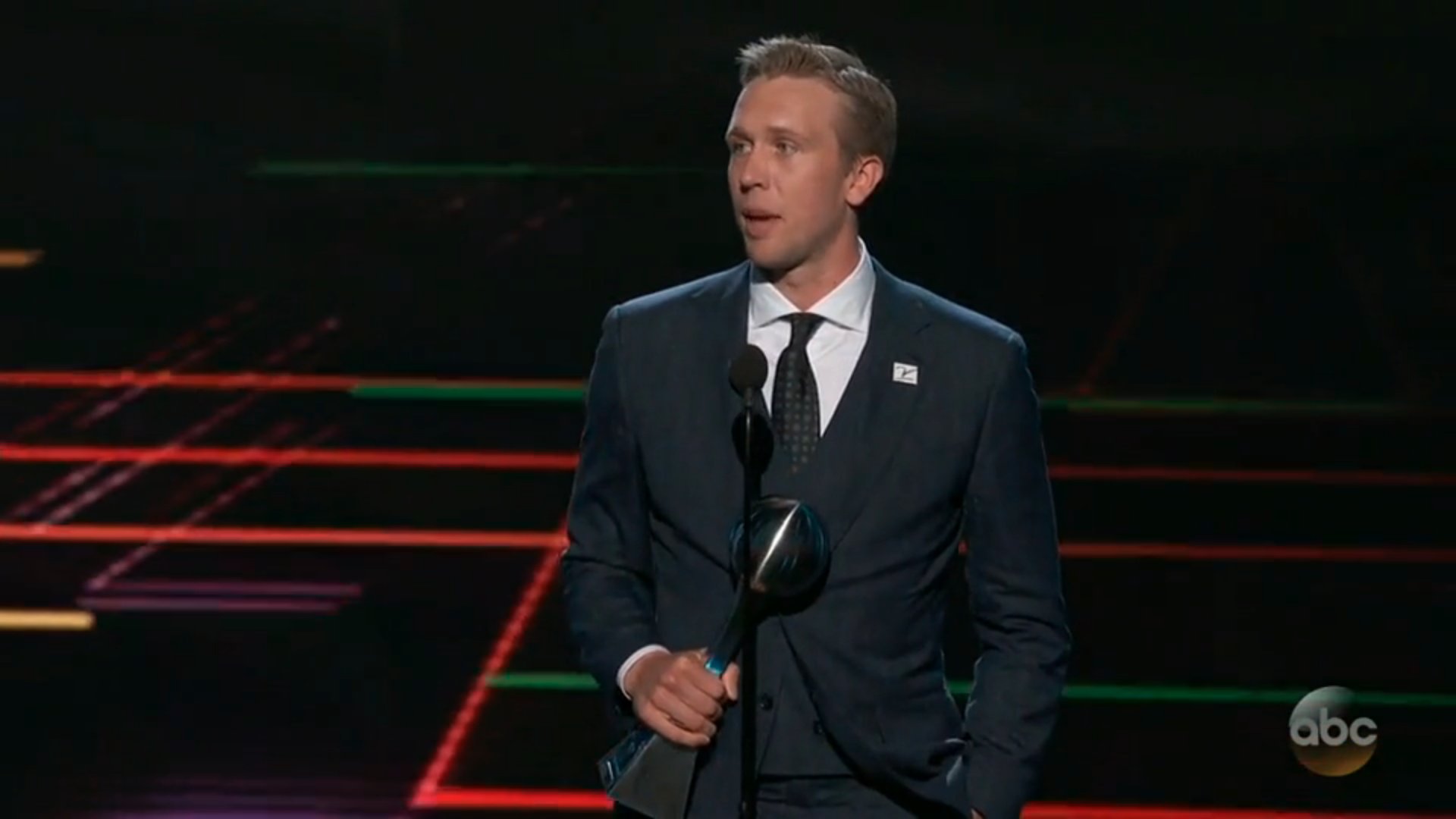 Danika Patrick’s opening monologue stayed true to the usual award show meter. It was chuckle-worthy at some parts and cringeworthy at others. Sgt. Jake Wood received the Pat Tillman Award for Service for his work in disaster relief and emergency response. The former Marine is also co-founder and CEO of benevolent company Team Rubicon. The Vikings received the Best Moment award. The Minnesota Miracle propelled them to a NFC Championship game a week later where they were desimated by the Philadelphia Eagles 38-7. Nick Foles finally broke the Philadelphia drought with his win for Best Championship Performance. This was the only local athlete to win in the entire program. No one likes us we don’t care. 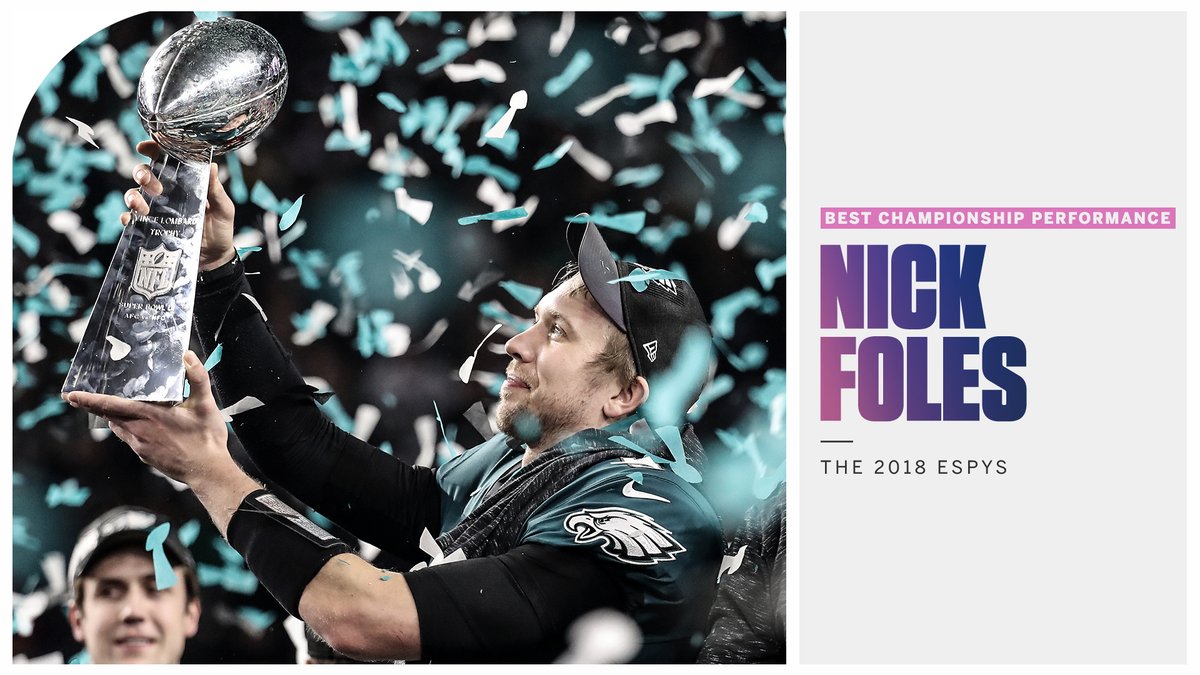 Jim Kelly received the Jimmy V Award for Perseverance. Kelly was lauded for his heroic fight with cancer and unflinching determination. He delivered a pheomenal speech of inspiration and the relentess will of never surrendering. There weas also a touching segment deidcated to three brave coaches who saved their students lives during the tragedy at Marjory Stoneman Douglass Highschool in February 2018. Another moment of poignancy and strength came when the survivors of the massive US Gymnastics scandal graced the stage.

In totality, the awards show was a celebration of the calendar year of athleticism. The culmination of effort and the power of teamwork. The city might not have gotten all of its glory and applause but the great feats of triumph displayed Wednesday night surely deserved them.

Jim Kelly … one of the toughest men you’ll ever know. #Hero

When you see the Minnesota Vikings win best moment at the Espys and your a Saints fan smh #ESPYS #ESPYS2018 #WhoDatNation pic.twitter.com/Fq0jrjVOpu

I can name one thing. Super bowl 52.
4th and goal. Diract snap to Corey Clement. Pitch to trey burton. Nick foles running his route perfectly. Catches one of the biggest passes of the game. Philly philly. #FlyEaglesFly #ESPYS https://t.co/SkUA57YvHY

I can understand the Eagles not winning every category at the #ESPYS but they must have something against Villanova. pic.twitter.com/yPCYqCj6CI

Love and admire the courageousness and strength of the women of Us gymnastics. Your stories are being heard and you are making a huge difference in the world!! We love you! #ESPYS