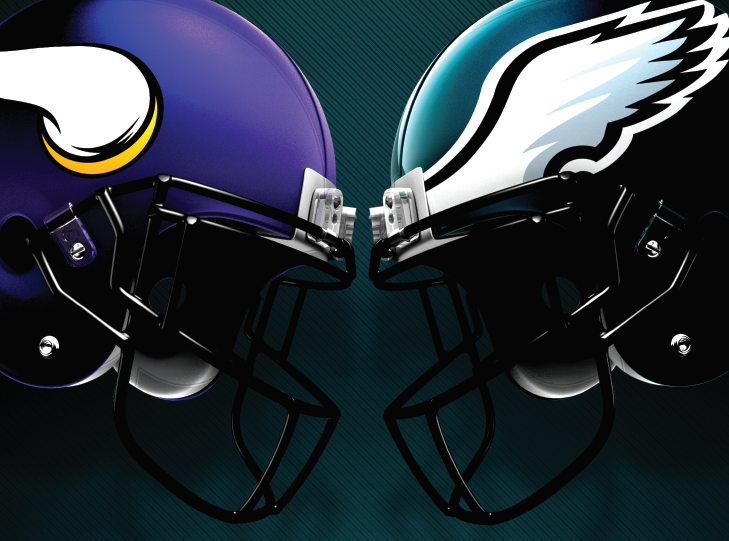 Well, we all have a little egg on our face after last week’s debacle in Tennessee with the exception of Candis, who correctly predicted the Titans would defeat the Eagles.

But it shouldn’t have even been close. The Eagles had a 17-3 lead in the third quarter and if recent history has taught us anything, it’s that these players would stomp on the throat.

But, alas, the Titans came back and got the win in overtime. It wasn’t a great performance at all by the Birds’ defense, but it was a little disappointing that the offense played as conservatively as they did once they had the 17-3 lead. Hell, they played conservative pretty much the entire game. Doug Pederson’s got to fix that.

Can he do it at home against the Vikings, a team that hasn’t won since Week 1 against the 49ers? With back-to-back losses after a tie, the Vikings certainly will bring their A game to The Linc on Sunday afternoon. Will the Birds’ defense continue to be impenetrable at home? Will Kirk Cousins return to the gunslinger who dominated the Birds during his time in Washington before last season?

One thing’s for sure – this could definitely be the game of the week.

The Eagles were a 4th-and-15 stop away from getting their first road win of the season last Sunday. This Sunday, they return to the confines of The Linc where they play exceptionally well. The Birds play an equally inconsistent team in Minnesota who have shown they can get stomped into the dirt by Josh Allen one week and hang with the Rams the next. In the war of teams searching for a 2018 identity, I’ll pick the home team in a close one.

This one is tough. At 1-2-1, the Vikings are coming into Philly incredibly desperate for a win. Add in the fact that they’re going to want redemption from that 38-7 whooping the Birds put on them in the NFC Championship Game and Doug Pederson’s group is going to have their hands full for sure. Not to mention Kirk Cousins knows this Eagle defense, he’s played them twice a year since 2015 when he became the starter in Washington. I don’t think Kurt is a world-beater, but I think he knows what it takes to beat this Eagles defense.

Now that that’s out of the way, the Eagles have a legitimate shot to win this game. Let’s be real – the Eagles are a totally different team at home. Despite their two incredibly bad road losses, I maintain they are a good team that will win the NFC East. That starts on Sunday at 4:25 p.m.
With Carson Wentz, Alshon Jeffery and Zach Ertz all healthy together, I think they have a chance to carve up this Vikings team that’s been lackluster defensively without Everson Griffen. Call it homer intuition all you want, but I’m gonna ride with the Eagles here in a slugfest.

Minnesota’s offensive line and running game have been non-existent in the last couple of weeks, and the Eagles have a wall of a defensive line vs. the run, especially at home. On the other hand, the Birds’ offensive line hasn’t been much better. Is it lack of concentration or something more ominous? The Eagles are favored by three at home and that’s about all the points I’d be willing to give away and stay with the Birds. It’s practically a must-win game for both teams, but I’ll take the home team.

I come into this week with mixed emotions. If you go back to the preseason when I was advocating for the trade of Nick Foles, my main focus was being content with 2-2 after four games. However, after watching this product vs. the one that was pre-determined, my stance clearly has changed. We all know the issues, but are left wonder if/when they will be corrected.

After last year’s convincing win against the Vikings, many feel they will be out for revenge. While this may be the case, the “SKOL!” chants will be silenced by an unmatched round of fight song soliloquy and ceremonious boos. Wentz to Jeffery will run on replay, while Long Cox will be smacking Kirk in the face. Pardon me while I take a page out of the book of Johnny Chase and claim “VICCCCC-TORRRRRRR-YYYYYYY!”

This game is going to be won in the trenches, which is usually the Eagles’ greatest strength, but hasn’t been so far this season. The defensive line might finally be able to get back on track against Minnesota’s shoddy offensive line and they’re going to have to with the secondary struggling. The offensive line needs to show up because the offense has all of their pieces back. I’ve got the Birds at home in a nail-biter, the lines will play better.

WELL… here we go! We’re about to find out how good the Eagles are. Sure, the Vikings are a good team but I can’t help but look at the next four games on the schedule. After the Vikes, it’s a quick turnaround vs. the Giants, then a tough game vs. Cam and the Panthers… AND THEN we get to travel across the pond to take on the Jags.

I have the Eagles winning the next two. You feel me?

Despite the success Kirk Cousins has had against the Eagles’ defense through the years, this is a different team. And while this Eagles team is different than last season, they play pretty much the same way at home and have for two-plus seasons. Carson Wentz is still finding a groove, but he’s good enough to beat this Viking defense. The offensive line needs to show up, and I’d put money on the defense showing up.

The Birds aren’t gonna let me down a third time, especially on my birthday.