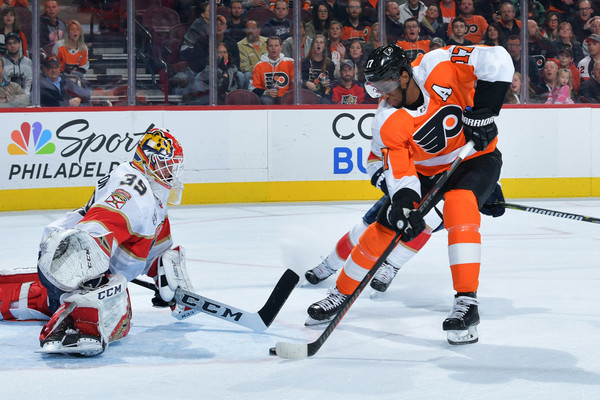 I swear on everything I know and love, I will never understand this Flyers team.

The old adage goes that insanity is doing the same thing over and over and expecting a different result. The Flyers can’t keep trotting the same product on the ice and expect something different to happen. The way they stand both with personnel and coaching staff, they are a slightly above average team. Something has to give if they want to seriously be among the league’s elite.

On October 27, the Flyers get mauled by the Islanders 6-1 on home ice for their third straight loss. They head on a west coast road trip and snag seven out of a possible eight points. They flash dominance and save Dave Hakstol’s job. They come home and beat the Coyotes in overtime, shut out the Blackhawks, then drop two straight in lackluster fashion. It would have been three straight if it weren’t for the historic comeback on Saturday against the Lightning only to lose in overtime.

It’s so weird – on paper this Flyers team should be able to score with the best in the league. This is the first time in year’s they can run three lines with a legitimate scoring chance. Line 1: Claude Giroux-Sean Couturier-Travis Konecny. Line 2: Jake Voracek-Nolan Patrick-Patrick Lindblom. Line 3: James van Riemsdyk-Jordan Weal-Wayne Simmonds. Not every team has two 30-goal scorers on the third line. Granted, JVR is just getting back from his injury stint, there is a lot to like about that offensive lineup.

One of the problems I see is the defense. Ivan Provorov isn’t looking like the same player he was in his first two years. From there – Shayne Gostisbehere is himself, he’s always been a better offense generator than shut down defenseman. Radko Gudas is Radko Gudas, he’s a third pair guy. Travis Sanheim is still learning, unfortunately, and he could be better had he found time over Brandon Manning last year [I won’t forget, Dave]. Robert Hagg shows flashes offensively; I like that he isn’t afraid to throw his body around, too. Finally, between Christian Folin and Andrew MacDonald there isn’t really much to like. Sure, Folin has been playing better of late, but he’s still a fringe defender at best. This is definitely a position where the Flyers could get better.

Problem number two is the goaltending. With Brian Elliott shelfed for two weeks with a lower body injury the Flyers are left with Cal Pickard and Alex Lyon as their two netminders. Michal Neuvirth is hurt again for the 11th time this year as well.

Problem number three, and quite possibly the biggest problem, is the Flyers special teams. Sometimes the wheel doesn’t need to be re-invented. Check out this tweet from Dave Isaac:

Flyers’ penalty kill looks wayyyyy better than its power play. And their PK is ranked 30th.

The penalty kill is disgusting and the power play isn’t much better. It could improve with JVR coming back, but I wouldn’t hold my breath. It’s a stale product that needs to be refreshed some way.

With a few problems listed; here are my solutions:

1. I know I said the offense shouldn’t be the problem, but unfortunately it kind of is a problem. Two times on the homestand the Flyers were held to under one goal. Save for the quasi-miracle on Saturday and it could have been three. I’d absolutely kick the tires on William Nylander if I was Hextall. It looks like the Maple Leafs had some interest at a recent Flyers game.

I’d explore parting ways with a blue line prospect like Philippe Myers and a sweetener for him. Nylander in his past two years scored 22 goals, 39 assists and 20 goals 41 assists in his 20 and 21 year old seasons. He could be another building block for this Flyers team.

2. I don’t necessarily know that this would be great for the locker room but I wouldn’t be opposed to a Wayne Simmonds trade. I’m not quite sure the Flyers would want to part ways with their alternate captain and locker room stalwart, but I’m not sold on a Simmonds reunion this offseason – I would rather see the Flyers get a return for him. That said, refer to the Isaac tweet above. The Stars had scouts at a recent Flyers game – could Simmonds go to a contender? I would try to send Simmer and a prospect there and try to pry away one of their young defenseman like Connor Carrick or Julius Honka. Again, this is purely speculation but two birds, one stone. Trade away an expiring contract and get younger in the process.

3. I would not trade for a goalie.

Hextall made his bed and now he should sleep in it. I don’t want to see Jimmy Howard come here; I don’t want to trade any talent to inevitably see Carter Hart take over in a year or so. They just have to deal with some combination of Brian Elliott, Michal Neuvirth, Cal Pickard, Alex Lyon and Anthony Stolarz. This could be OK if the PK and defense improve.

4. There needs to be wholesale coaching changes in the near future. Dave Hakstol isn’t the answer and Ian Laperriere isn’t either. Unless the Flyers go on a serious skid, I doubt Hexy will fire Hak. He can, however, relieve Lappy of his duties. Move him to player development, give him a job in scouting, just get him off the bench.

As much as I want Joel Quenneville, I think that might be the most far-fetched solution I could think of. It’s too simple, there’s no way Hexy will pull that off.