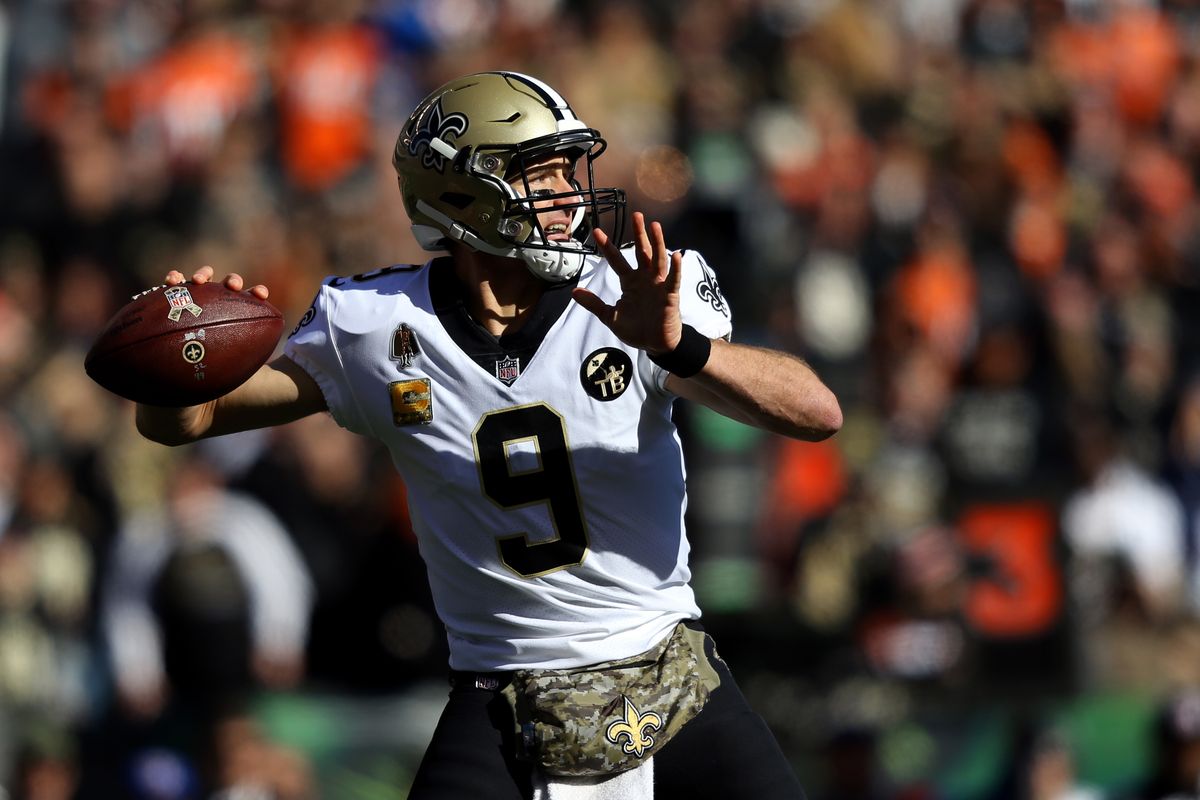 The Philadelphia Eagles are desperate for a win, but they have to go down to New Orleans to square off with the hottest team in football.

It ain’t gonna be easy.

Carson Wentz needs to be Superman for the Eagles on Sunday and match Drew Brees and the Saints offense score for score.

Sounds daunting at the moment, I know.

The Eagles need to play a perfect game and it starts with the offense and playing keep-away. They need to make this an eight-possession game instead of 12, which is the NFL average. They need to keep the ball for 5-to-10 minutes at a time. Wentz needs to finish those drives and throw 4-to-5 touchdowns.

Carson Wentz with a dime to Nelson Agholor for 51 yards, he dropped it right into his lap pic.twitter.com/PxZlEFb1SZ

A hot start would be nice too. After finishing second in the NFL in first quarter scoring last year (6.4 ppg), the Eagles have totaled only 21 points in the opening frame this year, which is the worse in the NFL (2.3 ppg). Doug Pederson admitted that he needs to do a better job in this area.

“That’s solely on me. And I base it based on the film. I go back and look at all their games and I see how they start that first series, that first drive, and try to put plays accordingly. Then I have to go back and look at how we started games by play call, play design, so that I’m not repeating and having any indicators there. In the case of some of our struggles, it has just been, just our execution. Just sustaining a block or the read by the quarterback or – and to me, that’s kind of where if there’s an urgency moment how we start games, that’s where the urgency, I think, coaches, players, everybody involved really needs to sort of heighten so that we can stay on the field and go down and score points.”

In order for everything to be perfect, Wentz is going to need help. First, the offensive line needs to do something that they haven’t done all year, that’s keep Wentz clean and not allow a sack. Seems impossible considering no line has surrendered more hits to their quarterback than the Eagles. Pederson said during Friday’s press conference that he expects Lane Johnson to be back to man the right side of the line. He’ll be going against Cam Jordan, who has six of the Saints’ 21 sacks on the year. There will be a fun matchup inside between Brandon Brooks and Sheldon Rankins, who has tallied five sacks. Rookie Marcus Davenport has registered four sacks, but he’s out with a toe injury.

Where the Saints are at their weakest is in the secondary. Four quarterbacks have eclipsed the 350-yard mark against them and seven wide receivers have gone for over 100 yards this season. Alshon Jeffery and Marshon Lattimore will be going at it in a fun matchup. Lattimore has seen a sophomore slump after a stellar rookie campaign.

Golden Tate, who was targeted only four times in his Eagles debut against Dallas, had 31 catches for 440 yards and five touchdowns in four games against New Orleans while he was in Detroit. Getting him involved in the screen game will be important because picking up those 6-to-7 yards at a time is going to keep the chains moving and that clock churning.

Pederson explained during his presser Friday how far along Tate is in knowing the playbook.

“He doesn’t know it all, because we’re not throwing it all at him. But he has a really good handle now going into like I said his third week really with us. And really just the amount of practice reps that he gets and seeing it over and over and over again. He has a good grasp of kind of what we’re doing and how we’re kind of positioning him, each and every week.”

Pederson said tempo was the reason why Tate didn’t see more than 29 percent of the snaps, will that affect him this week?

“Not as much. We’ve had time to kind of coach off of last week’s film during the game, and then obviously kind of work it in practice this week. I think he feels more comfortable with some of the formations and code words that we do use.”

How much of a factor will Zach Ertz have? The Saints have done a solid job covering tight ends this season, allowing just 361 yards and a touchdown to them this year. This might’ve been a glaring hole for New Orleans in the past, but the trio of Demario Davis, A.J. Klein and Alex Anzalone have done a solid job of dropping back in coverage and containing tight ends and running backs all year. The problem here is the athleticism of Ertz and Dallas Goedert, so Saints defensive coordinator may have to use his safeties Marcus Williams and Vonn Bell in man-to-man coverage on them.

“I thought [RB] Josh [Adams] played well. He’s improved each week. Do I think he can have a few more touches? I do. So that will answer everybody’s questions right there. I do feel like he could touch the ball a few more times.”

“We’re seeing good things from Josh, and he continues to warrant consideration for more playing time. I think that having missed the spring and most of training camp, he’s really just starting to play his best ball. I think you’ll see Josh moving forward.”

After carrying the ball nine times for 67 yards against Jacksonville, Adams followed that up by gaining 47 yards on seven totes. Let’s try and get him at least 12 carries this week!

New Orleans went from being a bottom six run defense a year ago to leading the NFL this season. A big reason for that has been the offseason acquisition of Davis. Saints head coach Sean Payton explained why they targeted Davis during the offseason.

“You saw a physical tackler. We saw leadership in him. We felt he had position flexibility between Will and Mike (weakside and middle linebacker).”

Davis leads the Saints with 67 tackles, with six of them going for a loss.

So I spoke above about how Wentz is going to have to outduel Brees and match him score for score, the defense is going to have to generate turnovers, a difficult task considering they have just seven on the year (tied for 3rd fewest) and Brees has tossed just one interception.

This Saints offense is rolling after putting up 51 points against Cincinnati last Sunday.

If the Eagles are going to make this an eight-possession game and play keep-away, New Orleans is going to need some empty drives. The way to do that is by taking the ball away or getting sacks, both of which have been rare occurrences for the Saints. Brees has been sacked fewer than any quarterback in the NFL with nine and the Saints have just eight turnovers as a team, which is tied for the fifth fewest.

So good luck with generating a consistent pass rush with what has been an inconsistent group all season going against arguably the best pass protecting offense line in football at the moment.

Then there’s the dire situation in the secondary. Ronald Darby is out for the season after tearing his ACL last week and Jalen Mills will miss another week with his foot injury. Sidney Jones is expected to return from his hamstring injury. With both starting cornerbacks for the Eagles out, will they move Jones to the outside and play Avonte Maddox in the slot?

The other outside corner would be Rasul Douglas, who struggled with the quickness of Amari Cooper last week. He also whiffed on some several critical tackles.

Eagles defensive coordinator Jim Schwartz commented about the injuries to the cornerbacks.

It might look different than when we were at 100% strength.

Michael Thomas is licking his chops.

There’s a myth going around that the Eagles are still stopping the run this year.

Ezekiel Elliott totaled 151 yards on 19 carries last week as the Eagles run defense is now allowing 4.7 yards per carry, which is 23rd in the NFL. It doesn’t get easier Sunday handling the quick and shifty Alvin Kamara on Sunday. Schwartz spoke of the run defense against Dallas.

Tackling. You have guys in positions to tackle. Again, tackling, I think a lot of times you guys look at it as a one-on-one thing. I don’t look at tackling as a one-on-one thing. Not only is it the guy getting the guy down, but it’s everybody else supporting him so he doesn’t have to make a two-way tackle, and different things like that. Plus, it’s a tough situation sometimes when a guy has to make a tackle when a ball has broken through our front seven. We didn’t see many of those in the pass. We saw a couple of them on Sunday night. I mean, all due respect, [Cowboys RB] Ezekiel Elliott’s a great running back, but we shouldn’t give up rushing yards like that.

Not only is Kamara quick and shifty, his balance is incredible and his threat as a pass catcher only gives the Saints more ammunition. Brees’ accuracy is so spot-on as well that Kamara is always able to run after the catch seamlessly or turn upfield.

PREDICTION: While this New Orleans game has a similar feel to the New England miracle in 2015, let’s remember that the Eagles needed a blocked punt return TD, punt return TD and pick-six to pull off that shocker. I just don’t see the Eagles winning Sunday.