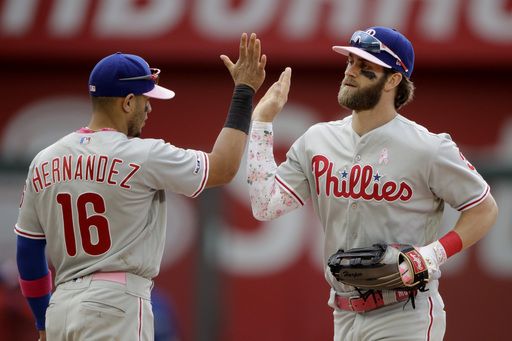 While the Philadelphia Phillies are not in the midst of an impressive winning streak, the team is, however, pulling further away from the 13-12 record it held on April 15. After being dangerously close to falling to a .500 record, the Phillies are now 23-16. That record has the Phillies at third in the National League and at the top of the National League East. Coming into Philadelphia is a team just below the Phillies in the NL, and that is the Milwaukee Brewers. Let’s have a look at this exciting mid-May series!

The past two series have been kind to the Phillies starting rotation. Eflin earned his second complete game of the season. Eickhoff continues his impressive return to the rotation this season. Despite concerns in April, all seems to be well with Nola. Also, can’t forget about the impressive debut of Cole Irvin on Sunday.

The @Phillies‘ No. 16 prospect allowed just one run over seven frames while leading the #Phillies to a 6-1 victory over Kansas City.

It’s hard to believe, but there now seems to be a bit of depth for the Phillies rotation. Irvin proved that he can certainly help the team this season, even in a small workload. Pair that with the breakout performances from Eflin, and the eventual returns of Vince Velasquez and Nick Pivetta, things don’t look so bad. There are six-to-seven pitchers that the Phillies can use that can, at the least, give them a chance in games.

Despite the recent success and improved outlook, things aren’t exactly stable. There’s not been any sustained success with guys like Irvin, Eflin, and Velasquez, but they don’t need to be. As long as the Phillies can ride any kind of momentum with the current rotation, it puts them in a good spot when help comes in July.

Also, as a result of good starting pitching, the bullpen has not allowed a run in the past five games. The usage of the Phillies bullpen has been minimal and that is certainly what was needed, especially for Seranthony Dominguez. His last two outings have been good and Hector Neris has still been outstanding.

As we get into the series with Milwaukee, keep a closer eye on Edgar Garcia. It will be tough to expect everything to go smooth against a strong Brewers lineup. The Phillies are continuing to look for a reliable reliever and Garcia is a potential candidate for that.

While Bryce Harper continues to try to find his stroke, the rest of the lineup has picked up the slack The Phillies have been much more consistent averaging 5.6 runs since the start of May. It’s largely due to the same reasons that gave the Phillies success earlier this season.

It was proven early on that each hitter in the lineup was a threat. From Andrew McCutchen all the way down to the greatest eight-hole hitter in the history of of baseball, Maikel Franco. That wasn’t as prevalent towards the end of April, as injuries started to plague the team. Now that health has improved, so has the lineup.

Turns out all we needed was the 5th inning today.#RingTheBell pic.twitter.com/8XPrnHW4ZE

With all starters returned, the Phillies have once again become a feared lineup. There has been improved performances throughout and that should be attributed to the team being back at full strength. A problem that has risen however is the Phillies bench. Aaron Altherr was just one casualty of the disappointment from the bench. At some point it should be expected for the Phillies to add another bat.

Game 1:
Freddy Peralta – o/u 5.5 strikeouts – Peralta has only one game with more than five strikeouts. UNDER
Aaron Nola – o/u 6.5 strikeouts – Nola’s been good lately, Brewers are second in strikeouts and a favorable umpire behind the plate. OVER
Total Runs – o/u 8 runs – The Cubs held off a good Brewers lineup in the three-game series in Chicago. I would take the under for this game, but this could be a good barometer of how the rest of the series will play out with two potent lineups. Also, when umpire Mark Everitt is been behind the plate, the under record is 6-2. UNDER

Herrera had a great series against the Cardinals and Royals. When Herrera gets on one of these hot streaks, take advantage of it.

Well, with the Philadelphia 76ers season in the books, a shift in Philly sports will now focus solely on the Phillies. With summer just around the corner the excitement will continue to grow with this team. So if you’re just starting to turn your attention to the Phillies, here is what you need to know as we head into the heart of the season.

Bryce Harper: The new face of the franchise has not gotten off to the best start in his first season with the team. But it’s not a surprise to see Harper hit a rough stretch. He’s been through plenty of them. So don’t expect this kind of play to continue. Harper is still one of the top players in baseball and will eventually slug his way out of this slump. Just be patient because when Harper home runs start to hit the summer air, it’s going to be a lot of fun.

Change: When the time comes, the Phillies are expected to make some moves at the trade deadline. It especially helps that the Phillies are currently third in the National League. If it gets to the point where the Phillies are contending for a top spot in the NL, I think we can expect a big move come July.

Buckle up: From what we’ve seen so far this season, it’s going to be a wild summer. As the Phillies find their footing, there is going to come a time where things click and we start to see the best version of this team. When that time comes, grab a cold one, a hot dog and enjoy the most exciting summer of Phillies baseball we’ve seen in a few years.