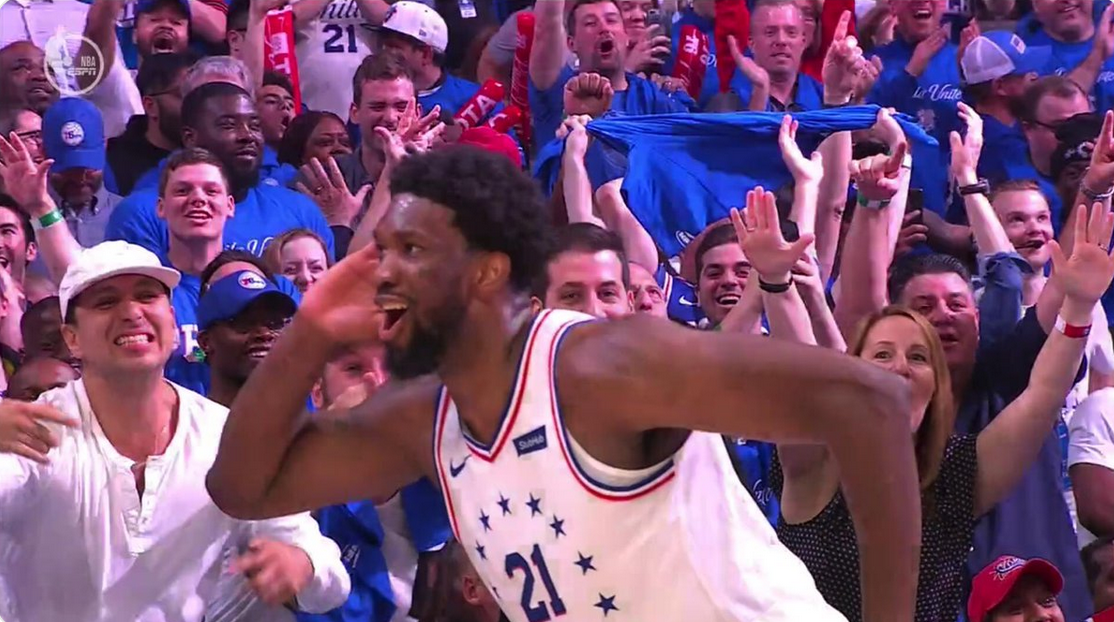 Well, that was a punch to the groin for Toronto.

JojoMania was runnin’ wild in Game 3.

Joel Embiid had 33 points, 10 rebounds and five blocks as the Philadelphia 76ers led wire-to-wire in a 116-95 shellacking of the Toronto Raptors on Thursday night to take a 2-1 series lead in their Eastern Conference semifinal series.

Embiid was 9-of-18 from the floor and not only had a pair of blocks on Pascal Siakam which left him trippin’, he also swiped a Kawhi Leonard attempt away at the rim on a drive to the basket. It was much better than the 2-for-7 night he had in Game 2.

This thunderous windmill down the lane had Wells Fargo Center rocking.

JOJO WINDMILL AND THE SIXERS ARE KICKING THE RAPTORS ASS pic.twitter.com/GUjM4d7YjN

A feisty Ben Simmons was involved in a pair of controversial incidents, first this elbow to Kyle Lowry’s lower extremities.

He also received a technical at the end of the third quarter after leaping at the rim and tossing a Pascal Siakam shot attempt back towards him. Simmons finished with 10 points, seven rebounds and seven assists.

Lmaoooo, Ben Simmons is on one tonight😂pic.twitter.com/8ReAunFbxx

Jimmy Butler followed up his 30-point performance in Game 2 with 22 points, nine boards and nine helpers, Tobias Harris chipped in with 13 points and eight rebounds and James Ennis was the leading scorer off the bench again with 10.

Ben Simmons throws it up, Jimmy Butler throws it DOWN 😤 pic.twitter.com/POXJLAtClx

Kawhi Leonard still got his, netting 33 on 13-of-22 efficiency, but the Sixers packed the paint again and forced Toronto to beat them along the perimeter, which it did not. The Raptors were just 7-of-27 from long distance (25.9 percent), while Philly was 10-of-23 (43.5 percent). The Sixers also held a comfortable 45-35 advantage on the boards.

Philadelphia led 64-53 at the break and never trailed by less than seven in the second half en route to their dominant win.