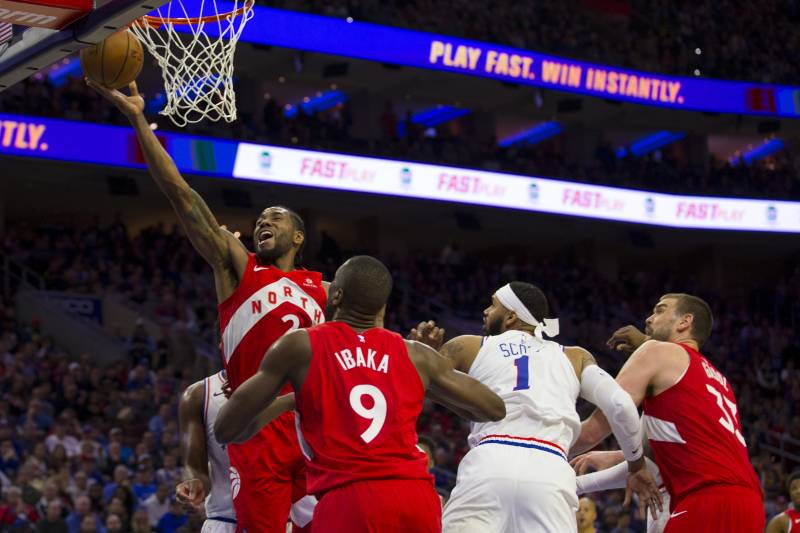 Kawhi Leonard calmly hovered along the perimeter before stepping back behind the arc and letting go of a right wing 3-pointer over the long outstretched arms of Joel Embiid with the shot clock expiring.

Leonard took the Philadelphia 76ers to church on Sunday afternoon, scoring 39 points and snatching 14 rebounds as the Toronto Raptors took back home-court advantage in their Eastern Conference semifinal series following a 101-96 win at Wells Fargo Center.

Leonard, who was 13-of-20 from the floor and came in averaging 37.7 points per game in the series, knocked down his backbreaking triple at the 1:01 mark, which staked the Raptors to a 94-90 advantage. Tobias Harris was unable to convert an open 3-point attempt from the left corner at the other end and the Raptors sealed the outcome with free throws in the closing seconds.

🖐️ @kawhileonard drops 22 of his 39 PTS in the 2nd half, sparking the @Raptors Game 4 road W! #WeTheNorth #NBAPlayoffs

It was a game that was there for the taking for Philadelphia, but it was without a 100 percent Embiid, who was battling an illness and was limited to 11 points on 2-of-7 shooting. Whether it’s been gastroenteritis or his knee issues against Brooklyn, the big man can’t seem to catch a break with his health. He slugged his way around the floor Sunday and missed three critical free throws in a row early in the fourth quarter.

brett brown on embiid: "I got a text from him at 6:20 am this morning telling me he didnt sleep all night, he's never felt this poorly and he wasn't sure if he was even gonna play" pic.twitter.com/ESpe2WzrDk

Jimmy Butler rose to the occasion again, pouring in 29 points on 9-of-18 shooting to go with nine boards. He’s been the one player that the Sixers have been able to consistently bank on this series.

JIMMY BUTLER ARE YOU SERIOUS pic.twitter.com/xp6US5gWOq

Butler, who was already being serenaded with “Jimmy Butler” chants due to his hustle plays and offensive rebounding, got the raucous crowd even rowdier following that banker and this defense on Leonard.

does jimmy butler have you a little RATTLED, kawhi? pic.twitter.com/NWU6WMib6r

It was a struggle for Harris, however, as he was 7-of-23 from the field and just 2-of-13 from behind the arc. He had plenty of open looks, but just wasn’t able to knock them down. J.J. Redick, who netted 19, hit a clutch left wing trey just prior to Leonard’s huge shot.

Pascal Siakam was doubtful coming in with a calf injury, but did play 29 minutes, albeit ineffectively. He scored nine points on 2-of-10 efficiency. The trio of Kyle Lowry, Marc Gasol and Serge Ibake carried the slack, though, combining for 42 points after being held to 23 combined points on average per game in the semis heading into Sunday’s contest.

The Raptors were still inept from beyond the arc, finishing 10-of-31 (32.3 percent), but were able to even things out on the glass 43-43 after being badly out-rebounded the first three games.

Game 5 is Tuesday night in Toronto.