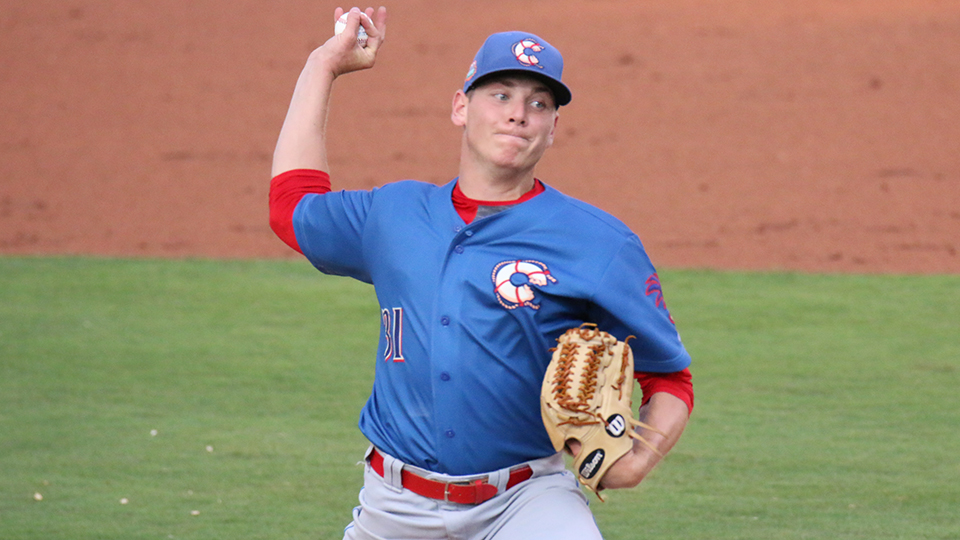 Introducing our monthly minor league report. On or around the first day of each month, I will pay some much needed attention to our Phillies of the future. We will be highlighting Phillies prospects from all throughout the organization, from Lakewood to Lehigh Valley.

Alec Bohm (3B):
On April 29, Bohm, the Phillies’ first-round pick in 2018, was promoted from the Lakewood BlueClaws (A) to the Clearwater Threshers (Advanced A). He absolutely mashed at Lakewood in his 22 games with the BlueClaws. He led the club in homers (3), RBIs (11), batting average (.367), slugging percentage (.595), OPS (1.036) and total bases (47), among other things. Many people believed Bohm should have begun the season with the Threshers; now he has that opportunity. He went 2-for-4 in his Clearwater debut on April 30.

Adam Haseley (OF):
After 39 games in Reading to end the 2018 season, Haseley again finds himself with the Fightin Phils (AA) this year. He has not had a multi-hit game since April 16 and the eighth overall pick in 2017 is currently tied for seventh on the club in RBIs with six, all coming in his last 10 games. His .172 batting average is also near the bottom of the team. However, his .287 career batting average and .415 slugging percentage indicate that this is nothing more than some early season struggles. Defensively, he has not committed an error this season.

Mickey Moniak (OF):
The top overall selection in the 2016 draft has a hit in five of his last six games, but is still only hitting .195 in 19 contests with Reading. He has struck out in 30.1 percent of his plate appearances, which is alarming, but even more so when you factor in that he has only drawn four walks. On the bright side, the 20-year-old outfielder has never topped five homers in a minor league season, but already has two this year.

Luis Garcia (SS):
The 18-year-old shortstop has drawn a lot of eyes since joining the Phillies organization in July of 2017, to the point where he is currently the team’s number four overall prospect. He is off to a mighty slow start with the BlueClaws. His .508 OPS is second-lowest on the club, being dragged down by a lowly .190 batting average. He has been caught stealing in two of his three attempts and has committed a team-high eight errors. I would not sound the alarm just yet.

Madison Stokes (1B):
A bright spot in the Threshers lineup has been Stokes, a 10th-round selection in 2018 out of the University of South Carolina. His .298 batting average ranks third on the team for players with more than seven games played. He also leads the team in homers (3) and is second with 13 RBIs. He has shown a knack for getting on base throughout his collegiate career and carried that over to the minors, where he is a .299 lifetime hitter. The 6’ 2” right-handed hitter will not be taking Rhys Hoskins’ role at first anytime soon, but is off to a promising start.

Spencer Howard (RHP):
My favorite prospect currently in the Phillies system is Howard, a 2017 second-round selection. The 22-year-old has started 36 games in the minors and is beginning to put it together in 2019 with the Threshers. Through four starts, he is 1-1 with a 2.25 ERA and has struck out a team-leading 30 hitters in an even 20 innings. On April 23, he struck out 11 across 5 2/3 shutout innings in a no-decision. His .366 BAbip suggests that he can be even more dominant as the defense around him shores up. With plus command (only four walks issued) and a power arm, I would not be surprised to see Howard make a real impact in 2021 after a potential cup of coffee next season. He was scheduled to pitch on April 30, but was scratched. As of this writing, it is unknown if a call up to Reading or an injury, among other things, was the reason.

Adonis Medina (RHP):
Most of the Phillies’ future is in Reading, like Medina, or below, which is a good thing considering that the big club’s current roster is young enough to compete for years, but is also in a win-now mindset, meaning that they do not have to rely on their farm at the moment. Letting a player like the 22-year-old Medina, the Phils’ top overall pitching prospect, figure it out down on the farm is a gift that some teams are not afforded. In four April starts, Medina has struggled a bit. He has yet to pitch more than five innings or top four strikeouts. His ERA of 4.82 is a bit inflated by the five earned runs across 3 2/3 innings on April 29, but the stuff is still there. Phillies fans got a taste of it in Spring Training this year. With Medina and Howard at the top of the pitching pool, they will make a major league club, whether they are traded for a big league piece or called up by the Phillies, very happy in the near future.

Cole Irvin (LHP):
Irvin impressed mightily in Spring Training with the big club and is carrying that over to the Lehigh Valley Iron Pigs (AAA). He is 2-0 in five starts, going at least five innings in all of them. Four of those five have been quality starts. His 1.82 ERA leads all Iron Pigs starters, and while he was never a big strikeout pitcher (18 in 29 2/3 IP), he continues to find a way to get out of jams. He does not translate to a top-of-the-rotation starter, but the 16th overall prospect can stabilize the back end of a big league rotation right now, in my opinion. Not only would he give the Phillies a left-handed starter for balance, but he throws strikes. As long as balls are not hit to Cesar Hernandez right now, Irvin is ready for at least a shot at the bigs. The only question is, does he have a spot right now?