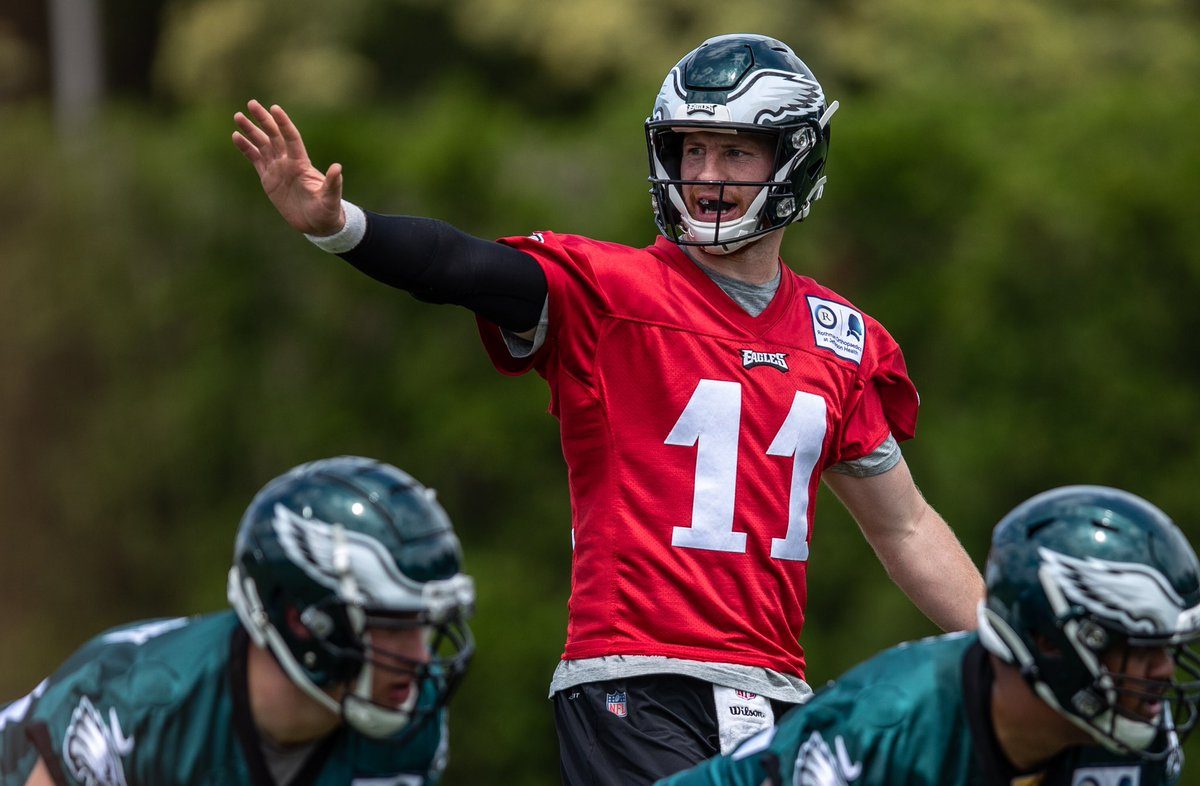 This week marked the beginning and end of mandatory minicamp for the 2019 Philadelphia Eagles. Contrary to reports, Malcolm Jenkins joined the entire team on the field. With all the vets in the building, the work to get better was ramped up. There were great press conferences and insights given by the coaches, players, and organization. Training camp officially begins on Thursday, July 25th. Here is all the action from an exciting and playmaking filled week.

• Malcolm Jenkins, Alshon Jeffrey, Zach Ertz, and plenty of others showed their dominance on the first day of practice.

• The DBs flashed the second day on the field this week. Get in on all of the drills, actions, and TD passes.

• One the final day of practice, it was the offense that seized the day. Watch and listen to the best plays from the team’s final session until July.

• Listen to Doug Pederson express his gratitude for having a 100% attendance rate at practice. He also spoke on injuries and the leadership that Malcolm Jenkins displays each day.

Alshon Jeffrey spoke on the talent in the locker room and how it may surpass the 2017 team. Kamu Grugier-Hill claims he’s ready to put on his show in his beefed-up role on the defense.

• Doug Pederson addresses the improvement and progress being made by the injured players, Carson Wentz’s play, and the connectivity being shown by the team.

Zach Ertz tells reporters what it was like to watch the USWNT’s dominant performance in the world cup, Avonte Maddox talks about training with the San Diego Charger’s Desmond King and more.

• On the last day of practice, Doug Pederson tells reporters that “everything that we do, matters to how we perform.”  The coach also talks about Miles Sanders’ utility after an injured spring and the connection between Carson Wentz and DeSean Jackson.

LB coach Ken Flajole talks about how to utilize Zack Brown in the defense. Secondary coach Cory Undlin gives a preview to the defensive back rotation.

Malcolm Jenkins speaks about his role as a leader on the team and the business side of the league. Vinny Curry speaks on his projected impact in the defense in the lineup. Dallas Goedert believes the Eagles TE duo can be a matchup nightmare for the rest of the NFL. 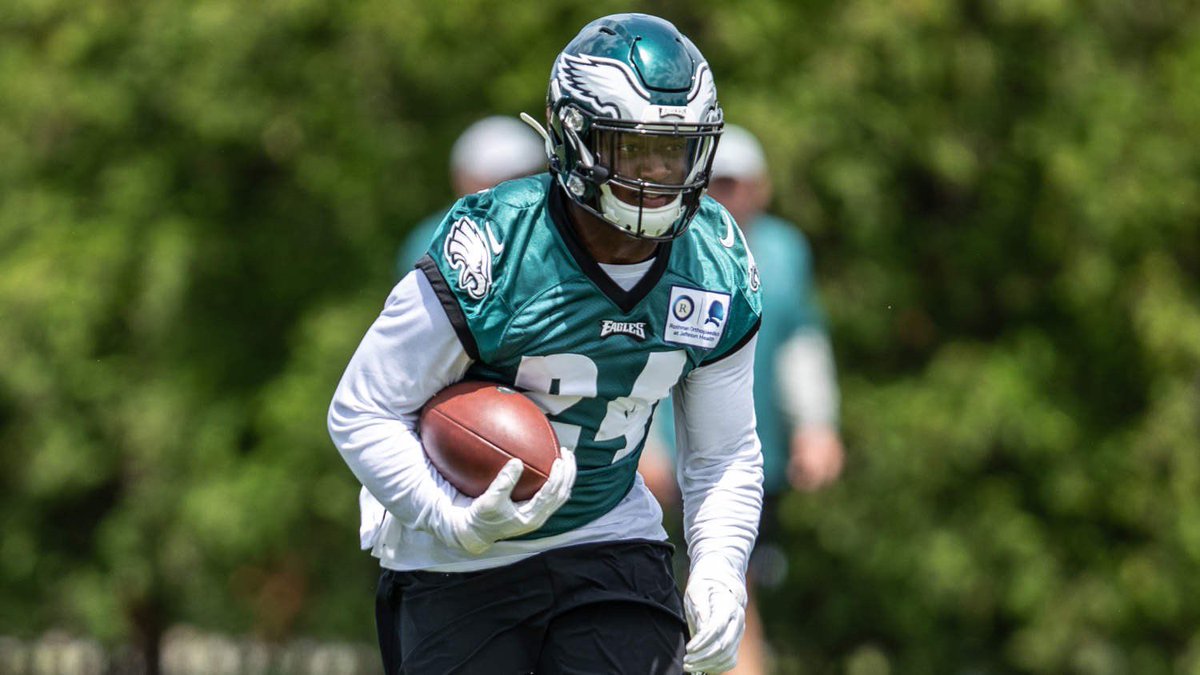 • Carson Wentz hit TD passes to Dallas Goedert and JJ Arcega-Whiteside. He had a crisp afternoon with deep passes. He hit Sony Michel’s brother, Marken Michel, off a flea flicker for a 30-yard pass. JJ Arcega-Whiteside continues to impress with great hands and a few drops.

• Mack Hollins showed his face on the sideline first time in the offseason. Alshon Jeffrey shoved off Sidney Jones when running a route. The big-time WR was flagged for offensive pass interference but the act of Jones being tossed aside couldn’t be good for his confidence.

• Nelson Agholor continues to miss practices due to a lower-body injury. Greg Ward and Marken Michel continue to see time there. Donnel Pumphrey is also seeing a lot of action.

• Andre Dillard continued to get first-team reps even with the return of Jason Peters.

• Josh Sweat’s had enough speed to chase down Donnel Pumphrey about 45 yards down the field. Sweat has never lacked for speed in athleticism at his time at FSU. 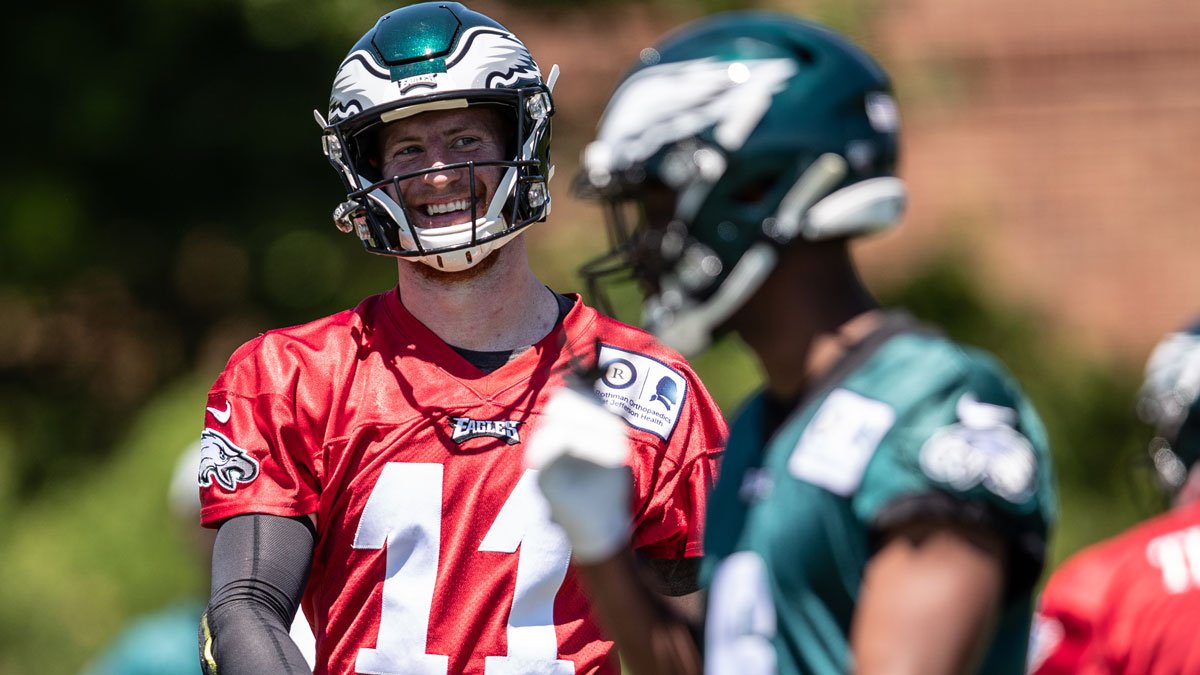 • Carson Wentz hit DeSean Jackson deep down the field for a 50-yard bomb. The connection between Wentz and Jackson has been on fire this spring. They’re going to tear up the league this year. Jackson also had his first miss of camp and promptly did pushups afterward. Wentz also hit Smallwood and Ertz for TDs passes.

• Marken Michel continues his assault on the end zone. He turned on the burners on the corner route on day-two. The CFL roster addition is definitely a bubble player to watch.

• Avonte Maddox picked off Carson Wentz on a phenomenal leaping play. His name constantly comes up each day of practice.

Bold take: Avonte Maddox is the best CB on the #Eagles right now. Amazing coverage skills. He’s going to be Brent Grimes. People will keep talking about his size right up until they realize he’s the best option

• Sidney Jones is the odd man out when the Eagles go to nickel packages and three-safety looks. 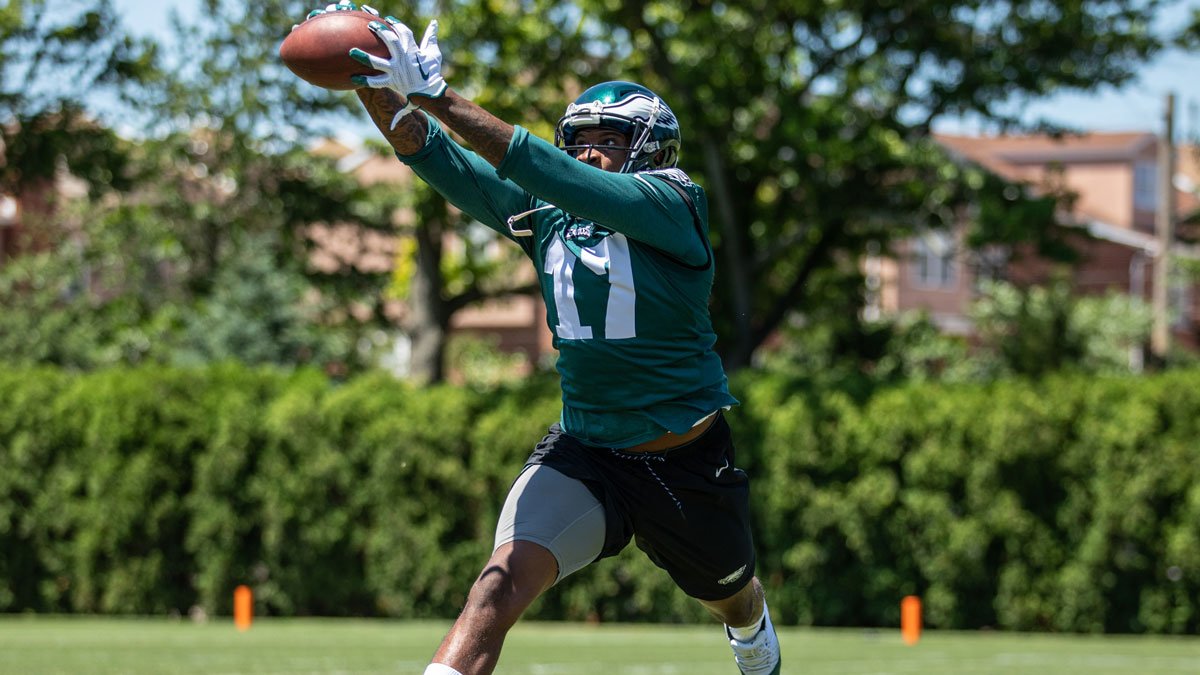 •  The practice was a short 24 minute period.

• Carson Wentz continued his dominant minicamp on the last day of practice. The newly-minted QB really is putting it all together this spring.

Carson Wentz throws to a leaping Charles Johnson in the back of the end zone, who makes the grab. (Jim Schwartz signaled for a TD so you know it was legit.) Wentz has looked real sharp in the red zone this spring. #Eagles

• Desean Jackson had a rest day so several other reserve WRs stepped up in his and Nelson Agholor’s absence. Red Zone was worked on throughout practice. This was something the Eagles excelled at in 2017. They’ll look to get back to that trend in the 2019 season.

• Nate Sudfeld made a beautiful throw to Carlton Agudosi for a diving TD. 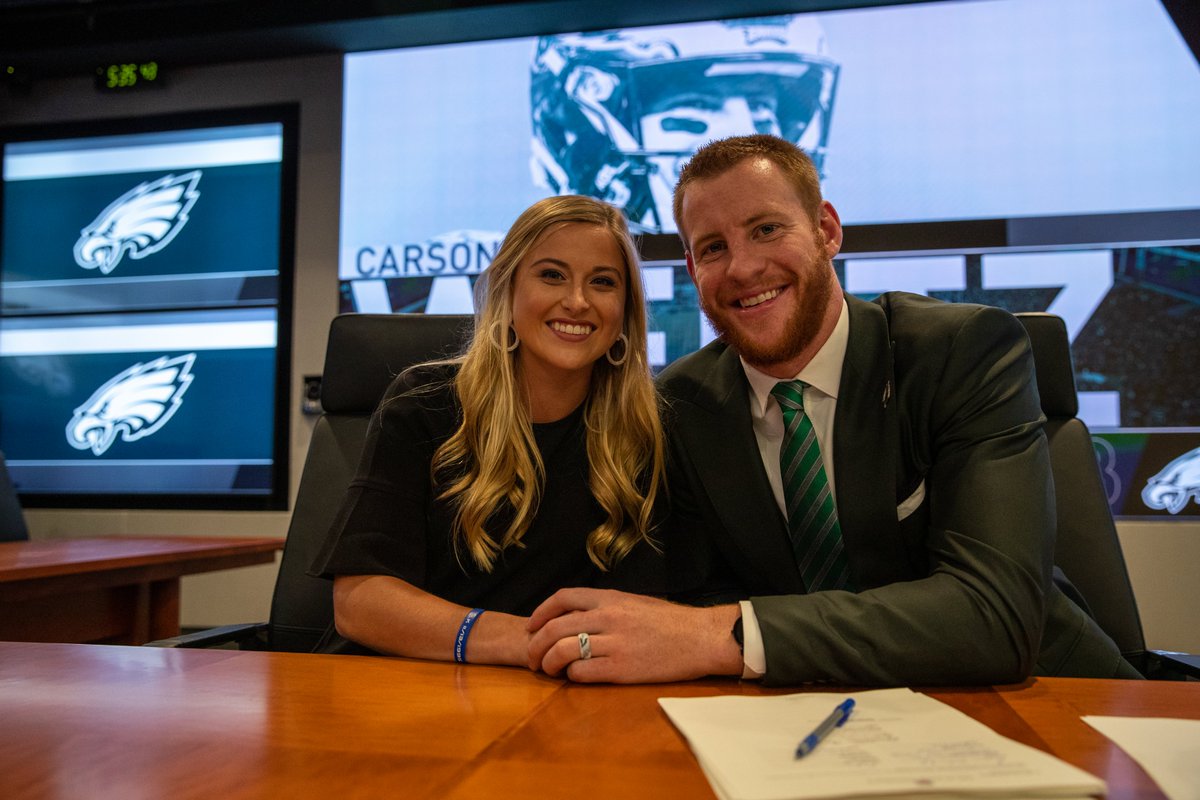 • Carson Wentz’s Contract: The biggest news of the week was the Carson Wentz press conference on Monday. The banner 128-million contract extension left Wentz feeling grateful and ready for the future.

Here’s exactly what Doug Pederson had to say about #Eagles spring standouts: pic.twitter.com/IoXITW6qXW

• Eagles Medical Staff: The Philadelphia Eagles reportedly made another change to the medical staff this week. Arsh Dhanota, the medical director of non-operative sports medicine at Penn Medicine, has will now be the chief medical officer. “He will oversee the entire medical staff and be responsible for streamlining communication throughout all departments”. Head team physician, Stephen A. Stache, has been let go after just a year with the organization.

• Scouting Department Hire: The team has hired Andy Weidl to the VP of player personnel. This an internal hire so the transition should be seamless.

• Rodney McLeod: Rodney McLeod stated his injury was a “humbling experience” to reporters this week. The safety re-worked his contract in the early offseason.

“It was a humbling experience, I will say that. You never see what goes on day to day with these injuries that a lot of guys face, even guys like Carson (Wentz), Chris Maragos, all the guys that experience ACL injuries, Jason Peters. I leaned on those guys for advice, but I didn’t really know what that was going to entail until I experienced it. I got a greater deal of respect for those guys to see them battle back and see them perform the way that they have. It’s pretty remarkable. I’m hoping to do the same. Just excited to be back out there.”

• Malcolm Jenkins:  Malcolm Jenkins told reporters that he believes he’s outplayed his contract. As one of the leaders of the team, he feels confident that the organization will get something worked out.

• Pay Dak!: One of the best things to come out of the Carson Wentz’s deal is the pressure it puts on the Dallas Cowboys to pay Dak Prescott. Let’s hope he squeezes every scent from the hated franchise and sends its salary cap into turmoil.

Dak’s agent has “broached a deal” in the $34M range annually, per @clarencehilljr pic.twitter.com/s9XoCHTNkx

• Wentz Contract Breakdown:  Joe Banner brokedown the benefits of Carson Wentz’s contract on the salary cap this week. He alleges that we got the young ace QB for a steal.

It was media day for the team on Monday. Head to the team’s social media pages to so the best of the photoshoots this week.

With a record of 3-1, your new locker room rock-paper-scissors champion is @Strap_Ent!#FlyEaglesFly pic.twitter.com/aY9Xw0Dolr

Carson Wentz took the wide receivers out to dinner this week. Hennessey and Loius XIII were flowing at the table.

Howie Roseman sat down with Rich Eisen this week to speak on Wentz’s contract and how he goes about building a team.