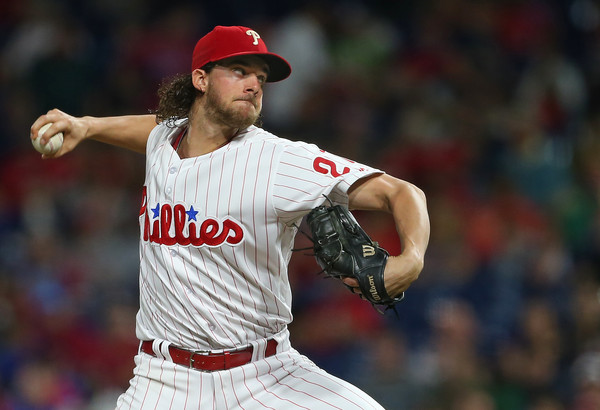 Weird enough, the best game of the series for the Phillies was when Gabe Kapler decided to utilize an opener. Then the next game the bullpen surrendered all eight runs in a crushing 8-0 defeat. The differences of the two games I think perfectly captures the current state of the Phillies bullpen. There are some quality arms in the bullpen, which are good enough to pitch nine strong innings against a good lineup. However, if used enough the lack of depth can become exposed.

The solution isn’t on the roster currently for the Phillies. Bullpen help needs to come in the form of free agency, specifically Craig Kimbrel, or a trade. While the series against the Dodgers exposed the bullpen, it also shows the need for the Phillies to acquire another quality starting pitcher. There have been too many times this season that the Phillies have had to turn to its bullpen early in games. It’s at a point now where the Phillies don’t even have a fifth starter to rely on, so that duty is turned over to the pen.

The sweep is proof that if the Phillies want to go deep into the playoffs in 2019, they need to bring in pitching help.

While the Phillies will be in the market for pitching this summer, the front office has already made one move. Jay Bruce is now joining the Phillies after a trade with the Seattle Mariners. For details on the trade, here is a story posted earlier at Pi by Greg Hall.

Bruce brings some much-needed depth to the Phillies roster. There have been some disappointments this season off the bench, including Nick Williams. Of course what Bruce adds to this roster is his home run potential, as the left-handed slugger has 14 home runs this season.

There are a few things to watch with Bruce as he makes his first starts in a Phillies uniform. Although Bruce has a .212 average this season, that doesn’t tell the story of his past 28 games, in which he has .281 average and a .905 OPS. In the last 14 games, he has posted a 1.150 OPS.

Where the Phillies need most with Bruce is the ability to hit right handed pitching. The Phillies average dips down to .238 against right-handed pitching, compared to the team’s .257 average against lefty pitchers. Before the addition of Bruce, the only left-handed hitters in the Phillies starting lineup were Bryce Harper and Odbuel Herrera. With Herrera most likely on his way out, that just leaves Harper and he has been significantly worse against RHP.

It may not be the acquisition that puts the Phillies over-the-top in the National League, but it does help with a needs that the Phillies have offensively. That being a power-hitter and another left-handed bat in the lineup. We’ll see if he can make an early impact in the Phillies lineup at a time where it is much needed.

Game 1:
Eric Lauer – o/u 4.5 strikeouts – At times Lauer has showed strikeout potential, but not lately. UNDER

Aaron Nola – o/u 6.5 strikeouts – The Padres have the third most strikeouts this season with 581 Ks. Nola has been pitching better lately, which has resulted in more strikeouts. OVER

Total – o/u 7.5 – The Padres offense isn’t imposing and were shutout in its last game. Pair that with the pitching match up and there is no wonder why the run total is low. But the Phillies offense is never down for long and the Phillies bullpen could certainly surrender a few runs. OVER

There aren’t many games on tonight’s late slate and the best pitcher on the slate by far is Aaron Nola. Nola has the best match up and is worth the price.

Teams will now be able to sign Craig Kimbrel and Dallas Keuchel without forfeiting a draft pick. The two pitchers are expected to sign to a team sometime this week and the Phillies have been linked to both. While the Phillies have a need for a reliever and starting pitcher, I still do not expect the Phillies to sign either of the two.

The demands from both free agents are likely to change as we are now almost halfway through the season. However, the price for the two will still be high and there are teams willing to pay that price, without having to forfeit a draft pick or sign them to a long-term deal. The Phillies may have some money to spend, but the “stupid money” has already been spent. There are decisions that need to be made soon and players on the current roster that will need a long-term deal soon, like Rhys Hoskins. I just don’t think the Phillies are willing to spend the amount of money needed to sign Kimbrel or Keuchel.

It’s more likely that the Phillies will get the help they need via a trade or two. Matt Klentak has already made the first move this season and there are sure to be more before the trade deadline.