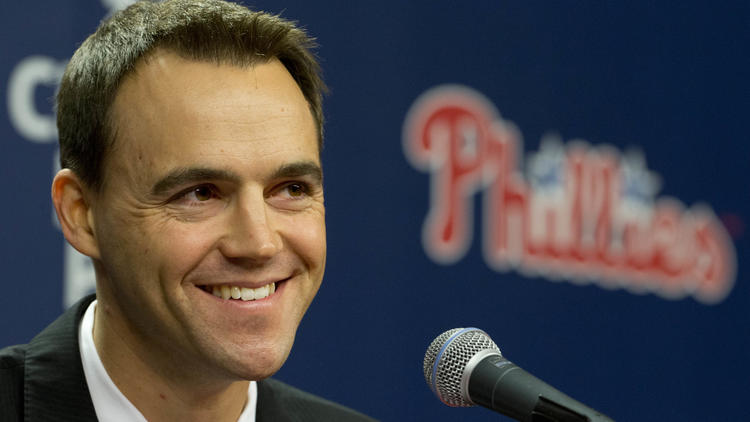 At the All-Star break the Philadelphia Phillies sit 6.5 games behind the Atlanta Braves and are third place in the National League standings. That is disappointing considering where the team stood at the start of June. In June, and the start of July, the Phillies were exposed and are now well aware of the concerns that face this team for the rest of the season. It all wasn’t bad though, as the Phillies do have very good pieces that can help them to a division title this season. Here is all the good and bad from the first half of the season and what’s next for the Phils in 2019.
The Good

The start to the 2019 season was concerning for what was one of the top pitchers in all of baseball last season. Nola’s stumble out of the gate then took shape over a couple months instead of a couple of weeks. It was especially concerning because Nola is the one player the Phillies can’t afford to have under perform. He is maybe the most important piece to this team, considering that there is not much starting pitching depth behind him.

It especially looked bleak when Nola surrendered five runs in just 4.1 innings to the Braves. The Phillies eventually went on to win that game, but Nola’s ERA rose to a 4.89. Just when it seemed like he wouldn’t be the ace that we thought, he quickly changed that narrative. Since June 21st Nola has started in four games, has allowed only two runs and struck out 34 batters in 29.2 innings pitched. If Nola continues to pitch that well for the rest of the season that significantly betters the Phillies chances of making a strong run to overtake the top spot in the division.

This may not be a shared opinion, but Bryce Harper had a really solid first half of the season. I know, there have been some base running blunders, mishaps in right field and at times atrocious numbers at the dish. However, because of the attention he receives, I think we tend to focus on the few mistakes while looking past the many positives.

Usually tagging a player with the ‘hustle’ trait is considered good, if we don’t think of them having much talent. But let’s give Harper credit here, he is not settling for just average play. Harper legitimately does not take a play off, does not ever slow trot to first base, pass up on a fly ball or lose focus at the plate. Sometimes that has hurt Harper, especially when running bases, but that is eventually going to get rewarded. There have been so many times Harper has tried to extend another base only to be thrown out on a perfect throw. It happens. Eventually the aggressive base running will pay off and I hope he continues to be aggressive.

One of the major concerns with Harper was the rising rate of strikeouts this season. In March and May, Harper led the league in strikeouts, but the strikeout rate has gone down since June. He struck out 38 times in April/March and again in May. Then in June he went down to just 25 strikeouts. Couple that with the fact that Harper’s OPS is 1.008 during the last week of the first half, and .936 in the last two weeks, and it’s clear that Harper has been seeing the ball much better. Harper has improved in the last month and I wouldn’t be surprised if we see a batting average near .270 by the end of the season with 30+ home runs and 100+ RBI.

While the bullpen as a whole continues to hold the Phillies back this season, Neris continues to be the best and most consistent option for the Phils in 2019. Neris has been relied on heavily in the first half and for good reason, as he has converted 17 of 19 save opportunities. If it wasn’t for Neris, the outlook for the Phillies would be much worse than it is now. Neris not only saved 17 games, but may have saved the Phillies from a complete collapse in the first half of the 2019 season.

There is no way around it, Matt Klentak needs to find a way to bolster the pen. If not, this season will end much sooner than expected for the Phillies. The problem right now is that the Gabe Kapler and the Phillies continually have to send out mediocre relievers each game. Juan Nicasio has appeared in 32 games this season, which is the third most on the team, all while his ERA sits at 5.24. Edgar Garcia has taken the mound 24 times this season and has a 6.08 ERA. Jose Alvarez hasn’t been terrible in his 35 games this season, but he is an average reliever and should not be the second most used pitcher out of the bullpen.

Can the bullpen get better? Absolutely. While a bullpen arm addition is necessary, the Phillies also have quality arms returning from injury. Adam Morgan returned before the All-Star break. David Robertson should return sometime near the end of July. Seranthony Dominguez luckily avoided surgery and could return sometime in July. Those there are quality pitchers and their returns will improve the bullpen significantly.

It would’ve been easy to include the entire starting rotation here, but I’ve already put the entire bullpen on this list. I don’t think the entire pitching staff needs to blamed for a disappointing first half. Instead I think the most disappointing player on the 2019 roster needs to be singled out, and that is Nick Pivetta.

Phillies fans had high hopes for Pivetta this season. His numbers on the surface weren’t anything great, but there were some underlying numbers for Pivetta that implied there would be significant improvement. To be honest, it wasn’t just Phillies fans that thought this, everyone did. Teams inquired about trading for Pivetta in the offseason in anticipation of a breakout season. Fantasy analysts were touting Pivetta to be a dark horse starting pitcher in 2019. Analysts on major networks were all calling for a breakout season for the 24-year old. Perhaps the most important evaluations came within the Phillies organization, where the entire organization wasn’t just hoping, but extremely confident, that Pivetta would be a significant part of the starting rotation. Everyone was wrong.

The Phillies can’t afford to keep Pivetta in the rotation any longer. Starting pitching help needs to come now, not in a few weeks. #Phillies

Pivetta was sent down to Triple-A in mid-April, returned to have some success in May, only to be torched again in his last four starts. The Phillies need to replace Pivetta ASAP.

For the Phillies, it’s pretty clear what holes the team needs to fill in order to make a run for the division. There needs to be another quality arm added in both the bullpen and starting rotation, especially after possibly losing Jake Arrieta for the season. That responsibility rests solely on the shoulders of Klentak. After spending big in the offseason, he has been reluctant to make any other additions. While Jay Bruce has been an excellent addition to the roster, it wasn’t a move where the Phillies had to give up much. The problem for Klentak is that the Phillies don’t have many valuable assets to trade and figuring how much the Phillies are willing to give up in a trade. With the limited amount of trade material, the Phillies may need to go all-in on a trade. Are they willing and able to do so? The 2019 season may depend on Klentak’s answer to that question.