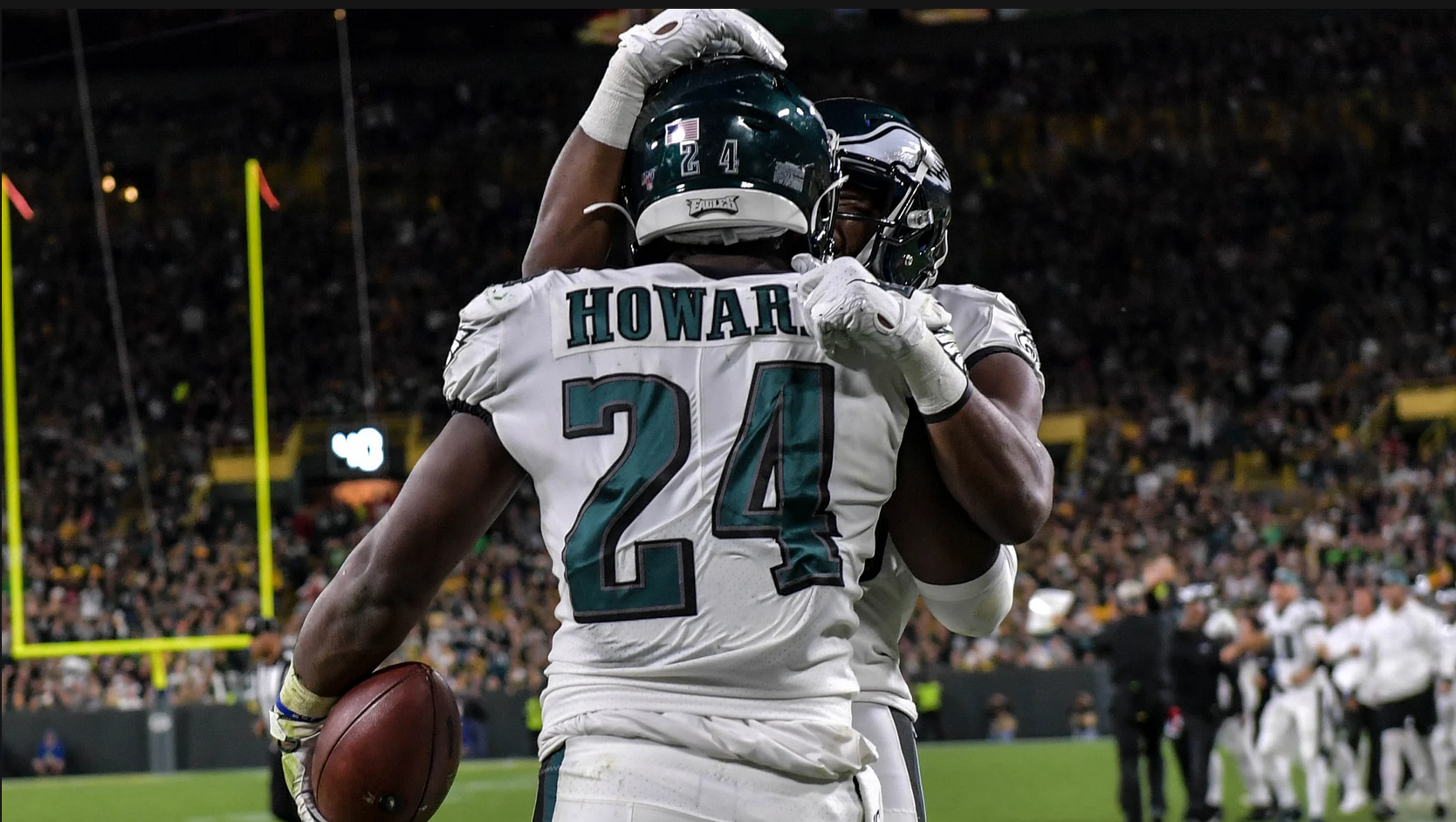 The underdogs could be poised to go on a run.

And speaking of runs, the Eagles had a serious case of it as they pounded the Green Bay Packers on the ground en route to a stunning 34-27 win on Thursday Night at Lambeau Field.

From undrafted to the Eagles practice squad to being thrust into live action, Craig James made the key play to preserve the victory in the final minute. He jumped Marquez Valdez-Scantling’s quick slant, popping the ball into the air for Nigel Bradham to retrieve and improve the Eagles’ record to 2-2.

An inconsistent Eagles offensive line the first three weeks obliterated the Packers front seven, overpowering them and creating gaping holes for Jordan Howard and Miles Sanders to run through all night. Howard had three total touchdowns, carrying the ball 15 times for 87 yards and two touchdowns while also adding a touchdown r, while Sanders added 72 yards on 11 totes. Philly ran for 176 yards total and averaged a healthy 5.3 yards per carry.

Wentz with his third touchdown of the night!#PHIvsGB | #FlyEaglesFly pic.twitter.com/5Hf9Xm3ir9

Green Bay’s pass rush featuring Preston Smith and Za’Darius Smith coupled with cornerback Jaire Alexander and safety Adrian Amos on the backend has made the defense look dominant. The Packers did, however, have a weakness in stopping the run and the Birds exploited it.

While the Packers’ run defense came in ranking 25th, the Eagles hadn’t established their ground attack until Thursday, averaging a measly 3.6 yards per carry coming in. Sanders headed in below three at 2.9 yards per tote.

Sanders’ 67-yard kickoff return after the Eagles fell behind 10-0 was the spark they needed. Philadelphia scored touchdowns on four straight possessions (excluding the kneeldown at the end of the first half) after not recording a point in the first quarter for the third time in four games. They went down the field without much resistance either.

Those four scores gave the Eagles a 27-20 cushion at the 9:12 mark of the third quarter, but the Packers answered back with a 14-yard score from Aaron Rodgers to Jimmy Graham, knotting the contest at 27-27 late in the third. Howard’s two-yard TD plunge put the Eagles back in front for good early in the fourth.

Not only did the Eagles force the late Bradham interception, the defense also stepped up in the red zone, stopping the Packers four times straight from the 1-yard line.

Philly stuffed Green Bay’s rushing attack, limiting Aaron Jones to 21 yards on 13 carries, but Rodgers put the ball up 53 times, completing 34 of them for 422 yards with a touchdown and interception. Although the Eagles sacked him just once, Derek Barnett got around the edge on a strip sack, the pressure was a lot more consistent from the front four than it had been in previous weeks.

Wentz tossed three touchdowns despite not throwing for over 200 yards, he didn’t need to. The ground game dominated. Wentz finished 16-of-27 for 163 yards.

Davante Adams torched the Eagles secondary, which was already without Ronald Darby due to a hamstring injury and lost Sidney Jones and Avonte Maddox during the game. Adams caught 10 balls for 180 yards before exiting with a foot injury. Maddox suffered a serious injury following a scary collision with Andrew Sendejo.

The Eagles announced after the game the Maddox had movement in all of his extremities.

Avonte Maddox has movement in all extremities. For precautionary reasons he has been sent to the hospital for further evaluation.

Now that the short week is over, the Eagles can kick their feet up this Sunday while the rest of the of league takes the field. They’ll have some extra days off before heading to East Rutherford to take on the Jets.