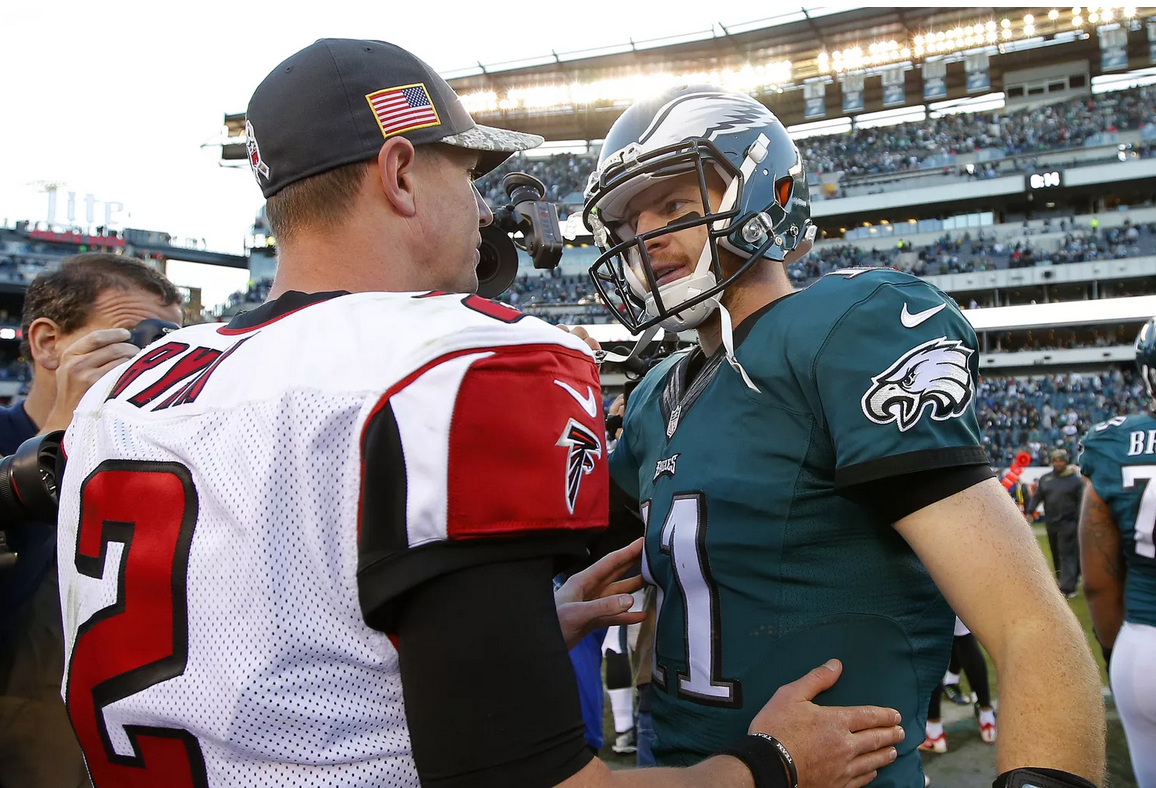 Doug Pederson is 3-0 in his career against the Atlanta Falcons, but also 1-2 in Week 2 games.

What’s going to give as the Philadelphia Eagles travel to Atlanta to take on the Falcons?

The King of 3rd Down is back!

Carson Wentz was 12-of-13 for 197 yards and three touchdowns on that particular down and distance on Sunday. Two of those conversions went to DeSean Jackson, who caught eight balls for 154 yards and two scores in his Philadelphia homecoming.

A weakness in Wentz’s game over the last couple seasons has been the trajectory on his deep ball, the complaint is that sometimes he throws it a little flat. There was nothing flat about this particular pass when Wentz hooked up with Jackson for the first time. Jackson got late separation because he got stacked on Josh Norman and Wentz dropped it right into his lap.

Pederson commented on the rapport Wentz and Jackson are building.

I just think these two guys have really worked on it not only in practice, but after, throwing those deep balls. That’s really what it comes down to.

If they miss in practice, they’re going to spend some time afterwards and get another two or three throws at that ball. That’s something that [QB] Carson [Wentz] I think is learning with [WR] DeSean [Jackson], and the speed, just being able to put the ball up and out there and let him go get it.

How about Jackson’s speed.

It’s a different speed. [WR] DeSean [Jackson] will tell you, he’s got practice speed and he’s got game speed. Practice speed is around 16 miles per hour and game speed is up to 22. He’s a gamer. He’s dynamic, he’s electric, and he loves when the lights come on. That speed is real, and we saw it Sunday.

But the third downs don’t stop there, how about the touchdown to Alshon Jeffery on 3rd-and-goal? Wentz did a tremendous job of scrambling to his right before firing a dime to Jeffery on the move for the score.

Wentz evades the pressure and delivers a dime to Jeffery!#WASvsPHI | #FlyEaglesFly pic.twitter.com/qXqeORs3Ai

One more for you. Wentz moved the chains on a pair of third-and-longs in the fourth quarter. He was flushed to his left on each occasion before calmly scanning the field and finding his targets along the left sideline. This dart to Zach Ertz was a thing of beauty.

With Norman historically getting the better of Jeffery, the Eagles capitalized on the matchup of Jackson going against Quinton Dunbar. This Sunday it might be Jeffery who has the more favorable matchup. Jackson will line up on Desmond Trufant, who in my opinion is a top-10 corner in the game. Isaiah Oliver will have the task of stopping Jeffery on the other side, advantage Jeffery.

An adjustment we saw in the second half from Pederson Sunday, Ertz and Dallas Goedert were seen on the field together more after being on the field at the same time just twice in the first half.

Since the calf, he (Goedert) was another one that we kind of had our eye on from the standpoint of maximizing his reps during the game. Those were some of the adjustments we made at halftime as a staff and getting those guys on the field a little bit more in the second half.

But overall, he did well. Gosh, I would love to see him pull down that ball on the sideline that he had. We’re going to continue to get him in the mix. I think it’s dynamic when these two are in the game together obviously, but overall, he played well.

There’s not much to worry about in terms of an Atlanta pass rush. Vic Beasley put up 15 1/2 sacks in 2016, but has combined for just 10 the last two years. Tak McKinley is their best pass rusher.

I was surprised by how many touches Darren Sproles received in Week 1, but we really shouldn’t have been surprised. He carried the ball nine times for 47 yards (5.2 YPC) and registered 16 touches, Jordan Howard totaled 44 yards on six rushes (7.3 YPC) and Miles Sanders toted the rock 11 times for 25 yards.

The overwhelming majority want to see Howard get more carries, but this was exactly how I thought he was going to be incorporated into the offense. I viewed Howard playing the LeGarratte Blount role, pounding the ball on 3rd-and-shorts and in the fourth quarter when you’re ahead and trying to churn clock. I was never expecting him to be the bell cow and receiving 20-plus carries a contest.

I don’t have a problem with using Sproles, my issue has more to do with him being 36 years old and last Sunday being Week 1 of 17. He needs to be fresh come December and when it really matters come postseason time. Here were Pederson’s thoughts on Sproles’ touches in Week 1.

“Yeah, we always are going to monitor that each week. Kind of going back on that it’s again, kind of how our game plan fell with the running backs a little bit. We still want to keep him involved as best we can, but at the same time we want to make sure that [RB] Miles [Sanders] and [RB] Jordan [Howard], because they’re both younger backs and can — are good and keep that rotation solid, along with [RB] Corey [Clement].”

Had Sanders’ long TD run not been called back for a hold, his numbers would’ve looked better.

Atlanta, though, struggled to stop Minnesota’s rushing attack in Week 1. Kirk Cousins only had to put the ball up 10 times because Cook gained 111 yards on 21 carries.

Matt Ryan has a career 73.5 passer rating in Atlanta’s three losses to the Eagles during Pederson’s tenure.

Yeah, I think, one, we have been fortunate to have all those games here since I’ve been here, they’ve been home games for us. They’re a different team obviously when they’re playing at home in front of their crowd. He’s very dynamic and electric and they do some great things in that dome (Mercedes-Benz Stadium).

I think there is something to the fact — and he’s a great quarterback. I love watching Matt Ryan, I’ve been following his career and everything. For him, too, it’s coming back home and playing in front of family and friends and relatives and stuff when he comes here.

But our guys just — I don’t want to say they play differently — but they just get after him and they put pressure on him. Any time you do that to quarterbacks and disrupt their timing, you can cause turnovers, incomplete passes, move him off his spot, whatever it is, and we have been able to do that.

So now it’s going to be a challenge down there, loud place, trying to do it again.

That is going to be the challenge because the Eagles barely touched Case Keenum last week. Despite the Redskins starting Ereck Flowers at left guard and backup Donald Penn at left tackle, the Eagles posted just one sack. Derek Barnett had three hurries, while the combination of Brandon Graham, Vinny Curry and Josh Sweat didn’t even get one.

Philly is going to be seeing another weak offensive line in Week 2. Former right tackle Ryan Schraeder left as a free agent during the offseason and he’s been replaced by first-round rookie Kaleb McGary. Another first-rounder Chris Lindstrom started at left guard, but he was lost to a broken foot. So that means the Falcons are now starting journeyman James Carpenter and Jamon Brown at the guard spots. Even though the Eagles lost Malik Jackson with a Lisfranc injury, they should still be able to capitalize with Timmy Jernigan and Fletcher Cox.

But that’s what we all thought last week too.

Defensive coordinator Jim Schwartz spoke about the lack of pass rush against Washington during his presser Wednesday.

Yeah, you would like to. They were doing a lot of double chipping and I think that really what we needed to do was we needed to cover better to be able to get the pass rush home. Including blitzes, blitzes that block them up, but you have guys that are adding to running backs and adding themselves to the pressure. I think it was more a case of that. Any time somebody takes a max-up approach, which they did an awful lot, they kept a lot of tight ends in, it’s going to be hard to get there on the outside.

The thing I was probably most disappointed in in pass rush was the last series. You have a two-score lead, as long as we don’t do something stupid, we’re going to win the game — by doing something stupid I mean a ball over our head, so keep it in front, let them bleed the clock. But those are good chances to get rush and I think at that point you saw it was first game for us and a lot of guys were playing their first game of the year and our conditioning probably wasn’t where it can be and where it will be and there were opportunities to make some plays there because there we weren’t getting all those heavy play actions and heavy double chips. We can do better certainly in pass rush but I think in coverage we can make the quarterback hold the ball a little longer and buy time for our guys to get home.

What about the cornerbacks?

I think you have a tendency when you give up a play to get a little less aggressive in coverage and then we gave up some underneath things. But there was a lot of different things. Overall, we just didn’t, particularly in that first half, didn’t have a lot of sync. Our zones weren’t good, our man wasn’t good, our blitz wasn’t good — we were still stopping the run pretty good — but whether it was a combination of tackling or angles going to the ball or defending deep to short or playing tight coverage, it just didn’t look like us and didn’t look like what we’ll look like.

Pressuring Ryan will be the key to the game because if he has as much time to throw as Keenum did last week, it will be an extremely long night for the Eagles’ cornerbacks, who have to combat with Julio Jones, Calvin Ridley and Mohamed Sanu along with tight end Austin Hooper. Atlanta likes to use deep play-action and attack the intermediate range with Jones and Ridley.

The Eagles limited Derrius Guice to just 18 yards on 10 carries Sunday, while DeVonta Freeman had just 19 yards on eight rushes last week against Minnesota. The Falcons got down 14-0 early and had to throw the ball the rest of the game, so the rushing attack never had a chance to get going.

Freeman is an agile slasher with good vision. Ito Smith, who had six carries for 31 yards in the opener, took over for Tevin Coleman as the backup and can catch passes out of the backfield.

Atlanta finished 27th in the NFL in rushing a year ago.

PREDICTION: I didn’t like what I saw out of Philadelphia’s pass rush in Week 1 and it’s the biggest reason for the secondary’s problems. Week 2 for whatever reasons always gives the Eagles fits. I think the Falcons start hot, the Eagles battle back, but fall short in the end.