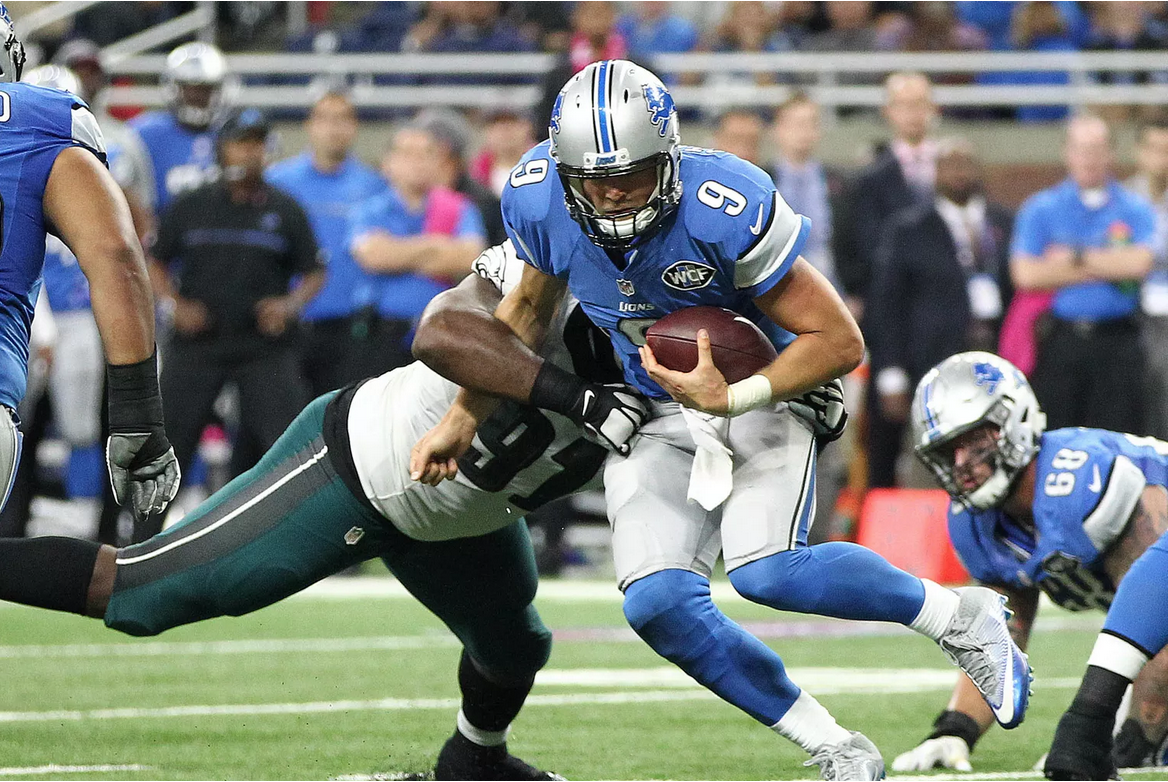 The Philadelphia Eagles are dealing with a plethora of injuries, but they still have the Lion King and that’s Carson Wentz.

The Detroit Lions roll into Lincoln Financial Field Sunday looking to play spoiler following a 13-10 victory over the Los Angeles Chargers last week. Will they be able to capitalize on the Eagles’ injuries and pull of an upset, or will Philadelphia overcome the adversity and prevail?

DeSean Jackson is out with a groin strain, that is a definite, but Eagles head coach Doug Pederson threw a curveball Friday and said during his press conference it is possible that both Alshon Jeffery and Dallas Goedert could play. Both have calf strains, Goedert was ruled out Sunday prior to the game and Jeffery played just six snaps.

Pederson isn’t concerned about the Eagles’ ability to stretch Detroit’s defense with Jackson ruled out.

“I mean, we saw [WR] Nelson [Agholor] the other night be able to stretch the defense. He obviously can do that. And if that’s the case, then we have to get creative and be able to find some ways to get these guys down the field. This is a good defense we’re playing. It’s a good pass rush. It’s a lot of man coverage, as we know. A lot of the New England Patriots type of schemes, what you see on tape with [Lions Head Coach Matt] Patricia there. We just have to find unique ways and creative ways to push the ball down the field.”

But how will the Eagles move the ball if Jeffery and Goedert can’t play?

I got the answer.

The Lions have allowed 14 receptions for 130 yards to running backs so far through two games, that’s tied for fourth worst in the NFL. I’m looking at Darren Sproles and Miles Sanders getting involved in the passing game, expect a lot of screens and routes coming out of the backfield from these two.

The Eagles still have Zach Ertz, who is essentially a No. 1 receiver playing tight end. Detroit, however, has surrendered just three catches for 29 yards over two contests, which is second in the NFL. Ertz has 13 receptions for 126 yards through two games. What gives?

There’s also Nelson Agholor, who seems to be flying under the radar through all of this following his drop Sunday. Despite his miscue, which would’ve resulted into a touchdown and may have helped the Eagles win the game, snagged eight balls for 107 yards and a touchdown. If he plays outside like I expect him to, it’s going to be a tough matchup since Darius Slay will be matched up against him.

If Slay shuts Agholor down, will Mack Hollins and J.J. Arcega-Whiteside step up?

Philadelphia was so banged up from Sunday’s game that it didn’t practice Wednesday, instead holding a walk-through.

“It’s just a couple things,” Pederson said. “Number one, with the guys that are a little nicked up who have a chance to play in this football game, I want them to get the rep in practice. Normally we go a padded day. Then two, we have some young guys that might have to play, and they’re also servicing the defense or the offense, and so this way it allows everybody to still practice and maintain their focus and get our work done that we need to get done today.”

Pederson wants everyone as healthy as possible the next two weeks with the Eagles playing again Thursday in Green Bay.

“That’s another reason to kind of pull back just a touch. I want these guys as fresh as possible obviously for these next two weeks. I have to think of the big picture here, obviously, and keeping guys — it’s early in our season, keeping guys as fresh as possible now so we can make a push later in the season. So that’s also a factor in this decision.”

While health is important, shouldn’t Hollins and Arcega-Whiteside be getting more practice reps?

Well, he’ll obviously get the reps with the ones. But when I say walk-through, it’s not like walking in the building. It’s a little bit more than that. And listen, we’re going to do some other things that — we’ll do some full-speed stuff today with those guys, so we’ll be fine.

Sanders and Sproles’ names have already been brought up in the passing game, but can they and Jordan Howard also gain traction on the ground?

The Lions are ranked 22nd against the run, so they’re just struggling against running backs period, but the Eagles gained just 49 yards on 21 carries Sunday. Sanders toted the rock 10 times for 28 yards and Howard ran for a measly 18 yards on eight rushes.

One of the things I’ve noticed about Sanders through two weeks, he’s bouncing too many runs to the outside instead of going north/south and picking up positive yardage.

“I think it’s all part of the process, really,” Eagles offensive coordinator Mike Groh said. “That’s an excellent observation. There were some moments in there where you’d like him to stick his foot in the ground and get north, and he can’t outrun everybody in this league like he might have been able to do in the past. That’s the learning experience of a young player. We know he’s going to learn for it. It’s been pointed out and he’ll be better for it. We’ve got a ton of confidence in the guy and he’s going to be a really good running back.”

The Eagles are ranked 31st defending the pass and it’s not going to be easier Saturday having to combat the trio of Kenny Golladay, Marvin Jones and rookie tight end T.J. Hockenson.

Ronald Darby yielded 119 yards through the air and was rated as the fourth-worst cornerback, according to PFF.

“I think he has all of his speed back,” Eagles defensive coordinator Jim Schwartz said. “I don’t see the ACL as being an issue at all for him. He’s done a great job of rehab. He didn’t practice a ton in training camp, so I think — and we have a few players that are in that boat. So I think that sometimes you can see some of that, I don’t want to call it rust at this point, but there is a reason that we still do training camp and we still practice.

Made a couple big plays for us. There’s probably a couple plays he’d like to get back. There’s a 50/50 ball that [Falcons WR] Julio Jones makes a great play on. I don’t know that you can attribute that to an ACL or even missing some snaps in training camp. It’s just life in the NFL. Those guys are going to make some of those. You have to come back and compete. I like the fact that he gave up a touchdown pass and came back and got an interception. Kept his competitiveness up. I thought that was a good sign from him.”

While the cornerbacks are struggling, the big issue here is the pass rush. The defensive ends have still yet to register a sack and the Birds have only recorded two of them. One of them was by Timmy Jernigan, who broke his foot and will be out the next 4-to-6 weeks, while the other came on a blitz by Andrew Sendejo.

Schwartz’s scheme is predicated on getting after the quarterback with the front four and if they can’t get home, the Eagles’ secondary will continue to get picked apart. And while Schwartz has dialed up more blitzes so far, that’s not the norm.

“I don’t know that we really blitzed a whole lot more than we did in the first week. It was maybe a little bit more all-out blitz. Just a couple snaps here and there. I thought a couple times, it was pretty well executed, and we were able to get some key stops and get a turnover, but also, we paid the price for it on that last play. I think we make that play — we made a play on a very similar play, earlier in the game at a very similar thing, but they made the play when it counted.”

Schwartz also explained that the Falcons were chipping the defensive ends and it was tough for the Eagles to get pressure from the edges because of that.

What about Jernigan, how much will his loss sting?

Things have a way of settling down after an amount of time. There’s always going to be an adjustment period when you have new guys coming in and guys are settling into new roles. That’s part of the job description for coaches in the NFL. That’s part of the job description for players in the NFL. We preach all the time that if you’re on our 63-man roster, if you’re here, if you have a seat, practice squad, regular, 53, 46, whatever it is, you’re going to have to be counted on at some point during the season, so get yourself ready. I think we’ve seen that plenty of times, and we might be in that same boat pretty soon.

While defending the pass has been an issue for Philly, stopping the run hasn’t. The Eagles allowed just 3.4 yards per carry Sunday, 17 carries for 57 yards, after holding the Redskins to 28 yards on 13 totes of the rock (2.2 YPC).

So the Eagles are stopping the run and the Lions are having trouble on the ground. 2018 second-rounder Kerryon Johnson has carried the ball 28 times for a minuscule 90 yards (3.2 YPC).

Here’s the thing, though, teams game-plan to throw the ball a ton against the Eagles, so I’m not so sure we’re going to see the Lions give the ball to Johnson on a consistent basis.

PREDICTION: I think the Eagles take advantage of their running backs in this one in the passing game with Jackson and potentially Jeffery both being out. This could be the game where Miles Sanders breaks out. I think he eclipses 100 total yards, Sproles will be a factor as well and the Eagles take this one by 10-plus.