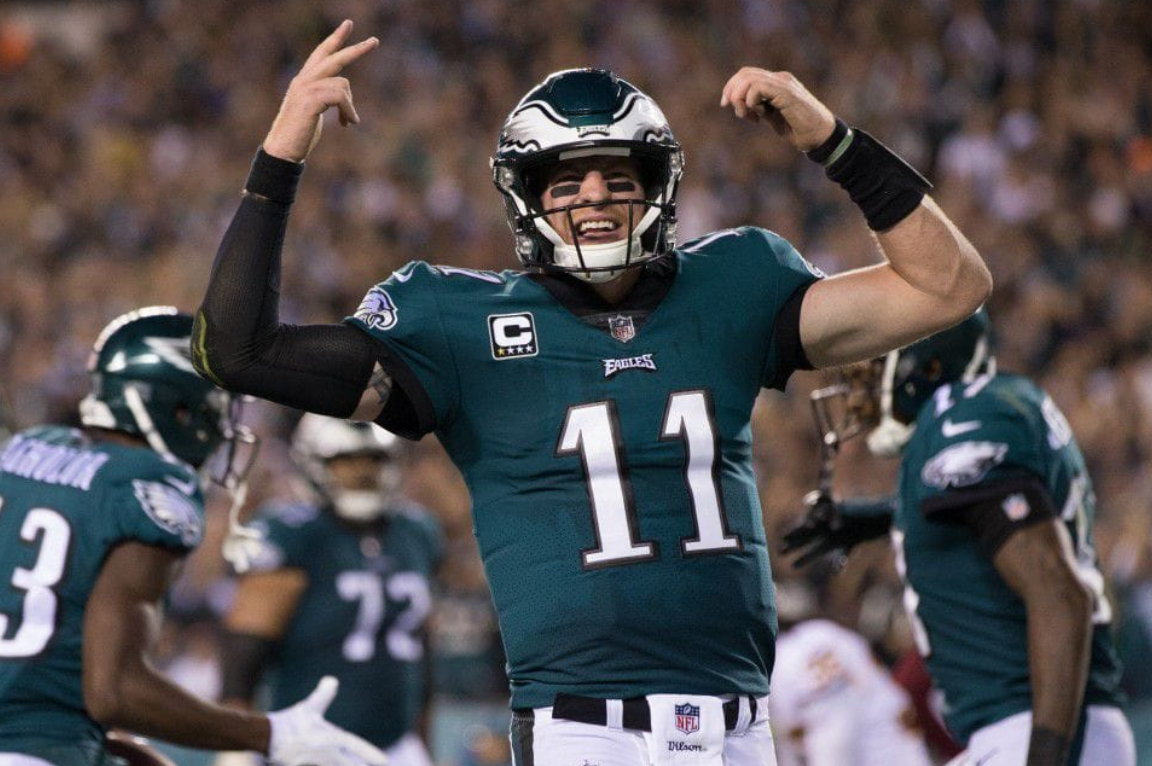 EAGLES FOOTBALL IS FINALLY BACK!!!

And after that brutal preseason, September couldn’t come soon enough! Let’s break down this season opener between the Philadelphia Eagles and Washington Redskins.

Despite not playing in the preseason or taking a meaningful snap in an NFL game since Dec. 9 due to a back injury, Carson Wentz feels “more than ready” for Sunday’s showdown against Washington.

“The offseason’s been great. The preparation, everything, it’s all there, just trying not to press. I’m just trying to play ball and be myself again. I’m excited to go do that on Sunday … Distribute the ball, get it to my playmakers early, and get this thing going. Taking what’s there, knowing when to take your shots, take your chances, and then just live to fight another down. We have a lot of weapons, It’s one of those things where you’re not going to force the issue, you’re going to get them involved where they need to be. It’s all about finding mismatches, and we’re going to be able to do that in a lot of different places.”

Wentz isn’t worried about a potential lack of chemistry with a couple new toys in DeSean Jackson and J.J. Arcega-Whiteside, despite not playing in the preseason.

“The chemistry that you build with your receivers … that goes back to the offseason. You get that in practice just as much as in games.”

Head coach Doug Pederson doesn’t plan to ease Wentz in on Sunday either.

“I don’t think you ease anybody in. I think you have to go in fully prepared. That’s why we practice. It’s why you’ve gone through a grueling training camp, especially at that position and for Carson. I think that’s how you have a little passive mindset, especially as a play-caller. That’s not who I am and that’s not who he is.”

Jackson, who broke his ring finger last week but is still expected to play, will be going against his former team for the second time after spending three years with the Redskins from 2014-16. Philadelphia knows all about Jackson exacting revenge against former teams, with the 32-year-old speedster averaging 95 yards per game and a career-best 14.23 yards per target against the Birds. Jackson’s team won five of the six matchups, including last year in Tampa Bay when Jaccpot hit the jackpot on the very first play of the game, a 75-yard touchdown.

“They had the opportunity to keep me, I guess, and they didn’t, so I get to take out whatever it is I feel on the opponent. I’ve always had the same mentality. That’s the fierce competitive edge that I have. Whoever I go against, whether it’s my best friend or my worst enemy, I’ve been trained and programmed to go about my business in an orderly fashion, to beat your opponent and beat him bad.”

I’m sure Josh Norman will be shadowing Alshon Jeffery around the field like he normally does. Jeffery caught all four of his targets for 40 yards and a touchdown against him in Week 17 last year, while Norman got the better of the first encounter in Week 13, limiting him to three receptions and 31 yards on five targets.

Zach Ertz will be battling with new Redskins safety Landon Collins. Ertz, of course, set a tight end receptions record in 2018, hauling in 116 passes for 1,163 yards and eight touchdowns.

The Eagles are healthier at running back and also added a pair at the position during the offseason after trading for Jordan Howard and acquiring Miles Sanders with a second-round pick in the NFL Draft.

Philly struggled generating traction on the ground last year with their backs averaging less than four yards per carry.

Four of the Redskins’ starters in their front seven are first round picks, which include Ryan Kerrigan, Jonathan Allen, DaRon Payne and Montez Sweat. Even though the Eagles are better at the running back position, it’s still going to be tough sledding trying to run along the interior of Washington’s defensive line.

Case Keenum knows what it’s like to go against a ferocious Eagles defense.

As you saw in that video above, Chris Long got the pressure off the edge, leading to the Patrick Robinson pick-six. Keenum is at his best making plays outside the pocket, he does a solid job of escaping it, but if the Eagles can keep him inside of it, that’s when you can get Keenum to loft up those lollipops. When Keenum sees the pressure in his face, he has a tendency to backpedal and throw the ball off of his back foot.

The Redskins, meanwhile, are dealing with some issues along their offensive line. Trent Williams is still holding out, meaning 36-year-old Donald Penn will start at left tackle. Penn was a Pro Bowler for the Oakland Raiders in 2016 and 2017, but finished the 2018 campaign on IR after suffering a groin injury.

At left guard the Redskins are starting Ereck Flowers, who will have to go against Malik Jackson. Flowers has always struggled recognizing stunts and I’m sure he’ll be seeing a lot of them Sunday with the Eagles’ defensive tackle trio of Jackson, Fletcher Cox and Timmy Jernigan taking advantage of that weakness. Brandon Scherff is solid at right guard and so is Morgan Moses at right tackle, but the left side of Washington’s offensive line can be had.

And the easiest way to keep Keenum in the pocket and collapse it is with pressure up the middle.

Ronald Darby and Sidney Jones were named the Eagles’ starting cornerbacks last week. Jones struggled during the preseason in off-coverage, but this could be a good matchup for him to get acquainted with the Redskins not boasting a true No. 1 wide receiver. Paul Richardson, who is the lone wideout with over two years of experience, signed a massive five-year, $40 million contract last offseason and caught just 20 passes for 262 yards a year ago. He’ll be squaring off with Jones.

Starting on the left side Terry McLaurin, a third-round rookie from Ohio State, while 2018 Mr. Irrelevant Trey Quinn will see the snaps in the slot.

Redskins head coach Jon Gruden spoke about the youth at wide receiver after the team cut Josh Doctson after three seasons with the team.

“I think the emergence of what we think [Kelvin] Harmon can be and Terry [McLaurin] can be and obviously Trey Quinn coming back and Paul Richardson with his speed. Then obviously [Steven] Sims [Jr.] and … Rob Davis with is ability to play special teams was a big factor as well.”

The one thing the Redskins’ receivers do have going for them according to Pederson, there’s not a lot of tape.

“It’s a hard thing because there isn’t a lot of tape. We just have to focus on our preparation. We’ve got to go back and look at previous games. Obviously, you can look at the preseason, and that might give you a little indication.”

Derrius Guice is the new lead back in Washington after missing his rookie season with a torn ACL.

“We drafted him for a reason,” head coach Jon Gruden said Monday. “We feel like he can be a first, second and even a third-down back, if needed. I think the offense, carries wise, will probably go through him, pretty much.”

The offense went through Adrian Peterson last season and he had a career renaissance at 33, rushing for 1,042 yards and seven touchdowns.

Washington likes to run the ball predominantly on first and second down to set up manageable third-down situations, but it could be tough for the Redskins to get a ground game going with their overmatched offensive line going against the defensive line of Philly’s.

The Eagles are 10-point favorites, but I don’t think they win this game by more than 10. Gruden’s bunch seemingly always gives the Birds fits and the Redskins’ front seven is no joke. I do, however, believe that the Eagles match up well with their defensive line clashing against the overmatched line of Washington’s. Keenum is going to get battered and bruised and the Eagles win a rag-tag opener to start the season.