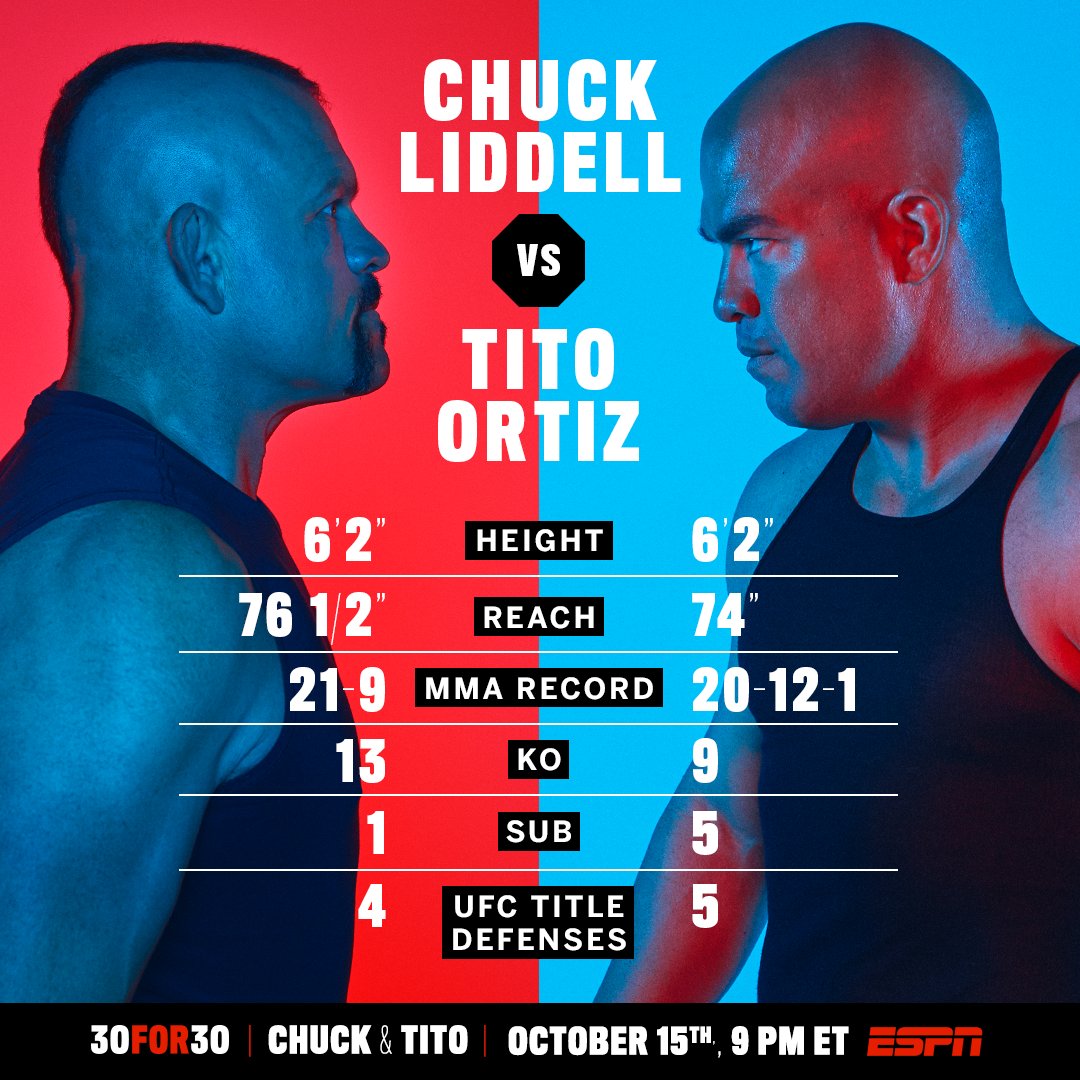 If you’re an MMA fan, diehard or casual, the ESPN 30 for 30 “Chuck & Tito” is a mandatory watch. No negotiations.

The documentary aired on Oct. 15 on ESPN, chronicled everything from the start of MMA with “The Ultimate Fighting Championship 1” with first hand testimony from Ken Shamrock and Royce Gracie to the state of current day MMA highlighting arguably the greatest feud in ultimate fighting history, the beef between Chuck Liddell and Tito Ortiz.

First let’s take a look at Tito Ortiz as shown by the 30 for 30 Twitter handle:

Chuck Liddell fought with NO MERCY

Without really realizing it, Ortiz quickly became the heel the UFC  needed to thrive. I mean, he might have taken it over the top, but he was the ultimate heel in the early days of the UFC. I mean c’mon, take a look at this: Calling out the president of your organization via t-shirt at a weigh in… That’s some next level heel shit. I’d like to see Conor McGregor do something like that instead of putting a moving dolly through a bus window like a coward, but I digress.

As the 30 for 30 said, Tito and Chuck were training partners and friends until things came to a head when Chuck was offered a title shot and Tito stormed the octagon and stole the show. Things were never the same until they met at UFC 47.

“The friendship is over!”

After UFC 47, the relationship between Chuck and Tito was never the same. pic.twitter.com/f2cMyJi6vB

The bad blood spoiled over where the two met for a rematch in 2006 for the light heavyweight belt at UFC 66. Liddell won by TKO in the third round putting the feud on ice, pun intended.

As the documentary pointed out, that fight was the climax of both their careers. Liddell went on to lose 5 of his final six fights in the UFC before retiring. Ortiz went 1-6-1 in the UFC before leaving for rival promotion Bellator. The two met for a trilogy fight in November 2018 in Oscar De La Hoya’s “Golden Boy” promotion where Ortiz won by knockout which in theory should end the rivalry.

During the documentary UFC president Dana White said “Every Tito needs a Chuck and every Chuck needs a Tito,” and this statement couldn’t be more true. Chuck and Tito were the Godfathers of the UFC, the feud between the two of them helped shape the organization into what it is today, for better or worse. If you’re like me you acknowledge that not every fight needs to have bad blood. Sure, it can make for an interesting fight if you think the two guys hate each other, the pay-per-view numbers don’t lie. Look at guys like Conor McGregor and Colby Covington, older guys like Michael Bisping and Chael Sonnen – these guys are cut from the same cloth as Tito Ortiz. They’ll talk trash until the day they die and sell every fight to the fans to make it as interesting as possible.

Tito Ortiz and Chuck Liddell walked so today’s UFC could run, and for that we’re thankful. If you haven’t watched “Chuck and Tito,” you absolutely should. Check it out on ESPN and ESPN+.