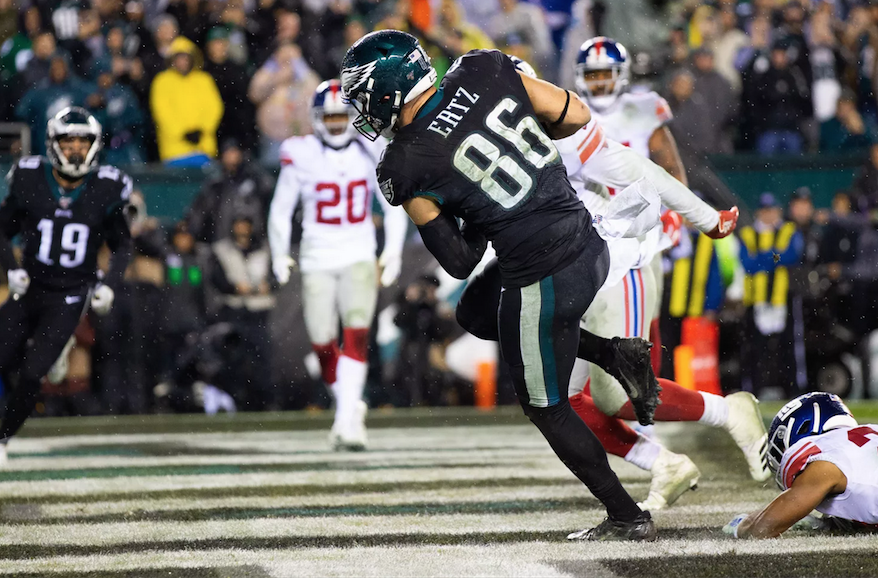 It wasn’t this simple a month ago. If the Philadelphia Eagles win on Sunday, they win the NFC East.

Carson Wentz played mistake-free football last Sunday, completing an efficient 31-of-40 passes for 319 yards and a touchdown. The normally slow-starting Birds raced out to a 10-0 lead after their first two possessions. Wentz began 9-of-11 for 107 yards and hit Dallas Goedert in the back of the end zone for a 6-yard touchdown.

Merrill Reese calls Wentz to Goedert TD in the 1st #Eagles#DALvsPHI | #FlyEaglesFly pic.twitter.com/nqg2BgMAqN
— Nick Piccone (@nickpiccone) December 23, 2019
So that’s now two game-winning drives and a win against Dallas with the season on the line in three straight weeks.

Wentz will most likely have to win this week without Zach Ertz, who suffered a fractured rib in last Sunday’s win against Dallas. Goedert stepped up in his absence, racking up nine receptions and 91 yards and a score. No Ertz nor Wentz’s top three wide receivers from the start of the season, it’s getting thin.

“The biggest thing is just making sure he feels good,” Eagles head coach Doug Pederson said of Ertz. “I think, having gone through this myself personally with this type of injury, it’s discomforting, but want to make sure he’s 100% before we put him back out there again.”

From the practice squad to a main roster hero, the former quarterback Greg Ward is the Eagles’ No. 1 wide receiver at the moment. He has 15 receptions for 166 yards and a touchdown over his last three games, including the game-winner against Washington.

If Lane Johnson can’t go again due to his high ankle sprain, Halapoulivaati Vaitai will get the start at right tackle again. He filled in admirably last week and shut down DeMarcus Lawrence.

“There is progress,” Pederson said of Johnson. “He is doing well. We’ll see again today how he does on land before we make a determination for this game.”

Boston Scott and Miles Sanders were big weapons coming out of the backfield in the second half against the Giants in Week 14 and I’d expect to see them get a lot of passes out into the flats again. Screens, swing passes, we’ll be seeing it on Sunday.

Jordan Howard has finally been cleared for contact after missing his last six games due to a shoulder injury. Pederson said that Howard will be the third running back behind Miles Sanders and Boston Scott.

“I honestly don’t think much has to change,” Pederson said. “I think Jordan is a piece to the puzzle. I think he obviously can add depth, but Miles has been sort of the hot hand lately, and we want to keep that going.”

After missing the last six games and with Sanders’ and Scott’s emergence, where does Howard fit in?

“Challenge is we’ve been planning with Miles and [RB] Boston [Scott], and Jordan gives us obviously a third back, situational guy; we understand who he is.

Again, we mentioned yesterday as far as the conditioning and the game shape and being ready, you just can’t give him a full complement of plays. We don’t want to necessarily disrupt what we have going, but he is a big piece obviously to our offense.”

Is his strength and conditioning where it needs to be?

“I mean, it’s good. I wouldn’t say it’s necessarily probably where he wants it to be, but it’s good. It’s good for playing. Again, we’re going to be smart about it, but we’re full steam ahead with Miles and Boston.”

We’ll see how Howard gets used if the Eagles make the postseason. Philadelphia currently has three backs who can do three different things. Howard can pound the middle of the defense the way LeGarrette Blount did in 2017 and run the clock out in the fourth. Sanders is better outside the tackles and Scott is a Swiss Army knife like Darren Sproles.

Daniel Jones has 17 touchdowns and four interceptions over his last six games, he’s red hot. Jones tossed five touchdowns and threw for 352 yards in a win over the Washington Redskins last Sunday.

“Like a lot of rookie players he has his ups and downs, but he’s playing his best late in the season,” Eagles defensive coordinator Jim Schwartz said. “I don’t know if it had anything to do with sort of — a lot of times rookies can get in there and take a step back. He took a step back for a couple weeks, watched; sometimes that benefits guys.

But he has good mobility. He runs a little bit more zone reads and option stuff than obviously [Giants QB] Eli Manning, and also can scramble, so we have to take care of that. And I think he’s making an effort to get the ball out of his hand a little bit quicker. I think you saw that against Washington last week.

He certainly gets your attention. He threw for a bunch of yards. He scored a lot of points. He had a lot of touchdown passes last week. So, we’re going to have to play our best on Sunday.”

The Eagles didn’t face Jones the first time around, instead it was Eli Manning, who fired two touchdowns to Darius Slayton to help the Giants build a 17-3 halftime lead before the wheels fell off over the final 30 minutes. Both of those scores came against Ronald Darby and he’s now out for the rest of the year with a hip flexor.

The Eagles have allowed 12 more points per game on the road as opposed to at home this season. Schwartz delved into some possible answers.

“It’s always nice to play at home. I think our players feed off the energy of the crowd. I think that was evident on Sunday, too. You couldn’t be around — I came over about 10:00 in the morning over here and the parking lots were already filled, and you could feel that excitement.

So I think that’s certainly a part of it and crowd noise is a little part of it, but we’re going to try just as hard on the road as at home and we have the same process, so after that I really can’t answer that.”

What can the Eagles do to limit Saquon Barkley?

“I thought last time we played him, we treated him like he was 100% and I thought he was,” Schwartz said. “He is a guy that if you give him an inch, he can go the distance. I think you saw that, he caught a wide receiver screen, did a seam route out of the back field, made some of those big plays. He has that ability. I think he has had that ability all season long.

He is a guy you always need to know where he is, you need to account for him both in the run game and pass game. And in the run game, you have to account for all of your gaps. He is a guy that can spin. He is a really good spin move guy and can break contain, so it’s not just your interior guys. Your edges have to hold up well against him.
A guy that can make a big play, and it’s up to us to keep him from getting started.”

Barkley was held to 66 yards rushing on 17 carries against Philly in Week 14, but Barkley erupted for 189 yards on the ground last Sunday against Washington.

PREDICTION: It seems like the Eagles have finally turned the corner they’ve been waiting to turn all season. It seems like they’re going to win the NFC East, but this game scares me more than the Dallas game. I think the Birds take it, but the defense is 12 points worse on the road. They need to show up and the offense needs to continue to limit their mistakes. If they do those two things, they will win the NFC East on Sunday.