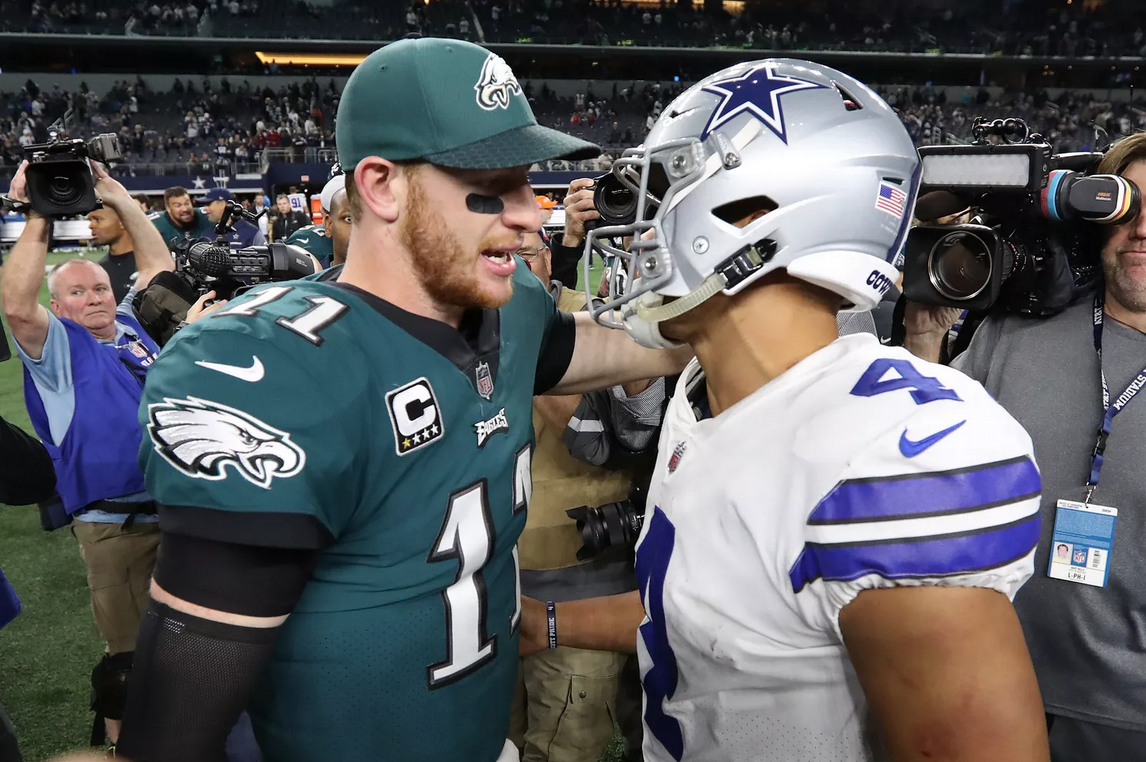 The showdown is here.

We’ve waited an entire season for this, let’s get right into it. IT’S DALLAS WEEK!

That’s now two games in a row where Carson Wentz led the Eagles on a game-winning touchdown drive.

Wentz, who was 30-of-43 for 266 yards and three touchdowns against the Redskins on Sunday, was a perfect 8-of-8 for 70 yards on the game-winning march. He completed all 11 of his passes in the fourth quarter.

Greg Ward was one of the three healthy wide receivers the Eagles had active on Sunday. Rookie J.J. Arcega-Whiteside and the recently called up Robert Davis was the other. Not only have injuries to Alshon Jeffery, DeSean Jackson and Nelson Agholor derailed the receiving core, it was the decision to cut Mack Hollins and Jordan Matthews which allowed for more snaps to the three mentioned above.

Ward is making the most out of his opportunity.

Ward was the lone Eagles wide receiver to record a catch, logging seven of them for 61 yards, including four of them for 40 on the final drive. The 4-yard, game-winner came when he timed his leap perfectly before going up and snatching the pass from Wentz with 26 seconds to play.

All of these important opportunities for so many young receivers, are they ready for the moment?

“Honestly, throw them out there. It’s the only way. You can’t go back to [WR] Alshon [Jeffery] or Nelly [WR Nelson Agholor] at this point or any of those guys, [WR] DeSean [Jackson]. You have to put them out there, right? They kind of grow up in a hurry. We’ve seen that with the young guys that have played.

It’s good for them, and it’s good for us, because we get to see who they are and what we have. But it’s a great opportunity for them at this point.”

The tight ends were targeted 16 times, with Zach Ertz hauling in five balls for 61 yards and a touchdown, while Dallas Goedert posted five receptions for 55 yards. The Cowboys have allowed the fourth most yards to tight ends this season with 858, while also struggling against running backs, yielding the 20th most yards with 621. Miles Sanders and Boston Scott snagged all 13 of their targets against Washington, totaling 89 yards.

Lane Johnson’s high ankle sprain injury is huge. Carson Wentz’s quarterback rating is 20 points lower when Johnson doesn’t play and has only allowed one career sack against DeMarcus Lawrence in his career. Halapoulivaati Vaitai is going to have his hands full if Johnson doesn’t go.

Sanders is coming off the best game of his career, carrying the ball 19 times for 122 yards and a touchdown.

Sanders has steadily improved every week, looking more and more decisive going through the hole and trusting his eyes. There’s less hesitation and his improvements were highlighted by this 56-yard run on a 3rd-and-11.

Give him an inch and he’ll take a mile! #PHIvsWAS | #FlyEaglesFly pic.twitter.com/IfbeDdBiW6

Sanders also caught six balls for 50 yards, including a 15-yard score in the back right corner of the end zone when Wentz scrambled to his right to keep the play alive and rifled a seed into Sanders’ chest.

Sanders is clearly one of the most important weapons the Eagles possess, what can Pederson do to get him more involved against Dallas?

“I think you can try to move him around the formations. In the backfield, out of the backfield, bunches, stacks, things like that that can maybe help.

With every team, you take your best player on offense and they’re going to try to find ways to — defense is going to have to locate that guy.

Same way offensively. Where is the best pass rusher? We have to know where he lines up or something like that. DBs, do they match up with your best receivers?

So those are all things that we go into games and we understand, but being able to move our pieces around to try to help. And then the other guys, just the other guys on the team have to step up and make plays, too.”

#Cowboys RB Ezekiel Elliott said Dak Prescott’s injured AC joint is something he’s had previously and can’t imagine throwing with it. But he also left zero doubt that he expects Prescott will play vs #Eagles.

Prescott was blunt on Thursday.

He didn’t say that he was feeling any pain, instead explaining his symptoms as being “annoying” and “nagging.”

Prescott didn’t throw during practice on Wednesday or Thursday, but did let it rip on Friday. He suffered the injury in the first half against the Rams on Sunday.

We’ll see if the shoulder is a problem Sunday. Someone who always gives the Eagles problems is Amari Cooper, who caught 10 passes for 217 yards and three touchdowns against them last year and followed that up by hauling in five more receptions for 106 yards earlier this season.

The Eagles’ secondary has gotten healthier since the earlier meeting, with Ronald Darby and Jalen Mills are the cornerbacks on the outside, but Philadelphia’s corners have always taken a couple steps backwards after looking so encouraging against New England and Seattle.

“We came out of the bye and I thought against New England and Seattle they played really well and really aggressive. In Miami, we were in position to make some of those plays and we just didn’t and Miami did and obviously it helped them win that football game.

That player last week, [Redskins WR Terry] McLaurin, he’s a good player. He’s talented and he’s quick and he’s agile and he knows how to get open.

We’re at that stage of our game right now in practice where we have to continue to work those techniques, those fundamentals, and obviously you have to study the tape and study your opponent to be in position to make more of those plays.”

Eagles defensive coordinator Jim Schwartz was asked what the Eagles need to do to limit Cooper’s effectiveness.

“First you have to tackle well, and we didn’t do that. We gave up the 75-yarder in the last game. Had as much to do with tackling as anything else. We were a little bit loose on the coverage, but that’s a play that we shouldn’t give up, a 75-yard touchdown.

The other one is you have to make plays on the ball when it goes up in the air. Good vision on the ball, and good high point when you have guys like Cooper that they’ll just throw it up to, you have to be able to come down with that. I think there’s a pass-rush element to it, too. Take the quarterback’s timing away from him a little bit. And I think there’s some scheme to it also and there’s different ways you can roll coverage. Sometimes you’re ‘robbing Peter to pay Paul’ when you do that, but sometimes it can have an effect.”

Dallas has surrendered the fewest sacks in the NFL with 14 and the Eagles have struggled to generate consistent pressure game in and game out all season long. Derek Barnett is questionable with an ankle injury and if he can’t go, that limits the depth in the rotation.

Ezekiel Elliott has had his way against the Eagles’ defense in the past.

In five career games against the Birds, Elliott is averaging 4.86 yards per carry and 114.8 yards per contest. He’s also added 31 receptions for 241 yards and a touchdown.

“He’s a good, strong running back,” Schwartz said “They have a good offensive line, they have good blocking tight ends. They got a quarterback that’s mobile, that will run the ball also. They run some option-type stuff.

So it’s not just him, but there’s a lot of other stuff. They got some big-play receivers. But he’s a strong contact runner and we’re going to have to put a lot of hats on him. It’s not going to be one-on-one tackles. It’s going to have to be gang-tackling, team defense in order to limit his yards and limit his effectiveness.”

PREDICTION: The Cowboys have the better players, they look better on paper, but I’m not sure they’re the better team. Dallas’ win against the Los Angeles Rams was impressive, it was its first victory against a winning team this season, improving to 1-5. The weakness of Dallas’ pass defense fits the strengths of the Eagles’ offense in terms of defending tight ends and running backs. On the other side, Amari Cooper will probably have his way against the Eagles’ cornerbacks as long as Prescott’s shoulder is ok. The Eagles’ defense is a different animal at home than they are on the road, allowing 17.3 points per game as opposed to 29.0.