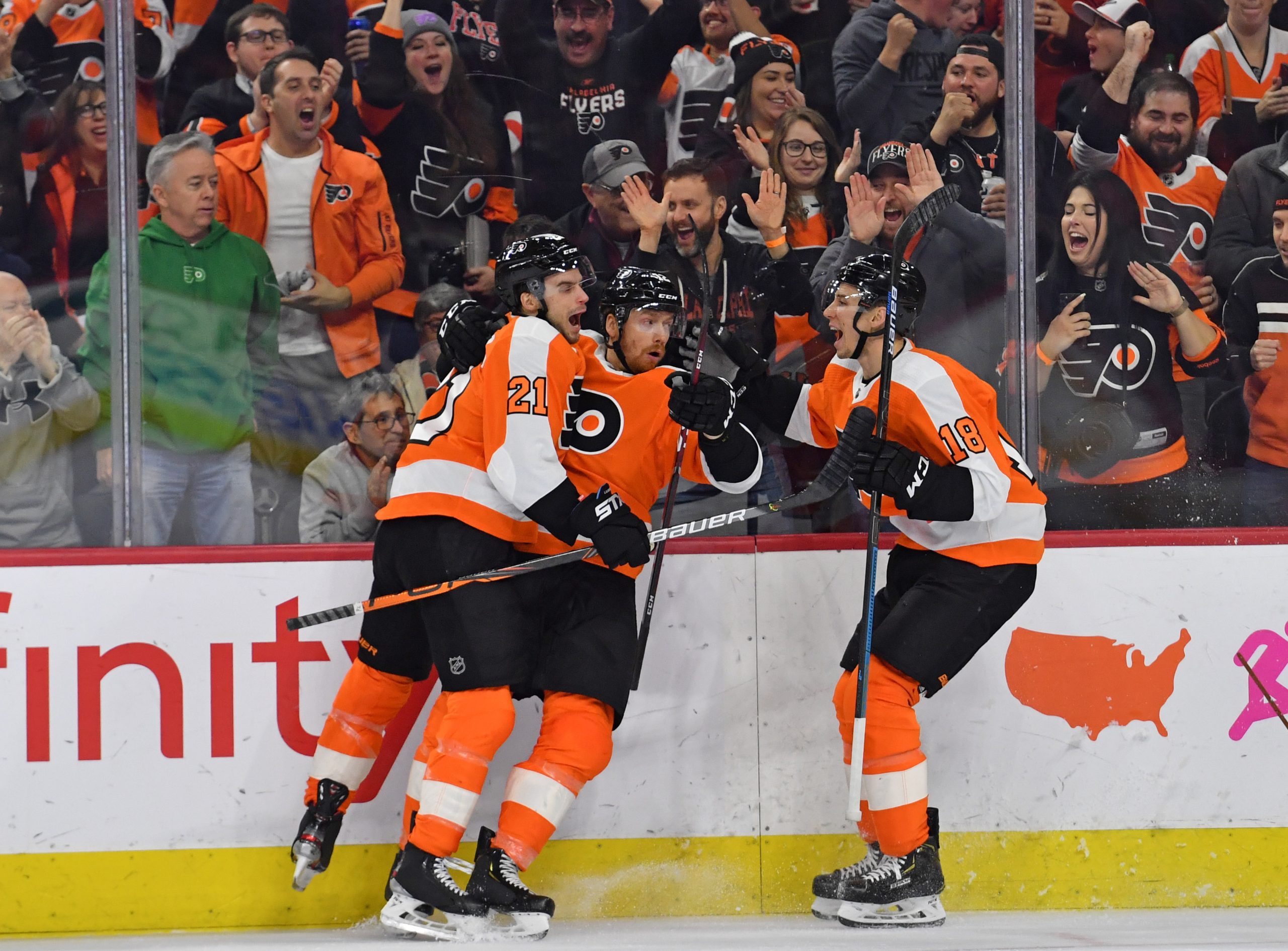 PHILADELPHIA — The Philadelphia Flyers are known for their star power on offense with the likes of Travis Konecny, Claude Giroux, Sean Couturier, and Jakub Voracek. However, it was the offensive depth of the lower lines that did the job on Thursday in a Metropolitan Division win over the Carolina Hurricanes.

Alain Vigneault’s team moved level with the Washington Capitals on 87 points this season after a 4-1 home victory against Rod Brind’amour’s team. Out of a possible 12 points on four goals scored, seven of them came from the third and fourth lines of the Flyers. It continued a trend during this eight-game winning streak that all four lines will be ready to make an impact with a possible playoff run right around the corner.

“Yeah, they [lines three and four] were huge,” Couturier said. “During this winning streak, what’s been really good is the mindset. Guys are focused every night and it doesn’t matter who the opponent is. That is something that shows maturity in our team and I think we just need to keep rolling. Everyone is going and we just have to keep doing what we are doing.”

“I think it just shows the depth of our lineup. Right now, we have all four lines rolling, contributing, playing the right way and it just makes it that much easier for everyone.”

Scott Laughton registered two assists, Michael Raffl and Nicolas Aube-Kubel each scored goals, and Tyler Pitlick, Derek Grant, and Nate Thompson all registered one assist. All six of these players may not be NHL stars, but they are hard-working players who have continued to produce when the team has needed it most.

Against a Hurricanes team, who came into Thursday’s match 10 points behind the Flyers in the Metro, it was bound to be a tough game. The Flyers were coming off a physical win in D.C. 24 hours prior and knew Carolina desperately needed to end a three-game losing streak. However, Aube-Kubel and Couturier scored goals 0:26 apart in the third period to ice a league-leading 24th home win of the season.

“That’s huge to retaliate like that and respond right away,” Carter Hart said. “It just shows how dialed in everybody is right now. Everybody is chipping in. We have all four lines rolling and all three D pairs playing really good hockey right now. I think that is huge.”

“I wasn’t surprised [with how the bottom lines have carried the offense] you look at the parity and you look at the games being played tonight and they were so tight and so hard fought,” Vigneault said. “When Coots’s line is playing head a head with the other team’s top line, when you break out even at the end of the game it might be a good thing so you need your other lines.   I  Nate’s line and Derek’s line again they played extremely well.  Hayesy’s line and Joel had some unbelievable looks tonight, some nights it doesn’t go in but let’s keep them for some other nights and I believe that’s what we did.”

Aube-Kubel, Pitlick, Grant, Laughton, and Raffl are extended their respective point streaks in Thursday’s win, which now sets up the Flyers with another chance to move atop the Metro on Saturday at home. The Buffalo Sabres come to town, a team that sits 12 points out of the final Wild Card spot and are likely to miss the postseason bearing a magnificent turnaround.

The Capitals visit third place Pittsburgh earlier in the afternoon on Saturday, which could make things even more interesting by the time the Flyers begin their pre-game skate on Broad Street. Regardless, the team is on a roll and are showing no signs of slowing down with six weeks to go until playoff time.