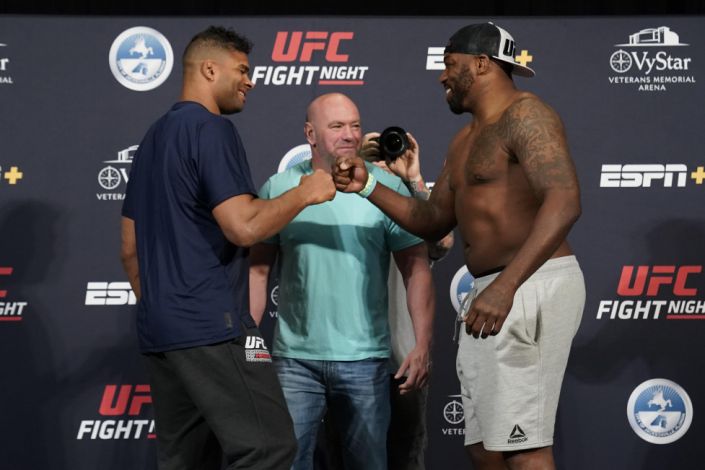 Two successful fan-less UFC fight cards are in the books and tonight’s card makes it three in seven days.

Though no fans are inside the arena, the fights are as entertaining as ever. This appears to be a viable source of entertainment while the COVID-19 pandemic rages on.
A few fights on the preliminary card pique my interest (I’m glued any time Darren “The Damage” Elkins and “The Immortal” Matt Brown fight), but I’ll focus on the main card below.

Yadong and Vera are currently 14 and 15 ranked bantamweights respectively – which would explain why there’s minimal name recognition. Don’t let that fool you, though, oftentimes when fighters are on the tail-end of the top 15 they’re willing to be a bit more daring to try to climb the ranks. Think about it – what do they have to lose? They’re already on the back end of the rankings, a loss and another win puts them back in the same boat. A win can vault them closer to the top 10.

With that said, Yadong is 4-0-1 since entering the UFC with two wins by knockout, one by submission and one by decision. His last fight was a majority draw against Cody Stamman in December, a fight he would have won had it not been for an illegal knee which cost him a point on the judges’ scorecard.

Vera has been in the UFC since 2014 and is riding a five-fight win streak. All five wins came through a stoppage, three by TKO, two by submission.

Yadong and Vera have six “Performance of the Night” bonuses between them – which gives me hope this fight will be entertaining.

I lean toward the crafty veteran here – give me the Vera moneyline at +155.

Both Anders and Jotko erased three-fight losing streaks and take two-fight win streaks into tonight’s fight, both won their last fight by a split decision, too.

Neither are known for knockouts in the UFC, a combined four in 13 wins, the rest are decisions. The oddsmakers are wise to that, giving -200 to the fight going over 2.5 rounds, -162 to go the distance.

In a fight where nobody really has the advantage, I lean toward the underdog. I like Anders’ power and the opportunity to get plus money. Take the moneyline at +130.

Ige, who won his way into the UFC back in 2017 via Dana White’s Tuesday Night Contender Series, is riding a five-fight win streak. Barboza, who’s been around the block a few times, is 1-4 in his last five fights. In his defense, Barboza has faced a murderer’s row of Khabib Nuragomedov, Kevin Lee, Justin Gaethje, and Paul Felder which resulted in a drop to featherweight where he meets Ige.

For consistency sake, I’ll mimic my pick from earlier – give me Barboza. He’s been here before and needs a win now more than ever. He’s the biggest test of Ige’s career and I’m not sure the newcomer has seen a striker like Barboza. Assuming the weight cut goes well the Barboza moneyline is an easy bet to make.

Gadelha famously took a perfect 12-0 record into her title fight against Joanna Jedrzejczyk back in 2014. She lost and has gone 5-3 since then, last fighting in July 2019.

That’s the part that scares me for Hill, with this being her third fight of 2020 already and her fourth in the last 9 months. This is Cowboy Cerrone levels of production, which is starting to fail him. Do I think she’s ready for the moment, facing a former title contender? Absolutely. I’m not sure how she’ll hold up after four camps in 9 months. I want to like the Hill moneyline, but I’m leaning heavily toward Gadelha.

She has the experience, she’s a well-rounded fighter and has taken close to a year off. She’ll be well-rested and ready for anything Hill throws her way. Give me Gadelha by decision at -106, slightly more appealing than the -230 moneyline.

This is it – the main event. A battle between the eighth and ninth-ranked heavyweights in a division run by Stipe Miocic, Daniel Cormier, and Francis Ngannou, the winner of this fight could find themselves one fight away from a title shot.

Overeem’s been around forever, but he’s 2-3 in his last five fights, none of which went the distance. He’s won by knockout and lost by knockout.

Harris is 3-1 (1) in his last five fights – winning thrice by knockout, losing once by disqualification, and one No Contest after winning a split decision over Andrei Arlovski but having it taken away after testing positive for a banned substance.

Part of me thinks that this is the fight where everybody predicts a knockout but the two guys respect each other’s power too much and it gets drawn out to a decision. For that reason, I lean toward the Harris moneyline at -148. I think he has a lot to fight for, considering this is his first fight since the killing of his stepdaughter. Mix in the fact that I think Overeem’s cooked and the decision to pick Harris is a no brainer. Harris by KO, TKO, or DQ runs at -115, too.

Coverage for the fights starts at 6:00 p.m. on ESPN and all odds can be found at DraftKings sportsbook. Hit me up on Twitter (@AntMazziotti) and let me know what plays you like and who you think will win.