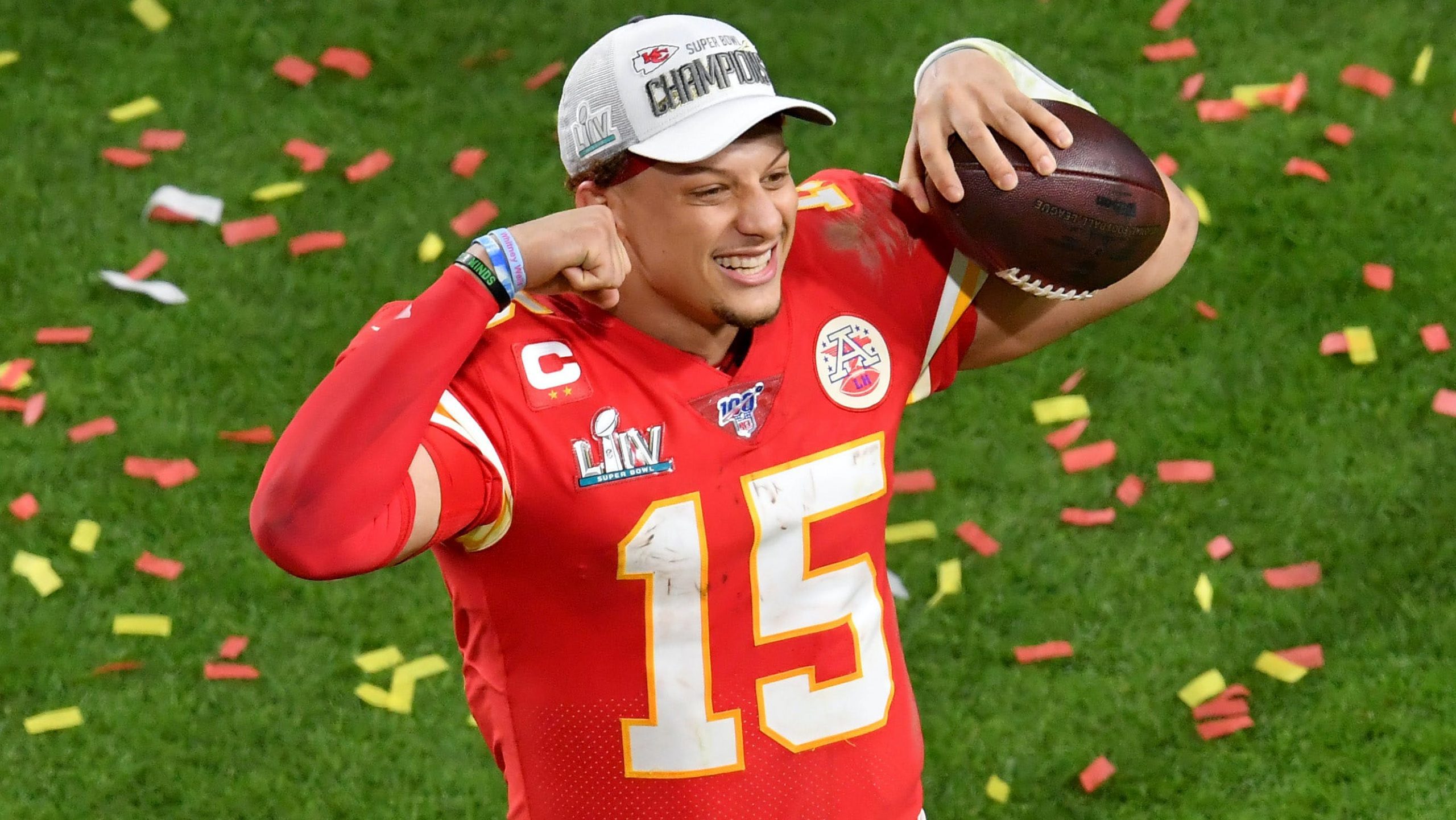 If there was a theme to this year’s off-season in the National Football League not related to the COVID-19 pandemic, it would be the Rich Got Richer. Many of the elite teams from 2019 did a tremendous job retaining talent and acquiring useful playmakers on draft day. I will take a look at two of the teams that find themselves in a very good position to make a run at the Lombardi Trophy in this week’s Futures Faceoff: the defending Super Bowl Champion Kansas City Chiefs and the New Orleans Saints.

Prepare to dive into these teams’ off-seasons, strengths, weaknesses, strength of schedule, and many more factors to see who is in the better position remain among the NFL’s elite. The goal is to determine which team is the better investment, based on the current odds, in the futures win total market.

Patrick Mahomes had defenses at his mercy en route to securing Andy Reid his first-ever Super Bowl. His unprecedented three consecutive postseason comebacks by 10 or more points cemented himself as the premier quarterback in the league. The Chiefs ranked second in scoring, yards per play, and passing efficiency. Mahomes torched the Titans defense for 35 points in the divisional round of the playoffs the week after they bottled up Baltimore. That leaves us salivating to see what Mahomes can do in a year where he isn’t battling through a high ankle sprain and dislocated kneecap.

The bad news for NFL defenses isn’t that Mahomes is coming into this season healthy, but that he’s coming in with even more weapons. The Chiefs selected Clyde Edwards-Helaire to end the first round and the LSU product seems like the perfect fit for Reid’s scheme. Edward-Helaire’s combination of quickness, power, and receiving ability gives the Chiefs’ head coach the type of back that can maximize opportunities in the screen game while Hill, Watkins, and Hardman stretch defenses vertically. Mecole Hardman enters 2020 will his rookie season under his belt, adding more versatility to an offense that nearly impossible to stop last season.

Sean Payton addressed his offense’s biggest weakness this off-season when they signed wide receiver Emmanuel Sanders. A deep threat with the agility to gain yards after the catch should give Michael Thomas more space to operate. The offense has been missing that complement to Thomas ever since they shipped Brandin Cooks to New England. Cooks’ departure was fueled by his concerns over Brees’ ability to get him the ball deep at this stage in his career. Brees’ arm strength is even more of a question heading into his 20th season, so expect to see more Taysum Hill this season. The Saints were fourth in offensive DVOA and sixth in yards per play, so it’s safe to say they will only get better with a weapon like Sanders.

Looks like Emmanuel Sanders and Drew Brees are putting some work in pic.twitter.com/hi7SoNqJ8i

It’s no secret that the Chiefs win with offense, and the defense will always be more of a complementary piece. However, Kansas City recognizes the importance of that piece being competitive. After securing Mahomes with a record deal that can reach $503 million, the Chiefs locked up their defensive MVP Chris Jones with an $85 million deal. In the 2020 draft, Kansas City invested four of its six draft picks on defense, starting with coverage linebacker Willie Gay Jr. The machine around Mahomes gets the oil first, but the defense should be improved heading into 2020. The unit returns all the starters from its secondary and could have one of the most dangerous safety combinations in the league with Juan Thornhill and Tyrann Mathieu.

The Saints aren’t typically known for their defense, but last year’s unit finished just outside the top 10 in defensive DVOA and yards per play allowed. Marcus Davenport started to come into his own, racking up six sacks in thirteen starts. Only six teams had a better adjusted sack rate than New Orleans. The Saints added more flexibility in their secondary with Malcolm Jenkins in hopes that his leadership can help a Saints defense get to the next level after being torched by the Vikings in the Wild Card Playoff last season. Overall, the additions are positive, but it’s important to point out that many of the key players they are counting on are in their 30s. Injuries and decline could play a factor for guys like Jenkins, Demario Davis, or even Cam Jordan. Outside of Marshon Lattimore, the secondary still lacks consistency in terms of coverage.

Strength of schedule is fluid and there are multiple factors that influence performance throughout any given year. I’m fairly certain the Packers had no idea they would be facing Matt Moore in Kansas City last season. However, there is still significant value in understanding how scheduling impacts certain teams. For this series, I utilize  Sharp Football’s strength of schedule which is determined by each opponent’s 2020 forecasted win totals instead of their 2019 record.

Both teams ended up better off than over the league in terms of strength of schedule last year. Granted, these teams had a combined record of 25-7, so most opponents will look easy. This season it’s a different story – the Saints are forecasted to have the ninth toughest schedule while the Chiefs have the 10th easiest.

The Saints start the season against Tom Brady and the new-look Bucs, but it’s really the end of the year where they will be tested the most. After three straight road games starting in the Denver altitude, they travel to Atlanta and then to Philly in Week 14. They will be happy to finally get home to the Superdome … until they realize Mahomes will be waiting for them. The Vikings then visit before the Saints cap off a brutal five-game stretch, ending the regular season in Carolina. It’s not ideal that Saints opponents ranked seventh overall in passing efficiency considering I targeted the secondary as the Saints’ biggest uncertainty on defense.

The rich got richer, and drawing the 10th easiest schedule coming off a Super Bowl is as rich as it gets. As much as I think the AFC West has improved, it’s hard to find challenges for the Chiefs. Week 3 gives us the most anticipated game of the year, with Mahomes facing off against last year’s MVP in Lamar Jackson.

Lamar Jackson on Patrick Mahomes: “I’ve got to get where he’s at” https://t.co/7akcetr6xa

Splitting hairs with the Saints

There is a lot to like about the Saints this season. Payton is a top five coach, Brees is throwing to the most productive receiver in the NFL, and the defense has a strong pass rush that can pin their ears back with a lead. I can write a book on the strengths of the Saints, but let’s take try and find some minor red flags that could make a difference in them cashing the wager of over 10.5 wins.

Offensively, we could see continued regression from Alvin Kamara. Warren Sharp details Kamara’s regression in his 2020 preview which includes yards per reception, yards after contact, broken tackles are first downs. It’s very possible the addition of Sanders can supplement any additional regression from Kamara, but Sanders is another veteran the Saints are counting on who is well into his thirties.

If the Saints are going to maximize Sanders’ ability, they are going to do it with Hill. Payton’s strategy to have Hill occupy more market share of the playbook is something that concerns me. Although Payton seems enamored with Hill, his preoccupation with making this time-share succeed seems to hurt the offense overall. The individual plays where Hill is utilized work, but I struggle to come up with reason Payton couldn’t adjust to Zimmer’s inside pressure in the biggest game of the year. Sure, Hill made the highlights, but not only were they not prepared for Zimmer’s tactics, but they were completely unable to neutralize the pressure in real time. That’s not the Saints head coach I’ve been watching the last decade.

The odds and why my money is on Mahomes.

There are two things to consider when evaluating these wagers. Kansas City has to reach 12 wins to beat the 11.5 total while the Saints only need to get to 11 wins. The odds are much more attractive for the Saints sitting at -106 which returns $94.33 on a $100 wager. The Chiefs’ wager at -121 yields $82.64. All things being equal, the Saints are more attractive. As I alluded to above, all things are not equal.

The Saints are counting on veterans in their 30s to lead all three levels of their defense in Jenkins, Davis, and Jordan. They still have some concerns in coverage. Offensively, we could see mild regression from Kamara, Brees, and Sanders. Even tight end Jared Cook is 33 years of age. Veterans teams are good, but there is a higher risk of injury as well.

The Chiefs were as dominant as I have seen an NFL team when Mahomes was completely healthy last year. His repeated postseason miracles will live forever in Super Bowl folklore. How confident am I that they can reach 12 wins after going 12-4 the previous two seasons? Very confident.

The 2020 season will be different than any other NFL season. It’s almost a certainty that teams will be playing in front of very limited fans if any. That is a disadvantage for teams like New Orleans who have benefitted from loud crowd noise impacting opposing offenses. The Big Easy is going to be a little easier for Saints opponents. The books have already accounted for this adjustment moving home field advantage down to 1.5 – 2 points per game.

Most importantly, defenses are not going to have the same advantages in the past. Offenses will be able to operate without disruption. I believe there is potential for 2020 to be the most explosive offensive season to date. What team is likely to benefit the most? The team with Mahomes. If you thought Mahomes could do whatever he pleases whenever he desires last year, wait until you see this season. I wish I could find odds on the Chiefs averaging 40 points a game because there may be value. The Saints are a great team, but Mahomes is the best bet out there. I’m taking Kansas City over 11.5 wins and I will be no-look passing stacks of money into my account come January!