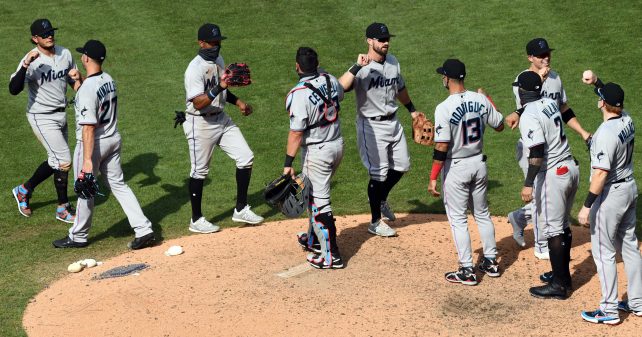 When ESPN’s Jeff Passan reported Monday morning that 10 Marlins tested positive Sunday in addition to the four that were already publicly known, there was a question as to how far in advance the Marlins knew, and if the Phillies knew at all.

According to the Inquirer’s Matt Breen, the Phillies knew before Sunday’s game was played about the additional positive tests on the Marlins.

The Phillies were alerted Sunday morning about the Marlins’ situation and sent a text message to their players. They didn’t know exactly what Marlins players were positive, but told their team to take precautions. Bryce Harper wore a mask when he ran the bases. Rhys Hoskins had a mask on when he played first base.

But the Phillies never considered not playing. Manager Joe Girardi said he thought the Marlins “followed protocol.” Harper said the Phillies do “all the things the right way to hopefully not contract that.” So they played Sunday, but can’t play Monday.”

“We’re always concerned,” Girardi said. “I think you see our guys take precautions on the field. The good thing is when we do see players from the other team, it’s on the field and outside. There’s usually a lot of distance. So you hope that that protects our club. The problem is when somebody gets it inside your clubhouse that’s aware of it for a day or two and then has the ability to spread it around to a few people. It sounds like that’s what happened there.”

As far as the Marlins’ side, they don’t seem to be making a big deal out of it.

“That was never the mentality [to not play],” Rojas said. “We knew that this would happen at some point. We came to the ballpark and we were ready to play. That was never our thought that we weren’t going to play.”

While this is the first big outbreak in Major League Baseball, it’ll serve as a precedent should any other club experience an outbreak similar to the one in the Marlins’ clubhouse. The team is staying in Philadelphia and self-quarantining for the time being. There’s no word on what tomorrow’s games for either team looks like as of this writing.