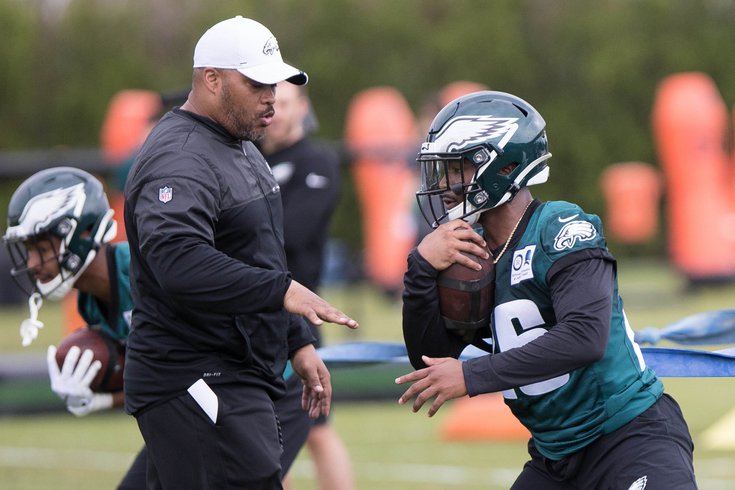 The Philadelphia Eagles’ offense may revolve around star quarterback Carson Wentz, but tailback Miles Sanders is quickly forcing his way into the conversation.

Sanders is heading into his second NFL season after breaking out in the Eagles backfield as a rookie in 2019. The former University of Penn State running back led all first-year backs with 1,327 yards from scrimmage (an Eagles rookie record) and also set the franchise-rookie marks for all-purpose yards (1,641) and rushing yards (818).

Assistant head coach and former Eagles tailback Duce Staley reached 1,000 rushing yards in his second year as a professional and is backing Sanders to improve even more in 2020.

“I think he can go out there and he can handle that part of it. He showed last year. He flashed last year. He worked hard. He got to know the offense – the passing game and the running game and running routes also out of the backfield. His hands got better. You saw a kid get better every week.”

A major issue with NFL running backs in today’s game is the worry of their production dropping from year one to two. Sanders exceeded all expectations as a rookie for the Eagles, whom leaned on him down the stretch due to inconsistency at the wide receiver position.

The 22-year-old won’t be a secret weapon this season as teams from the NFC and the rest of the league look to limit his big-play ability. Despite more challenges coming his way in the 2020 season, Sanders will be expected to deliver for the Eagles, a big challenge Staley thinks the young tailback can handle.

“I think what Miles does well is preparation. We talk about that a lot. One of my sayings also is: Zero in on preparation, not competition,” Staley said. “I tell them (the running backs) all the time to prepare yourself, make sure you’re prepared for every scenario, make sure you’re able to go out there and tell me what’s going on on every play, not only your position.”

The Eagles will kick off the 2020 regular season against the Washington Football Team on September 13, pending no changes are made due to the COVID-19 pandemic. Sanders will certainly be one player to keep an eye on this season as the Eagles look to recapture an NFC East Division crown.