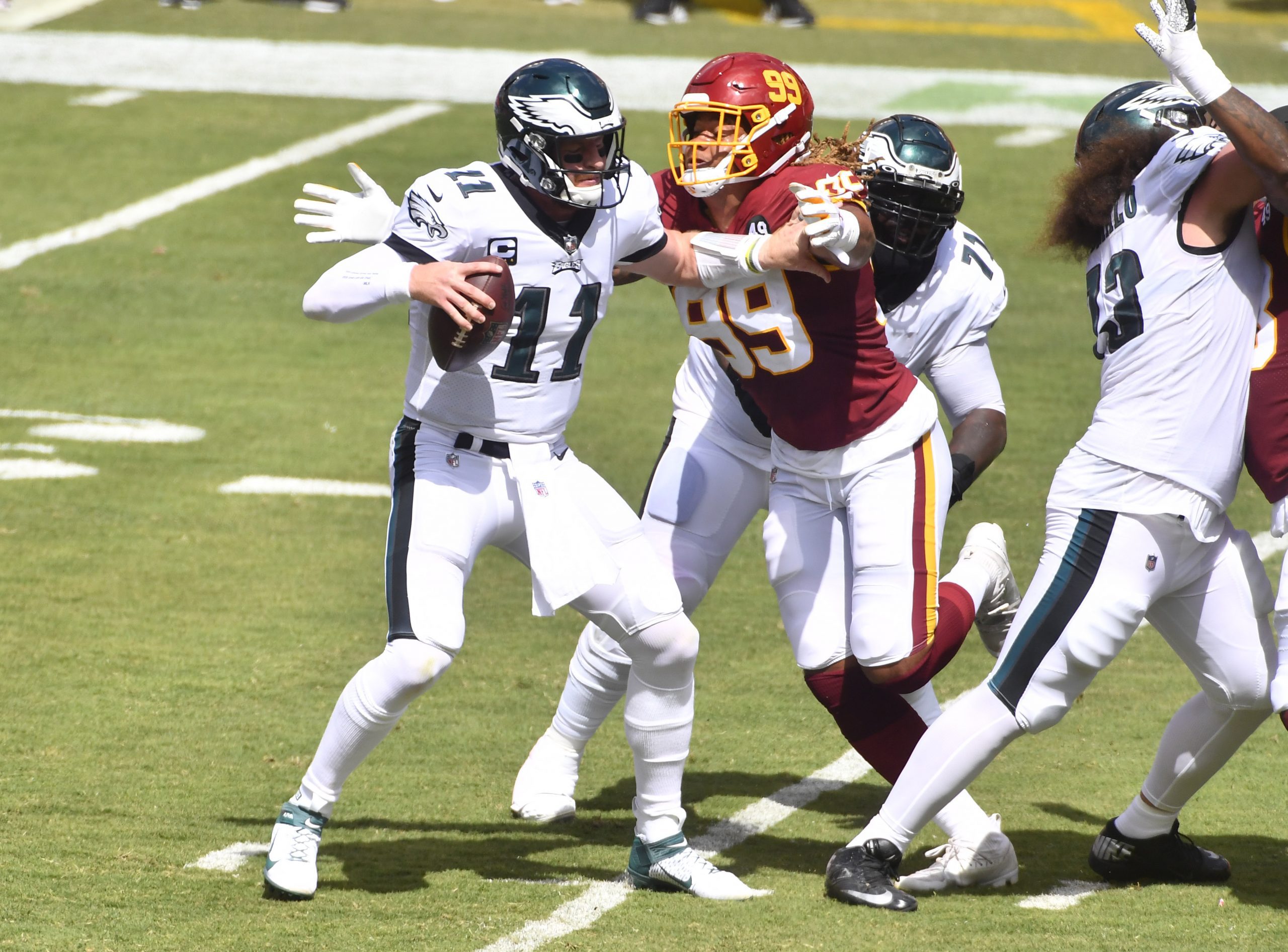 Carson Wentz started off hot against the Washington Football Team on Sunday at FedEx Field, but eventually struggled to find any consistency in an eventual loss for the Philadelphia Eagles.

A 27-17 opening day loss to Washington saw the Eagles’ six-game winning streak over its NFC East rivals snapped and the Birds fall into an 0-1 hole already. Wentz started off the game completing 14 of his opening 18 passes which also included touchdowns to both Zach Ertz and Dallas Goedert. Eventually though Wentz’s hot run drew cold and so did the Eagles offense in a disappointing defeat.

“I’ve got to be better, I know that,” Wentz said postgame. “We came out offensively feeling good. We moved the ball right down the field [scoring on the first offensive drive], put up points, got ahead in the game. I’ve gotta clean up the interceptions. I put our defense in a bad spot on a couple of occasions. We definitely lost some momentum and we didn’t make the plays we needed to make.”

Wentz’s first interception came with under two minutes remaining in the second quarter, which Washington turned into seven points and a game changer going into the second half. He tossed another interception later in the game and was also stripped late by Ryan Kerrigan, which ultimately killed the Eagles chances at a late comeback on the road.

“I’ve got to be better. It starts with me. I’ve got to protect the ball and lead these guys better and I’ll own that.”

It didn’t help Wentz knowing that three of his projected Week 1 starters on the offensive line was out including right tackle Lane Johnson. Jack Driscoll made his NFL debut at the position, but even he was replaced by Jordan Mailata after suffering an injury of his own. Nate Herbig also was tossed in at right guard, dealing with several talented defensive lineman such as first-round pick Chase Young, Jonathan Allen, and Da’Von Payne.

However, Wentz’s confidence looked to take a hit as the game went on while the Eagles failed to stay with the running game. Pederson only ran 17 running plays which totaled 57 yards, with Boston Scott getting the bulk of those touches. Wentz can’t be excused though for his lack-of-ability to get rid of the ball [he suffered eight sacks] and admits he has to be better for the Eagles to earn victories.

“It was very frustrating walking off that field knowing the momentum and how we felt early in that game. We got up early, off to a great start, and it kind of spiraled out of control, and the next thing you know, we were in a 2nd-and-15 multiple drives in a row and just couldn’t get ahead of the chains and make plays. We turned the ball over, we’ve got to protect the ball … it was definitely frustrating.”

The Eagles found it tough dealing with Washington’s defensive line and now have to deal with another top talent in Los Angeles Rams defensive tackle Aaron Donald. Donald recorded one sack in the Rams 20-17 Sunday night win over the Dallas Cowboys, while Michael Brockers and Leonard Floyd also got in the sack column.

While Wentz’s collapse is worrying, he has 15 more opportunities to turn it around. 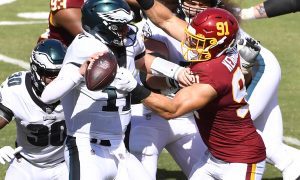