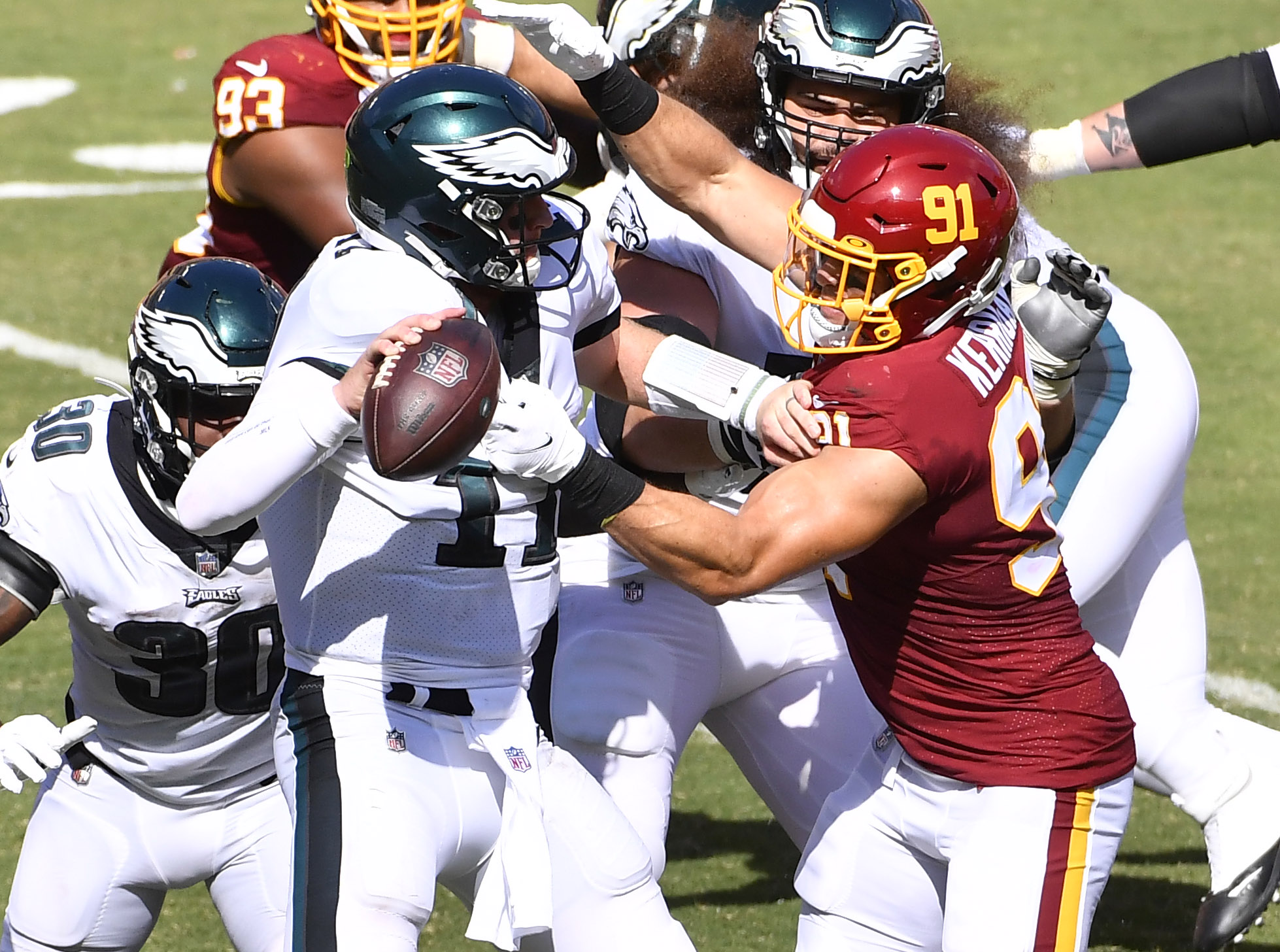 The Philadelphia Eagles started off impressive versus the Washington Football Team, but ultimately withered away in what ended up being an opening day loss on the road.

Dwayne Haskins threw for 178 yards and one touchdown while Peyton Barber added a pair of rushing scores as Ron Rivers’ side picked up a 27-17 win. Defensively, Washington recorded eight sacks on Carson Wentz and also intercepted the fifth-year quarterback twice in what proved to be its first home opener win since 2014.

Philadelphia raced out to a 17-0 lead in the opening half with Wentz connecting with Zach Ertz and Dallas Goedert for scores. Ertz’s score capped off a six-play, 57-yard drive in the first quarter which put the Birds up 7-0.

Who’s got the first #Eagles TD of the season?

Jake Elliott added a 38-yard field goal later in the quarter before Wentz found Goedert for a 34-yard strike in the second quarter. However, Washington hit back before halftime to gain confidence heading into the second half.

A thing of beauty.#PHIvsWAS | #FlyEaglesFly

Dwayne Haskins connected with Logan Thomas to make it 17-7 after Washington completed a five-play, 45-yard drive of its own.

After the Eagles failed to get anything going to start the third quarter, Peyton Barber pulled Washington to within three points after a one-yard score of his own, his first for his new team. Dustin Hopkins tied things up with a 38-yard field goal, continuing the unanswered scoring run by the hosts.

Fabian Moreau and Jimmy Moreland both registered interceptions for Washington’s defense which continued posing fits for Philadelphia. Washington took the lead in the fourth quarter after Barber pounded his way in from three yards out.

Ryan Kerrigan iced the win for Washington with a strip-sack fumble recovery allowing Hopkins to add a 40-yard field goal as the final nail in the coffin. Overall, the Eagles struggled to deal with the pressure from Washington’s defensive line and failed to get any consistent from the wide receiver position.

Rookie Jalen Reagor made a 55-yard grab in the contest but did not record another catch the rest of the way. DeSean Jackson and Greg Ward each caught multiple passes, while Goedert led the team with 101 yards on eight catches.

Miles Sanders’ absence left Boston Scott and Corey Clement as the lead backs, but the two each finished with under 40 yards apiece on the ground. Injuries also hurt the Eagles, who lost both Vinny Curry (hamstring) and Brandon Graham (concussion) to respective injuries while Jack Driscoll also left forcing Jordan Mailata to come in at right tackle.

The Eagles (0-1) saw its six-game winning streak against Washington snapped in the process and will face a tougher test next weekend from the visiting Los Angeles Rams.