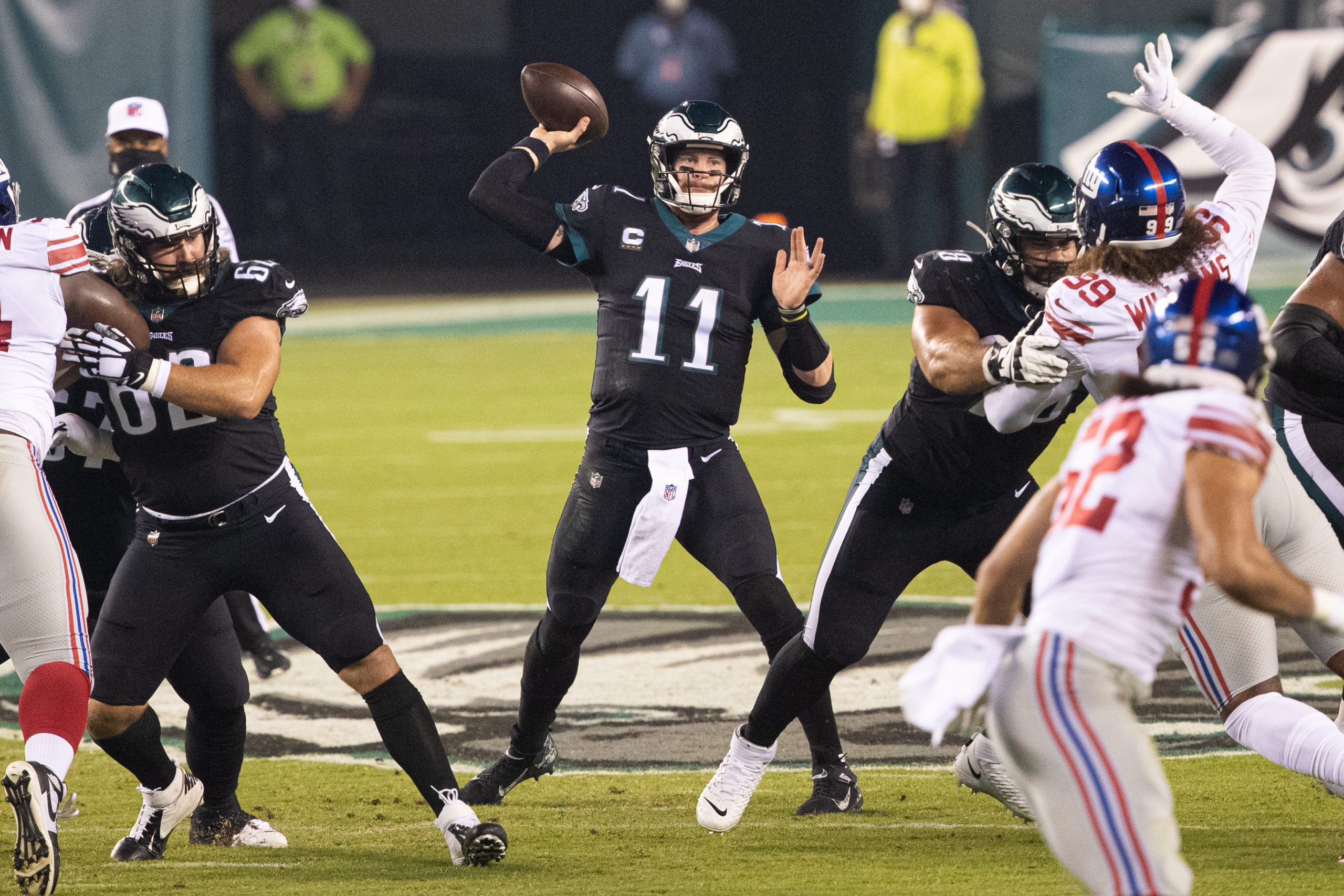 The Philadelphia Eagles didn’t look pretty in a 22-21 win over the New York Giants last Thursday, but got rewarded for their fight back to earn a second victory of the season. Now, the goal will be to build off of its last-minute heroics to take a better grasp of the NFC East with the Dallas Cowboys coming to town this weekend.

Carson Wentz did throw one interception against the Giants, but tossed a pair of late touchdowns in the fourth quarter to put the Eagles in front for good. It was a strong performance from Wentz overall, who continues to work without his top two tight ends, top wide receiving options, and his starting tailback. Now the focus will be on cleaning up his simple mistakes and try and put in a perfect outing against Mike McCarthy’s team on Sunday night.

“It does a lot for our confidence the way we’ve really fought to come back in the last couple ballgames. To actually do it and pull out a win is huge for our confidence and we know it’s a divisional game,” Wentz said. “So, it’s huge for the NFC East, as well. We’d love to not be in those situations where our backs are against the wall. We left a lot of plays out there. We were in the red zone a lot and didn’t score many points. Those are the things we have to clean up and be better.”

“But when our backs are against the wall and we have to make plays, I’m going to give guys all the opportunity in the world to make them. (Head Coach Doug Pederson) does a great job of calling the game in those situations where we’re playing fast and putting a lot of pressure on the defense. We’re obviously doing some good things in those situations. We have to keep building on it. But again, ideally, we don’t put ourselves in those situations. But when we need it, we’ve been successful for the most part so far.”

RELATED: The fantastic Merrill Reese and Rickie Ricardo calls from Eagles vs. Giants

Wentz has had his fair share of turnovers this season, with 12 turnovers so far in seven games and 10 of those being interceptions. Still, the fifth-year starter has helped the Eagles put in good performances over the last three weeks in fightbacks against Pittsburgh, Baltimore, and most recently New York.

His 359 passing yards against New York were the most from Wentz this season while his three combined touchdowns marked the second week in a row that the 27-year-old quarterback reached that number. With a struggling Cowboys team coming in, who also could be calling on third-string quarterback Ben Dinucci due to Andy Dalton’s concussion, Wentz may have another chance to impress in what the Eagles could call back-to-back division wins.

“It’s good to see your quarterback being able to put the team on his back and lead a comeback like he did in this game,” Doug Pederson said. “Obviously, the Baltimore game is another one where we made the comeback and put ourselves in a position to tie that football game. That part is good to see. We want to try to at least minimize being down two scores late in the fourth quarter and have to come back every week. Those are hard to overcome. That’s one of the things you love about Carson, he’s constantly fighting with his guys and battling with his guys out there. He wants the ball in his hands at the end of the game.

“The other thing is when we’re down two scores like that, you go right into your two-minute offense. You saw the play (59-yard gain) to (John) Hightower, you saw the play (30 yards) to Richard Rodgers. The Richard play was a scramble, big play in the game. That’s who Carson is, a constant competitor and wants to win.”

Dallas still poses a threat offensively with Ezekiel Elliott in the backfield and Amari Cooper, Michael Gallup, and CeeDee Lamb out wide, but with Wentz’s better performances of late, the Cowboys’ slumping defense could be in for a long night in South Philly.