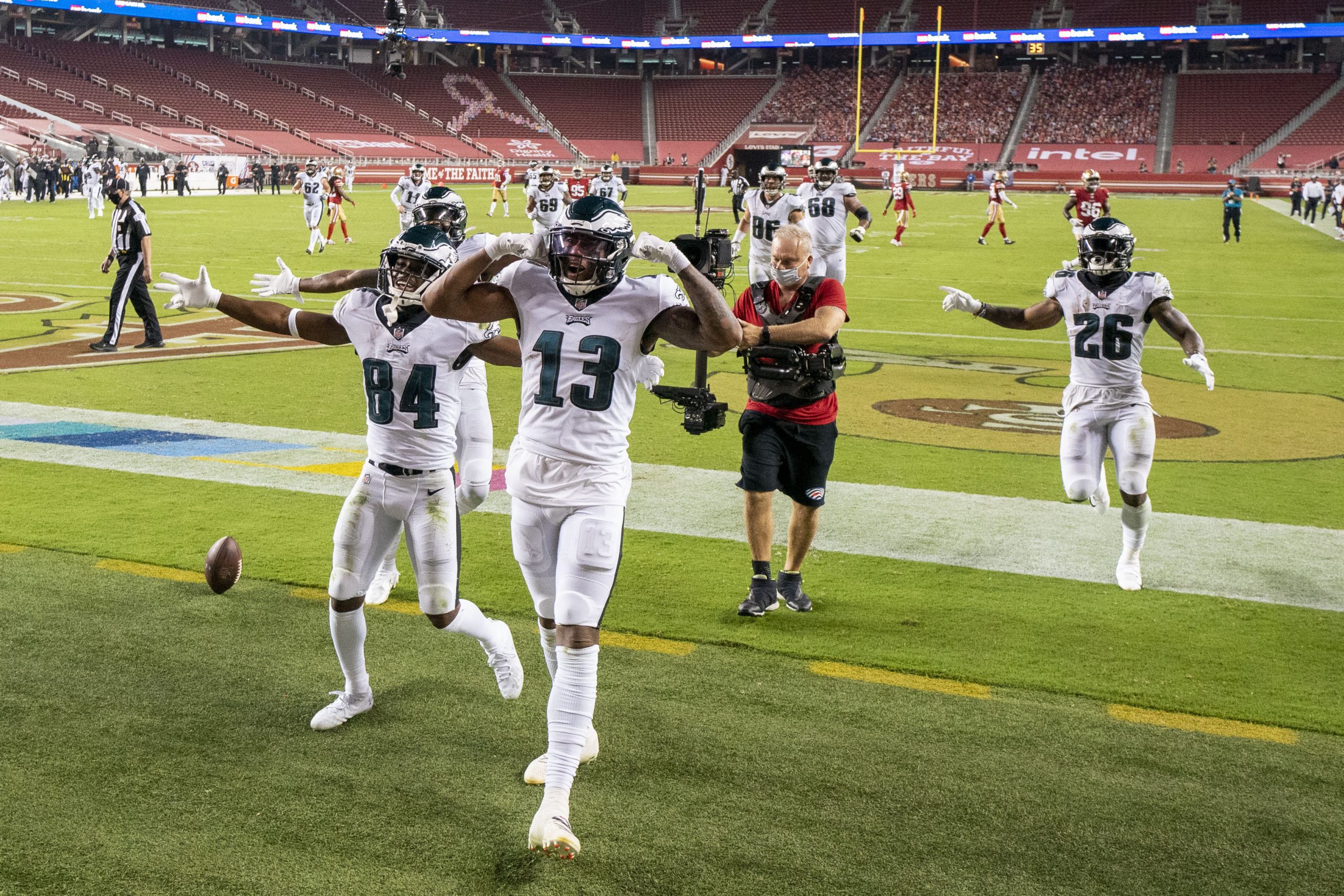 Travis Fulgham has put in back-to-back impressive performances for the Philadelphia Eagles, but his role for the team going forward might be in jeopardy.

Fulgham, mainly a practice team player in his National Football League career, has eclipsed the 200-yard mark with the Eagles this season, giving him his first statistics as a professional player. After totaling 57 yards and one touchdown in a Week 4 win over the San Francisco 49ers, Fulgham upped his production in Sunday’s eventual defeat to the Pittsburgh Steelers.

Fulgham led the Eagles with 10 catches for 152 yards and one touchdown in a 39-28 loss at Heinz Field. The 25-year-old has filled in nicely during Jalen Reagor and DeSean Jackson’s absences, giving Carson Wentz a big target down the field to connect with.

“Well, I think the first thing is Travis has played in games, NFL games before,” Eagles head coach Doug Pederson said. “So it’s not new to him. Even though he’s new to us and new to the City of Philadelphia and obviously to you guys, we’ve seen him on tape. Now, maybe not the same type of production, but we’ve seen him in action. And then when we got him here to our football team, we saw him in practice make plays.”

“He just attacks each day ready to learn, ready to get better. He’s always throwing with Carson. Carson’s grabbing him between periods at practice and working on routes and details of routes and timing of routes and that’s what it takes with everybody and not just one guy. It’s a pleasant surprise to see him step up the way he has the last couple weeks.”

Fulgham played in three games with the Detroit Lions in 2019, however did not produce a catch or hard in those appearances. After being claimed by the Eagles on waivers, he has not let his past control his present with the team, contributing in an offense which has been inconsistent for most of the season.

His role for the Eagles may very well take a hit going forward as Jackson, Reagor, and Alshon Jeffery all could feature in the next coming weeks. Jeffery is a veteran target who is aiming to make his season debut after offseason foot surgery, while Jackson and Reagor have suffered respective injuries this season.

Despite three faces moving closer to returning to the Eagles offense, Fulgham’s early season impact could see him stay in the wide receiver rotation with 11 games left to play.

“You’re right [with receivers close to returning],” Pederson said. “We’re hopeful that [WR] DeSean [Jackson] gets incorporated into practice this week. We’re obviously hopeful that [WR] Alshon [Jeffery] gets back out there this week. You know, we’ve got to make sure that these two guys obviously are healthy first, right, No. 1 and make sure they are 100 percent heading into the game.”

Jackson seems the most likely to return to the field after practicing last week while Reagor (hand) and Jeffery (foot) remain out of contact practices. Another tough test for the Eagles approaches this Sunday with the Baltimore Ravens coming to Lincoln Financial Field before the Eagles also prepare to face NFC East rivals, the New York Giants (twice in four weeks) and Dallas Cowboys (albeit without starting quarterback Dak Prescott).

With more healthy receivers to choose from, the better the Eagles could be at fixing the offensives struggles and making a run at a Division title and playoff spot.

“We’ve got to see where they are, first of all, from a health standpoint,” Pederson said about Jackson and Jeffery. “We’re sitting here today on a Monday, and we’re hopeful, but again, we’re also realistic from the standpoint of the guys that are in the game have been playing well. Has it been perfect? No, it hasn’t. But they are playing hard. They are playing fast. And its things that we can coach and teach, and continue to get better at with these young guys.”