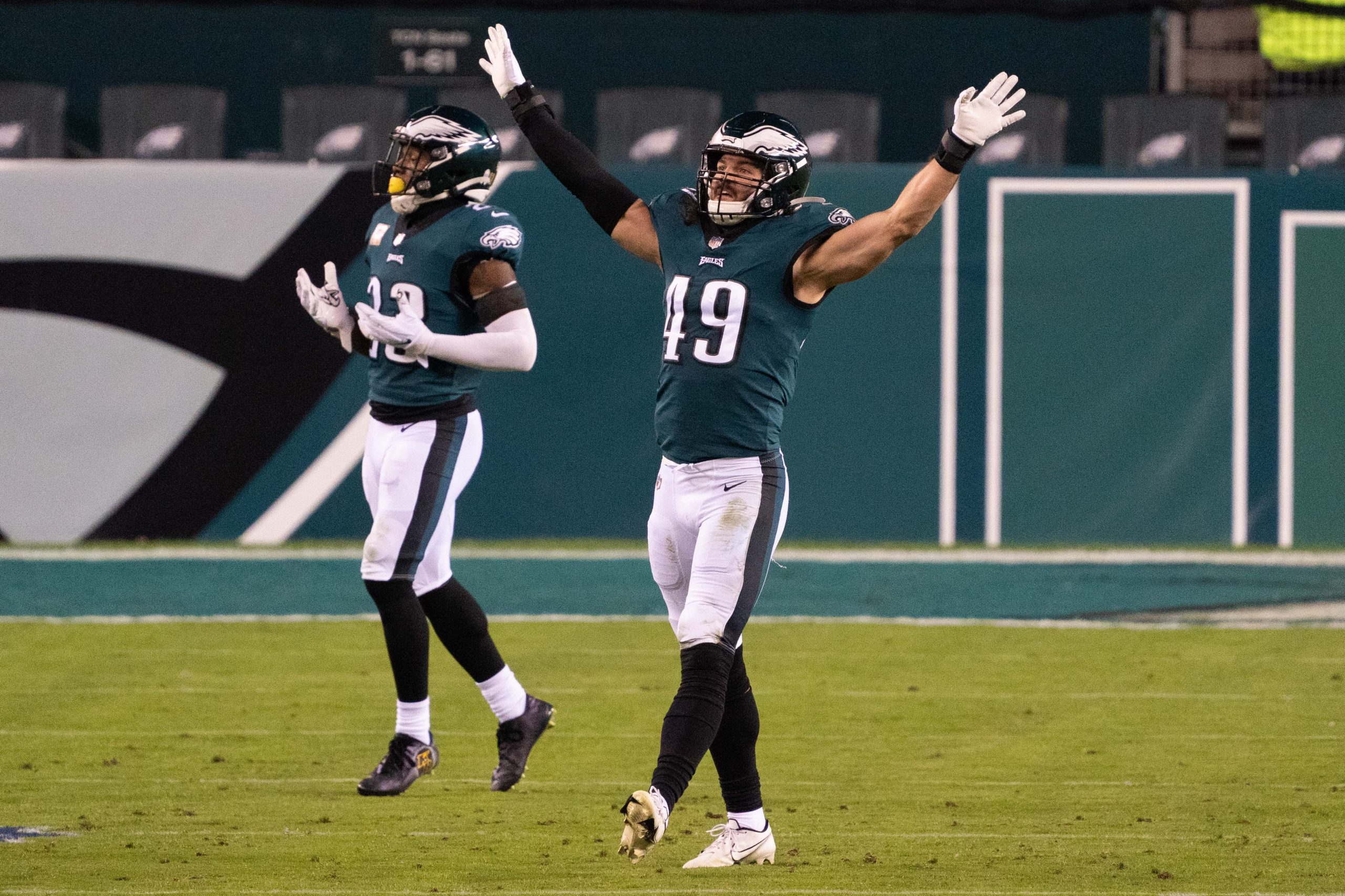 Alex Singleton got to watch a lot of football during the 2019 NFL season, but since has developed into an impressive player for the Philadelphia Eagles in 2020.

The 26-year-old has stepped in Jim Schwartz’s defense and played a key role in helping the Birds remain alive for an NFC East title. Singleton has mainly been a practice squad player during his NFL career so far, spending time with the Seattle Seahawks, New England Patriots, and Minnesota Vikings while also appearing in the Canadian football League from 2016-19.

After joining the Eagles practice squad last season, Singleton has become a starter in 2020 and has not disappointed in what has been an underachieving season as a whole so far.

“He’s always been a good football player,” Schwartz said in a press conference. “He’s still learning. I’m going to quote Bill Parcells, ‘let’s not put him in the Hall of Fame just yet.’ And I say that with a lot of respect for Alex. He plays tough and really brings some things to our defense. But he’s not 100 percent clean in his game. He’d probably be the first person to tell you that and there’s still things that he’s developing through and he’s still working at.”

“But just knowing him and his character, he’s going to work at it to get it right. There were a couple plays left on the field and this goes to all great players, and probably any player in the NFL, they don’t really think about their success. They think about the plays that they gave up on the field, the plays that they had a chance to make, but maybe took a wrong step or looked at the wrong thing and that’s the only way you get better. That’s the only way you keep improving.”

Singleton played his college ball at Montana State before being a first-round pick in the CFL Draft in 2016 by the Calgary Stampeders. He excelled in Canada, being a two-time All-Star (2017, 2018), winning the league’s Most Outstanding Defensive Player Award (2017), and also winning the 2018 Grey Cup with Calgary.

Since then he has gotten the opportunities to learn the NFL game with the Eagles before jumping into the scene this season. Singleton has recorded 60 total tackles in Schwartz’s defense so far while also recording a 30-yard interception return for a touchdown, one fumble recovery, and one sack. He might not be the biggest name on the Eagles’ defense or even the linebacking corps, but it hasn’t stopped him from giving a 110% effort in every game he’s featured in.

Alex Singleton gets a gift and takes it to the house.#PHIvsSF | #FlyEaglesFly

“You have to be critical of yourself and you have to look at the things that you need to clean up and not just sort of get drunk on your success so to speak,” Schwartz said. “I really like Alex’s mentality that way. Makes mistakes like a lot of young players do or players that are playing for the first time. Gets them corrected and moves on. I think that he’s definitely earning his wings, so to speak, but he’s still a work in progress and he’s still a guy that needs to grind through and iron some things out. But I like where he’s trending, and I think it’s a nice plus for our defense right now.”

“He’s done a great job for us,” Eagles special teams coordinator Dave Fipp said. “He’s been a four-core player for us this year. He did the same last year for us when he’s been up. I know his role on defense has changed a little bit. Those guys roles have fluctuated throughout the year and in the beginning of the year he wasn’t playing as much, [LB] Nate Gerry was playing more. Obviously, there’s been some injury at that position. I think there’s been some adjustment in some of those guys’ roles at that position, also. But no, we’re happy with his performance for us, certainly, and we’re going to try to use him as much as we can. That being said, we are always cognizant of how much those guys are playing and we’re trying to make sure we keep them out of harm’s way that way.”

Singleton’s breakout season will continue on Monday Night Football with the Eagles (3-6-1) looking to end a two-game losing streak against the visiting Seattle Seahawks.